This global financial fraud and its gatekeepers 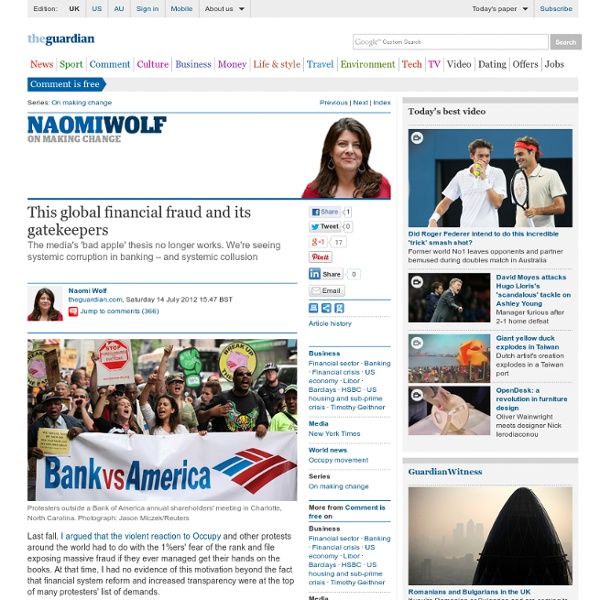 Last fall, I argued that the violent reaction to Occupy and other protests around the world had to do with the 1%ers' fear of the rank and file exposing massive fraud if they ever managed get their hands on the books. At that time, I had no evidence of this motivation beyond the fact that financial system reform and increased transparency were at the top of many protesters' list of demands. But this week presents a sick-making trove of new data that abundantly fills in this hypothesis and confirms this picture. The notion that the entire global financial system is riddled with systemic fraud – and that key players in the gatekeeper roles, both in finance and in government, including regulatory bodies, know it and choose to quietly sustain this reality – is one that would have only recently seemed like the frenzied hypothesis of tinhat-wearers, but this week's headlines make such a conclusion, sadly, inevitable. And what, in fact, happened? And then what happened? And then what happened?

Barclays fined £59.5 million for significant failings in relation to LIBOR and EURIBOR FSA/PN/070/201227 Jun 2012 The Financial Services Authority (FSA) has today fined Barclays Bank Plc (Barclays) £59.5 million for misconduct relating to the London Interbank Offered Rate (LIBOR) and the Euro Interbank Offered Rate (EURIBOR). This is the largest fine ever imposed by the FSA. Barclays’ breaches of the FSA’s requirements encompassed a number of issues, involved a significant number of employees and occurred over a number of years. making submissions which formed part of the LIBOR and EURIBOR setting process that took into account requests from Barclays’ interest rate derivatives traders. In addition, Barclays failed to have adequate systems and controls in place relating to its LIBOR and EURIBOR submissions processes until June 2010 and failed to review its systems and controls at a number of appropriate points. Tracey McDermott, acting director of enforcement and financial crime, said: “Barclays’ misconduct was serious, widespread and extended over a number of years.

Barclays Bank PLC Admits Misconduct Related to Submissions for the London Interbank Offered Rate and the Euro Interbank Offered Rate and Agrees to Pay $160 Million Penalty WASHINGTON – Barclays Bank PLC, a financial institution headquartered in London, has entered into an agreement with the Department of Justice to pay a $160 million penalty to resolve violations arising from Barclays’s submissions for the London InterBank Offered Rate (LIBOR) and the Euro Interbank Offered Rate (EURIBOR), which are benchmark interest rates used in financial markets around the world, announced Assistant Attorney General Lanny A. Breuer of the Justice Department’s Criminal Division and Assistant Director in Charge James W. McJunkin of the FBI’s Washington Field Office. As part of the agreement with the Department of Justice, Barclays has admitted and accepted responsibility for its misconduct set forth in a statement of facts that is incorporated into the agreement. “LIBOR and EURIBOR are critically important benchmark interest rates,” said Assistant Attorney General Breuer. The agreement and monetary penalty recognize Barclays’s extraordinary cooperation.

New York Fed's Libor Documents Reveal Cozy Relationship Between Regulators, Banks The New York Federal Reserve on Friday released documents showing it knew banks were manipulating a key interest rate more than four years ago. The documents, which date back to 2007, show that the Fed became fully aware that banks were lying about their borrowing costs when setting Libor, and chose to take no action against them. The documents will likely feed growing concerns about whether the New York Fed, its former chief Timothy Geithner and other market watchdogs did everything they could to stop the manipulation. "We know that we’re not posting um, an honest LIBOR," a Barclays employee tells a New York Fed analyst in an April 11, 2008, call, "and yet we are doing it, because, um, if we didn’t do it, It draws, um, unwanted attention on ourselves." The New York Fed representative expresses sympathy and understanding: "You have to accept it," she says. In the documents released Friday -- at the request of Rep.

Libor scandal Scale of the scandal This dwarfs by orders of magnitude any financial scam in the history of markets.[1][2] The banks are supposed to submit the actual interest rates they are paying, or would expect to pay, for borrowing from other banks. The Libor is supposed to be the total assessment of the health of the financial system because if the banks being polled feel confident about the state of things, they report a low number and if the member banks feel a low degree of confidence in the financial system, they report a higher interest rate number. In June 2012, multiple criminal settlements by Barclays Bank revealed significant fraud and collusion by member banks connected to the rate submissions, leading to the scandal.[5][6][7] Because Libor is used in US derivatives markets, an attempt to manipulate Libor is an attempt to manipulate US derivatives markets, and thus a violation of American law. Early reports of Libor manipulation[edit] WSJ Libor study[edit] Libor manipulation to lower rate