The inspiring heroism of Aaron Swartz 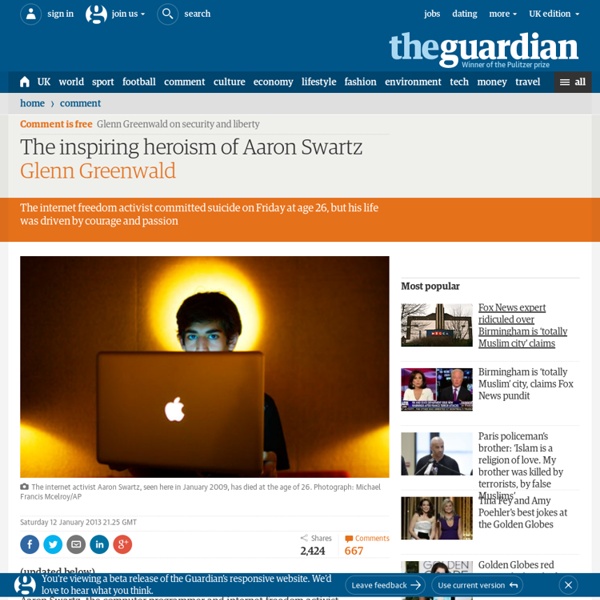 (updated below)Aaron Swartz, the computer programmer and internet freedom activist, committed suicide on Friday in New York at the age of 26. As the incredibly moving remembrances from his friends such as Cory Doctorow and Larry Lessig attest, he was unquestionably brilliant but also - like most everyone - a complex human being plagued by demons and flaws. For many reasons, I don't believe in whitewashing someone's life or beatifying them upon death. But, to me, much of Swartz's tragically short life was filled with acts that are genuinely and, in the most literal and noble sense, heroic. I think that's really worth thinking about today. At the age of 14, Swartz played a key role in developing the RSS software that is still widely used to enable people to manage what they read on the internet. But rather obviously, Swartz had little interest in devoting his life to his own material enrichment, despite how easy it would have been for him. Suicide is an incredibly complicated phenomenon.

Chris Dodd’s paid SOPA crusading Chris Dodd’s emphatic 2010 pledge not to lobby once he finally left the Senate was prompted by widespread speculation that he spent the last two years in office blatantly shilling for corporate interests in order to ensure a prosperous post-Congress career. Particularly during the 2010 financial reform debate — when it became increasingly apparent that allegations of improper benefits from Countrywide Financial would make his re-election close to impossible — Dodd served on multiple occasions as chief spokesman for , and defender of , the interests of Wall Street and corporate America . Though sleazy and grotesque, it was therefore entirely unsurprising when it was announced last March that Dodd would “be Hollywood’s leading man in Washington, taking the most prestigious job on K Street”: Chairman and CEO of the Motion Picture Association of America (MPAA), “whose perks include a $1.2 million-a-year salary and getting to attend the Academy Awards ceremony.”

Remember Aaron Swartz by working for open society and against government abuses | Dan Gillmor As we mourn Aaron Swartz, let’s save energy for some anger — and activism. Aaron, whose work was entirely about making our world a better place, died by his own hand. He was 26, and he had a history of depression. But the demons that carried him over the edge surely got a boost from the United States government, which was prosecuting Aaron in a manner that demonstrated contempt for the facts, fairness, and the justice system itself. The case against Aaron, an object lesson of what happens when authority is cynically abused by the people in power, threatened more than Aaron’s liberty and his great work. So amid my grief for Aaron, I’m angry — and committed to working for honorable enforcement of rational laws, and for values Aaron exemplified in his short life. Aaron had made his presence known early. I didn’t meet Aaron until 2002, at a World Wide Web conference in Hawaii, though I’d heard of him and his work. His contributions were numerous, and some of them were indispensable.

Edward Snowden did NOT lie: Michael Green responds to Kevin Ryan Kevin Ryan Has Unfairly Smeared Edward Snowden January 5, 2014 Kevin Ryan’s recent article, “Flirting with Sauron: The Risks of Trusting the Snowden Story” seriously and unfairly tarnishes the integrity of a likely hero, wrongly calling Edward Snowden a liar. By first misreading and then altering a Guardian quote from Snowden, Ryan claims falsely to have caught Snowden in a flagrant lie. Ryan then (mis)uses that “lie” to impugn and impeach Snowden’s credibility, effectively implicating Snowden as a co-conspirator or principal in Greenwald’s ostensibly shady self-serving dealings with Paypal billionaire Pierre Omidyar.Ryan’s article presents no new facts or insights about Glenn Greenwald’s questionable behavior, nor any legitimate basis for linking Edward Snowden to Greenwald’s putative misbehavior in any way except as its victim. Kevin Ryan owes Edward Snowden a public apology. Ryan wrote: It was originally reported that the number of documents Snowden had stolen was in the thousands.

The Internet’s Own Boy: Film on Aaron Swartz Captures Late Activist’s Struggle for Online Freedom This is a rush transcript. Copy may not be in its final form. AMY GOODMAN: We’re broadcasting from Park City TV in Utah, home of the Sundance Film Festival, the largest festival for independent cinema in the United States. Today, we spend the hour with the people involved in an incredible documentary that just had its world premiere here yesterday. AARON SWARTZ: I mean, I, you know, feel very strongly that it’s not enough to just live in the world as it is, to just kind of take what you’re given and, you know, follow the things that adults told you to do and that your parents told you to do and that society tells you to do. AMY GOODMAN: That was Aaron Swartz in his early twenties. In 2010, Aaron Swartz became a fellow at Harvard University’s Edmond J. Now, despite promises of reform, the Computer Fraud and Abuse Act used to charge Swartz remains unchanged. REP. SEN. TAREN STINEBRICKNER-KAUFFMAN: I don’t think anybody really thought that SOPA could be beaten. [break] ROBERT SWARTZ: Yeah.

In quotes: Tributes to Aaron Swartz 13 January 2013Last updated at 06:37 ET Swartz developed RSS at an early age Friends and admirers have been paying tribute to Aaron Swartz, a prominent US internet activist who has died at the age of 26. Below is a selection of some of the many quotes posted online after Mr Swartz's death on Saturday, in what authorities say was a suicide. tweets: "Aaron dead. writes: "Aaron did more than almost anyone to make the Internet a thriving ecosystem for open knowledge, and to keep it that way. While his methods were provocative, the goal that Aaron died fighting for - freeing the publicly-funded scientific literature from a publishing system that makes it inaccessible to most of those who paid for it - is one that we should all support. Moreover, the situation Aaron found himself in highlights the injustice of US computer crime laws, and particularly their punishment regimes." blogs: "Here is where we need a better sense of justice, and shame. I love Aaron.

The Truth about Aaron Swartz’s “Crime” « Unhandled Exception I did not know Aaron Swartz, unless you count having copies of a person’s entire digital life on your forensics server as knowing him. I did once meet his father, an intelligent and dedicated man who was clearly pouring his life into defending his son. My deepest condolences go out to him and the rest of Aaron’s family during what must be the hardest time of their lives. If the good that men do is oft interred with their bones, so be it, but in the meantime I feel a responsibility to correct some of the erroneous information being posted as comments to otherwise informative discussions at Reddit, Hacker News and Boing Boing. Apparently some people feel the need to self-aggrandize by opining on the guilt of the recently departed, and I wanted to take this chance to speak on behalf of a man who can no longer defend himself. I was the expert witness on Aaron’s side of US vs Swartz, engaged by his attorneys last year to help prepare a defense for his April trial. The facts: Like this:

Aitzaz Hasan Aitzaz Hasan[2] (Urdu: اعتزاز حسن‎) was a Pakistani school boy from Hangu District in Khyber Pakhtunkhwa province who sacrificed his life while preventing a suicide bomber from entering his school of 2,000 students at Ibrahimzai village of Hangu, on January 6, 2014.[3] Aitzaz's action to save his classmates captured the hearts of many in Pakistan, and he was hailed as a national hero.[4] For his act, the office of Pakistan Prime Minister Nawaz Sharif has advised President Mamnoon Husain to confer Aitzaz Hasan with the high civil award of Sitara-e-Shujaat (Star of Bravery) by the Government of Pakistan.[1][5] Life[edit] Aitzaz Hasan was the son of Mujahid Ali.[6] His family included his mother, brother and two sisters. Aitzaz Hasan was a 9th grader at the Ibrahimzai high school. Death[edit] According to other accounts, Aitzaz was on his way to school when he spotted a suspicious person. Aitzaz died in the hospital.[7] No other students were harmed. [edit] Awards and honours[edit]