All Can Be Lost: The Risk of Putting Our Knowledge in the Hands of Machines - Nicholas Carr 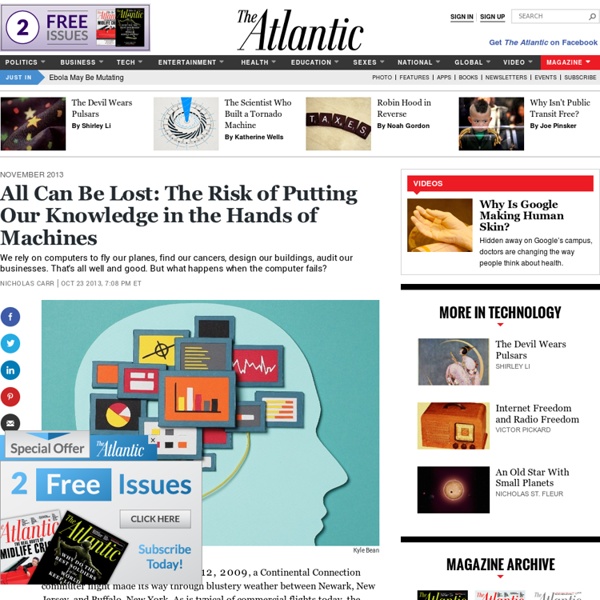 We rely on computers to fly our planes, find our cancers, design our buildings, audit our businesses. That's all well and good. But what happens when the computer fails? On the evening of February 12, 2009, a Continental Connection commuter flight made its way through blustery weather between Newark, New Jersey, and Buffalo, New York. As is typical of commercial flights today, the pilots didn’t have all that much to do during the hour-long trip. The crash, which killed all 49 people on board as well as one person on the ground, should never have happened. The Buffalo crash was not an isolated incident. The first automatic pilot, dubbed a “metal airman” in a 1930 Popular Science article, consisted of two gyroscopes, one mounted horizontally, the other vertically, that were connected to a plane’s controls and powered by a wind-driven generator behind the propeller. And that, many aviation and automation experts have concluded, is a problem. Who needs humans, anyway?

The Glass Cage | Nicholas Carr “Essential … Read it yourself. Read the whole book.” —New York Times Book Review “The Glass Cage should be required reading for everyone with a phone.” —Jonathan Safran Foer “Carr’s prose is elegant, and he has an exceptional command of the facts. What kind of world are we building for ourselves? Digging behind the headlines about factory robots and self-driving cars, wearable computers and digitized medicine, Carr explores the hidden costs of granting software dominion over our work and our leisure. Drawing on psychological and neurological studies that underscore how tightly people’s happiness and satisfaction are tied to performing meaningful work in the real world, Carr reveals something we already suspect: shifting our attention to computer screens can leave us disengaged and discontented. Buy the book: IndieBound : Amazon : Barnes & Noble : Powell’s : 800ceoread : iBookstore Praise for The Glass Cage: “Nicholas Carr is among the most lucid, thoughtful, and necessary thinkers alive.

The Disconnectionists “Unplugging” from the Internet isn’t about restoring the self so much as it about stifling the desire for autonomy that technology can inspire Once upon a pre-digital era, there existed a golden age of personal authenticity, a time before social-media profiles when we were more true to ourselves, when the sense of who we are was held firmly together by geographic space, physical reality, the visceral actuality of flesh. Without Klout-like metrics quantifying our worth, identity did not have to be oriented toward seeming successful or scheming for attention. TNI Vol. 22: Self-Help is out now. According to this popular fairytale, the Internet arrived and real conversation, interaction, identity slowly came to be displaced by the allure of the virtual — the simulated second life that uproots and disembodies the authentic self in favor of digital status-posturing, empty interaction, and addictive connection. Baratunde Thurston writes, Such rhetoric is common. Please fill in all fields

Five Creepiest Advances in Artificial Intelligence Already, the electronic brains of the most advanced robotic models surpass human intelligence and are able to do things that will make some of us shudder uncomfortably. But what is your reaction going to be after learning about recent advances in robotics and artificial intelligence? 5. Schizophrenic robot Scientists at the University of Texas (Austin) have simulated mental illness for a computer, testing schizophrenia on artificial intelligence units. The test subject is DISCERN – a supercomputer that functions as a biological neural network and operates using the principles of how human brain functions. The researchers then emulated schizophrenic brain in artificial intelligence by overloading the computer with many stories. 4. Professor Roland Arkin from the School of interactive computing at the University of Georgia presented the results of an experiment in which scientists were able to teach a group of robots to cheat and deceive. The experiment involved two robots. 3. 2. 1.

Why Women Still Can’t Have It All - Anne-Marie Slaughter The culture of “time macho”—a relentless competition to work harder, stay later, pull more all-nighters, travel around the world and bill the extra hours that the international date line affords you—remains astonishingly prevalent among professionals today. Nothing captures the belief that more time equals more value better than the cult of billable hours afflicting large law firms across the country and providing exactly the wrong incentives for employees who hope to integrate work and family. Yet even in industries that don’t explicitly reward sheer quantity of hours spent on the job, the pressure to arrive early, stay late, and be available, always, for in-person meetings at 11 a.m. on Saturdays can be intense. Indeed, by some measures, the problem has gotten worse over time: a study by the Center for American Progress reports that nationwide, the share of all professionals—women and men—working more than 50 hours a week has increased since the late 1970s. Revaluing Family Values

Why Citizen Developers Are The Future Of Programming If you ever wondered what would scare the bejeezus out of a university's computer science department, try this: In June, Google revealed that it no longer considers GPA scores as a hiring criteria. “One of the things we’ve seen from all our data crunching is that GPA's are worthless as a criteria for hiring,” Laszlo Bock, senior vice president of people operations at Google, told the New York Times. To students who have been told their university grades are paramount, that's a big shock. The “Citizen Developer” When Google executives look at prospective hires’ portfolios instead of test scores, it expands the playing field beyond “anyone with a degree” to “anyone with skills.” It’s a phenomenon that the tech world is calling the rise of the “citizen developer.” Back in 2011, Gartner predicted that by 2014, citizen developers would build at least 25 percent of new business applications. See also Don’t Look Now, But We Might Be In A Developer Drought Tons of Jobs, Few Developers

MLA Format - MLA Guidelines .:. MLAFormat.org The problem with algorithms: magnifying misbehaviour | News By the time you read these words, much of what has appeared on the screen of whatever device you are using has been dictated by a series of conditional instructions laid down in lines of code, whose weightings and outputs are dependent on your behaviour or characteristics. We live in the Age of the Algorithm, where computer models save time, money and lives. Gone are the days when labyrinthine formulae were the exclusive domain of finance and the sciences - nonprofit organisations, sports teams and the emergency services are now among their beneficiaries. Even romance is no longer a statistics-free zone. But the very feature that makes algorithms so valuable - their ability to replicate human decision-making in a fraction of the time - can be a double-edged sword. The prejudiced computer As detailed here in the British Medical Journal, staff at St George's Hospital Medical School decided to write an algorithm that would automate the first round of its admissions process.

MLA Format on Microsoft Word 2013 This tutorial will guide you through the process of setting up Microsoft Word 2013 for your MLA Format paper. It is very easy and we are going to accomplish the following settings: I. How to Set the Font and Size: When you first start Word 2013, you are placed under the Home tab (like in the image below), if not, click on the Home tab. Click on the font and select Times New Roman.Click on the size and select 12. Note: If you already typed your text, you need to select all your text before you select the font in order to apply the text to the new font. II. Click on Page Layout => then click on Margins. III. To create a header with your last name and automatic page numbering, click Insert => Page Number => Top of Page => then click on Plain Number 3. IV. Click on the Home tab.Click on the Line Spacing button.Click on 2.0. V. VI. Follow this how-to when you are ready to work on your Works Cited page. A heading “Works Cited” centered one inch below the top edge of a new page. Sample:

The Jobs Smart Bots will Kick to the Curb | HomeFree America IN the not too distant past, technological advances destroyed work selectively* within the industrial bureaucratic system. At worst, it destroyed industries or a job category. At best, it merely eliminated drudgery by eliminating routine or time consuming work tasks. That’s not true anymore. As we are already seeing in the workplace, the wholesale destruction of the work we currently do within the industrial bureaucracy, and the American Dream attached to it, is being swept to the sidelines. Here the primary reasons this technological shift is possible: Better decision making. The upshot of this technological change is that the industrial bureaucracy is going to shrink and more quickly than we experienced with agriculture. To get some insight into the amount of work that is at risk right now, with existing technology, let’s take a look at a study by Carl Frey and Michael Osborne at Oxford University called, “The Future of Employment: How Susceptible are Jobs to Computerization?.”

Implied Subject Determines Comma | Zen Comma I believe education organizations (e.g., schools, districts, state departments of education) have an obligation to model correct English. Among other responsibilities, they are charged with helping children become successful, contributing members of society, and this means teaching children to communicate well. For this to happen, educators, at all levels, need to demonstrate the highest standard of language use. Children not only learn what they are formally taught but also learn what they observe. The Sample With this in mind, I found the following misuse of commas on a school district website. Once logged in, highlight the Grades menu, and choose Grades to view your student’s current grades. This has two commas. First Comma: CORRECT The first comma follows the introductory phrase Once logged in. Second Comma: INCORRECT Now look at the second comma. When we put the subject in the sentence, we get this: Now that the subject is in place, we see that the sentence has a compound predicate.

The Algorithms of Our Lives Phototrails.net The author and several colleagues studied cultural differences using these computerized patterns of Instagram postings—arranged by hue and brightness—from Tokyo, New York, Bangkok, and San Francisco. In 2002, I was in Cologne, Germany, and I went into the best bookstore in the city devoted to humanities and arts titles. Its new-media section contained hundreds of books. However, not a single title was about the key driver of the "computer age": software. I started going through indexes of book after book: No "software." Yet in the 1990s, software-based tools were adopted in all areas of professional media production and design. Thanks to practices pioneered by Google, the world now operates on web applications that remain forever in beta stage. Software has become a universal language, the interface to our imagination and the world. It's time they did. If you are a scholar working inside Google or Facebook, you have a major advantage over colleagues in academe.