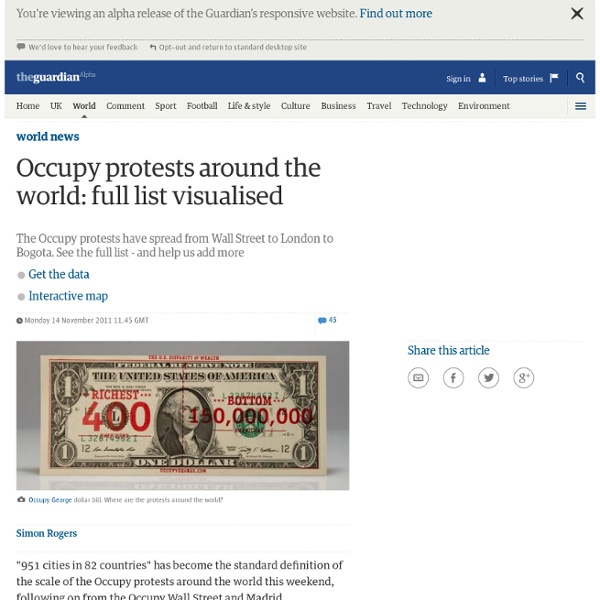 "951 cities in 82 countries" has become the standard definition of the scale of the Occupy protests around the world this weekend, following on from the Occupy Wall Street and Madrid demonstrations that have shaped public debate in the past month. We wanted to list exactly where protests have taken place as part of the Occupy movement - and see exactly what is happening where around the globe. With your help, adding events in our form below, we've been able to show 750 Occupy events world wide. As we wrote this week: Protests inspired by the Occupy Wall Street movement in New York and the "Indignants" in Spain have spread to cities around the world. So, we have started listing all the events we can find verified news reports for. But what have we missed? Download the data • DATA: download the full spreadsheet More open data Data journalism and data visualisations from the Guardian World government data • Search the world's government data with our gateway Development and aid data

Social Media Maps Provide Global View of Occupy Wall Street One month after the first protesters showed up on Wall Street, similar movements have popped up in cities throughout the world — and many more are being planned or discussed. As "Occupy Wall Street" evolves into "Occupy Everywhere," several new services are mapping the social media chatter surrounding them. Similar to the dashboards news outlets like Al Jazeera and independent projects like IAmJan25 and HyperCities created to track social media surrounding the Arab Spring, Occupy Wall Street maps now show where relevant geotaged tweets, YouTube videos and Flickr images are being posted, in real time. "I don't really have a strong political opinion," says Humphrey Flowerdew, who started mapping Occupy Wall Street tweets on Cravify.com. "I'm just interested in technology and what practical things you can do with it." He and his partner Trung Huynh, who are both based in London, originally built Cravify to aggregate and map real estate listings.

Occupy movement The Occupy movement is an international protest movement against social and economic inequality, its primary goal being to make the economic and political relations in all societies less vertically hierarchical and more flatly distributed. Local groups often have different foci, but among the movement's prime concerns deal with how large corporations and the global financial system control the world in a way that disproportionately benefits a minority, undermines democracy, and is unstable.[8][9][10][11] The first Occupy protest to receive widespread attention was Occupy Wall Street in New York City's Zuccotti Park, which began on 17 September 2011. Background[edit] Protests in 1–4 cities Protests in 5–9 cities Protests in 10 or more cities "We are the 99%" slogan[edit] Goals[edit] During the early weeks, the movement was frequently criticized by the news media for having no clearly defined goals. Methods[edit] Assembly hand signals Structure[edit] Nonviolence[edit]

MotherJones The loose-knit protest movement known as Occupy Wall Street has stirred action from New York City to LA and spread overseas. Here we present an expanding map of protest hot spots and reported arrests, and track the movement's growth. Check back often for updates—and check out all the rest of MoJo's #OWS coverage here. Protests taking place beyond Manhattan: What began as a call for Americans to gather in New York's Financial District has given rise to like-minded actions nationwide and far beyond. Click on the dots for details from more than 462 locations and over 3,200 arrests (last updated: November 20, 9:30 p.m. Know of more locations for this map? Map production by Lauren Ellis, Samantha Oltman, and Tasneem Raja. How rich are the superrich? A huge share of the nation's economic growth over the past 30 years has gone to the top one-hundredth of one percent, who now make an average of $27 million per household. A timeline of the Occupy Wall Street movement:

Occupy Wall Street: The Most Important Thing in the World Now Published in The Nation. I was honored to be invited to speak at Occupy Wall Street on Thursday night. Since amplification is (disgracefully) banned, and everything I said had to be repeated by hundreds of people so others could hear (a.k.a. “the human microphone”), what I actually said at Liberty Plaza had to be very short. With that in mind, here is the longer, uncut version of the speech. I love you. And I didn’t just say that so that hundreds of you would shout “I love you” back, though that is obviously a bonus feature of the human microphone. Yesterday, one of the speakers at the labor rally said: “We found each other.” If there is one thing I know, it is that the 1 percent loves a crisis. And there is only one thing that can block this tactic, and fortunately, it’s a very big thing: the 99 percent. That slogan began in Italy in 2008. “Why are they protesting?” But there are important differences too. Occupy Wall Street, on the other hand, has chosen a fixed target. - What we wear.

map: Thousands of students prepare to 'Occupy' colleges LOS ANGELES (RNN) - College students across the country are preparing for Thursday's national day of protests in unity with the Occupy Wall Street movement. As of Wednesday evening, 90 colleges were confirmed for Occupy College's "National Student Solidarity Protest," according to the group's website. Natalia Abrams, a spokeswoman and facilitator for the group, expects the number to surpass 100. This will be the second protest of the fledgling group, which sponsored a walk-out on college campuses Oct. 5. Thursday's protests are planned for 4:30 p.m. ET. [SLIDESHOW: Occupy Wall Street protests spread] "It's not specifically a walk-out, because we don't want to confuse the protest," Abrams said about the new Occupy Colleges event. Instead, participating colleges are encouraged to host sit-ins and readings, in which they can spread awareness about the Occupy Wall Street movements and how they can become involved at a grassroots level. Abrams also has a message to deliver to skeptics.

Occupy Wall Street Growth Map: How Fast Are 'Occupy' Facebook Pages Growing? From the initial call to occupy Wall Street until the present day, the 'Occupy' movement has grown across the country and spread around the world. Using data from Collective Disorder on different 'Occupy' cities' Facebook pages, The Huffington Post has created a map that shows the movement's increasing popularity over time. Click the play button on the map to view the movement's growth from October 3 through November 9. NOTES ON THE MAP:The data for this map comes from developer Shane Castlen and the Facebook API. The larger the circle size on the map, the greater the number of Facebook likes. New groups have formed and been discovered since October 3, when page data was first collected. If you've been to an Occupy Wall Street event anywhere in the country, we'd like to hear from you.

Global Square Next meeting of GlobalSquare (also known as Occupy the WSF initiative) Our next meeting Date: Thursday, 17th of January 2013Time: 19.00 GMT in Mumble, for other locations please use the time zone converterLocation: Occupytalk.org server, room: Assemblies & Round Tables > OPEN SPACEPad for agenda and minutes: (add your proposals here) About our initiative From 26-30 March 2013 the World Social Forum (WSF) will take place in Tunis. To discuss and organize our participation in the WSF, we started an open communication process through regular online meetings and a mailing list, building a space open to a variety of initiatives, gathering particularly participants from the various movements mostly emerged throughout the year 2011 (Tunisia, Egypt, Senegal, Morocco, Spain, Chile, United States, Quebec, etc). The coming months we will continue to develop these plans. How to use Mumble How to get involved