The Evolution of the English Alphabet.

Yehweh not Yahweh is an exhaustive (thesis-sized), non-fiction, non-profit, Messianic book about the most accurate pronunciation of the tetragrammaton using the original Hebrew.

It's in progress* (since 2006) by British-New Zealand author Jane E Lythgoe (nee Marchant), and edited by Jeremy D Lythgoe (her American husband). British Council. How ampersand came from a misunderstanding. The Hebrew Alphabet in Capital Letters. The Hebrew word for "letter" is ot (אוֹת), which can also mean "sign" or "wonder. 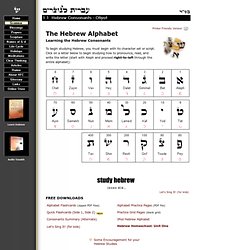 " Each letter of the Aleph-Bet, then, may contain signs that point to wonderful truths about life. Proto-Sinaitic. Proto-Sinaitic, also known as Proto-Canaanite, was the first consonantal alphabet. 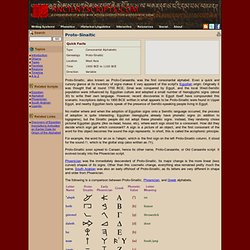 Even a quick and cursory glance at its inventory of signs makes it very apparent of this script's Egyptian origin. Originally it was thought that at round 1700 BCE, Sinai was conquered by Egypt, and the local West-Semitic population were influenced by Egyptian culture and adopted a small number of hieroglyphic signs (about 30) to write their own language. However, recent discoveries in Egypt itself have compounded this scenario. Inscriptions dating to 1900 BCE written in what appears to be Proto-Sinaitic were found in Upper Egypt, and nearby Egyptian texts speak of the presence of Semitic-speaking people living in Egypt. Phoenician. The Phoenician script is an important "trunk" in the alphabet tree, in that many modern scripts can be traced through it. 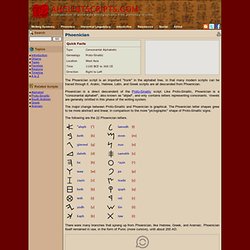 Arabic, Hebrew, Latin, and Greek scripts are all descended from Phoenician. Phoenician is a direct descendent of the Proto-Sinaitic script. Like Proto-Sinaitic, Phoenician is a "consonantal alphabet", also known as "abjad", and only contains letters representing consonants. Vowels are generally omitted in this phase of the writing system. Old Hebrew. While many associate written Hebrew with the squarish letters adorned by curvy flourishes and occasionally vowel marks, Hebrew was originally written with a different, but related, script called Old Hebrew. 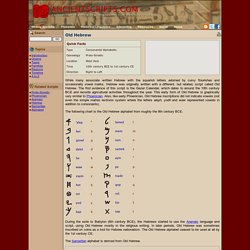 The first evidence of this script is the Gezer Calendar, which dates to around the 10th century BCE and records agricultural activities throughout the year. This early form of Old Hebrew is graphically very similar to Phoenician. Vii. Speaking Ancient Hebrew Is Easy - Compared to Modern Jewish Hebrew - Yehweh Not Yahweh. The Most Accurate Pronunciation Using the Original Hebrew vii. 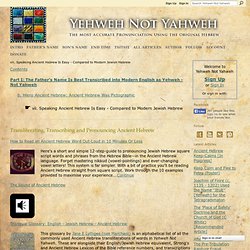 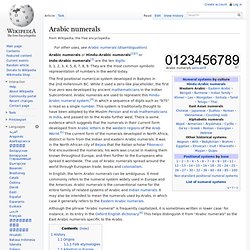 They are the most common symbolic representation of numbers in the world today. The first positional numerical system developed in Babylon in the 2nd millennium BC. While it used a zero-like placeholder, the first true zero was developed by ancient mathematicians in the Indian Subcontinent. Arabic numerals are used to represent this Hindu-Arabic numeral system,[4] in which a sequence of digits such as "975" is read as a single number. This system is traditionally thought to have been adopted by the Muslim Persian and Arab mathematicians in India, and passed on to the Arabs further west. I. The English and Greek Alphabets Are Semitic-Israelite Alphabets - Yehweh Not Yahweh.

Contents Part I: The Father's Name Is Best Transcribed into Modern English as Yehweh - Not Yahweh a. 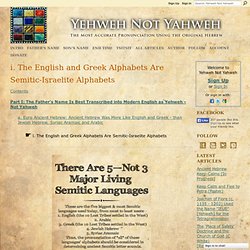 Euro Ancient Hebrew: Ancient Hebrew Was More Like English and Greek - than Jewish Hebrew, Syriac Aramaic and Arabic ☛ i. Old English. Old English (Ænglisc, Anglisc, Englisc) or Anglo-Saxon[1] is an early form of the English language that was spoken and written by the Anglo-Saxons and their descendants in parts of what are now England and southern and eastern Scotland between at least the mid-5th century and the mid-12th century. 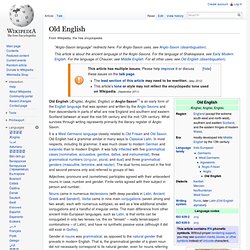 What survives through writing represents primarily the literary register of Anglo-Saxon. Adjectives, pronouns and (sometimes) participles agreed with their antecedent nouns in case, number and gender. Finite verbs agreed with their subject in person and number. Gender in nouns was grammatical, as opposed to the natural gender that prevails in modern English. That is, the grammatical gender of a given noun did not necessarily correspond to its natural gender, even for nouns referring to people. Middle English. The Evolution of the English Alphabet Chart [In Progress] – Yehweh Not Yahweh.

The Evolution of the English Alphabet Chart shows how over the last 4000 years the English alphabet along with at least 13 other major alphabets has evolved (or rather mutated) out of the Ancient Hebrew alphabet. 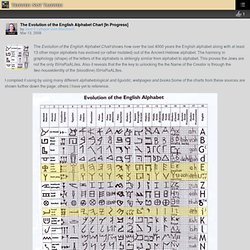 The harmony in graphology (shape) of the letters of the alphabets is strikingly similar from alphabet to alphabet. This proves the Jews are not the only ISHaRaALites. Also it reveals that the the key to unlocking the the Name of the Creator is through the two-houseidentity of the (bloodline) ISHaRaALItes. I compiled it using by using many different alphabetological and liguistic, webpages and books.Some of the charts from these sources are shown further down the page; others I have yet to reference.

To view image—left click on it, and then right click and your zoom tool should appear, or you can right click and then save as to your PC. a) Y—this has been moved from the hand and arm pictograph (ID [Modern Jewish Hebrew (MJH) yod]) row to the tent peg (UU [MJH waw]) pictograph row. Uncial script. The Book of Kells, c. 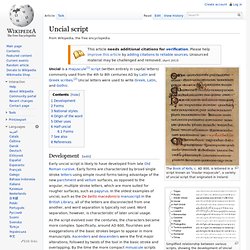 AD 800, is lettered in a script known as "insular majuscule", a variety of uncial script that originated in Ireland. Development[edit] Simplified relationship between various scripts, showing the development of Uncial from Roman and the Greek Uncial. Forms[edit] Manuscript. A manuscript is any document written by hand, as opposed to being printed or reproduced in some other way. Before the arrival of printing, all documents and books were manuscripts. In publishing and academic contexts, a manuscript is the text submitted to the publisher or printer in preparation for publication, regardless of the format. Until recently a typescript prepared on a typewriter was usual, but today a digital file with a printout, prepared in manuscript format is most common. Manuscripts are normally required by publishing companies before being published.

Cultural background[edit] Joachim of Fiore. Joachim of Flora, in a 15th-century woodcut. Joachim of Fiore, also known as Joachim of Flora and in Italian Gioacchino da Fiore (c. 1135 – 30 March 1202), was the founder of the monastic order of San Giovanni in Fiore. He was a mystic, a theologian, and an esotericist. His followers are called Joachimites. Biography[edit] Born in the small village of Celico near Cosenza, in Calabria, at the time part of the Kingdom of Sicily, Joachim was the son of Mauro the notary, who was well placed, and Gemma, his wife. About 1159 he went on pilgrimage to the Holy Land, an episode about which very little is known, save that he underwent a spiritual crisis and conversion in Jerusalem that turned him from the worldly life.