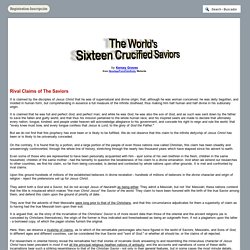 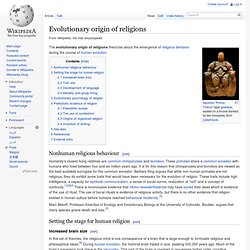 Nonhuman religious behaviour[edit] Humanity’s closest living relatives are common chimpanzees and bonobos. These primates share a common ancestor with humans who lived between four and six million years ago. It is for this reason that chimpanzees and bonobos are viewed as the best available surrogate for this common ancestor. Barbara King argues that while non-human primates are not religious, they do exhibit some traits that would have been necessary for the evolution of religion. 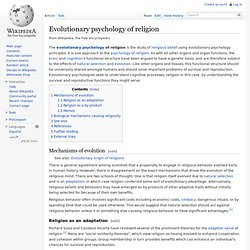 It is one approach to the psychology of religion. As with all other organs and organ functions, the brain and cognition's functional structure have been argued to have a genetic basis, and are therefore subject to the effects of natural selection and evolution. Like other organs and tissues, this functional structure should be universally shared amongst humans and should solve important problems of survival and reproduction.

Evolutionary psychologists seek to understand cognitive processes, religion in this case, by understanding the survival and reproductive functions they might serve. Mechanisms of evolution[edit] There is general agreement among scientists that a propensity to engage in religious behavior evolved early in human history. Religion as an adaptation[edit] Religion as a by-product[edit] Justin L. Memes[edit] Biological mechanisms causing religiosity[edit] The Top 10 Intelligent Designs (or Creation Myths) Anthony Duignan-Cabrera & Tom X. Chao | December 19, 2004 01:54am ET Credit: LiveScienceSeveral parents won a lawsuit against a Pennsylvania school district in 2005 that had added the controversial theory of "intelligent design" to its curriculum.

Unlike the theory of evolution which is taught at most schools as a fact-based science, "intelligent design" -- as argued by the plaintiffs -- was nothing more than a philosophy predicated on the Judeo-Christian belief that the logical sequences found in nature are not random happenings or surprising mutations, but deftly managed events created by a greater omniscient and omnipresent intelligence with a specific plan. In short, the work of God.

Popular Science Monthly/Volume 36/March 1890/New Chapters in the Warfare of Science: Comparative Mythology II. By ANDREW DICKSON WHITE, LL.D., L.H.D., THE first effect of the Protestant Reformation was to popularize the older Dead Sea legends, and to make the public mind still more receptive for the newer ones. 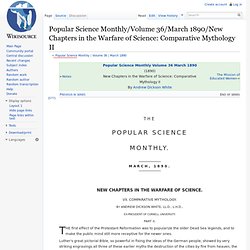 How religions change their mind. Once upon a time, animal sacrifice was an important part of Hindu life, Catholic priests weren't celibate and visual depictions of the Prophet Muhammad were part of Islamic art. 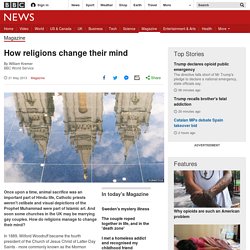 And soon some churches in the UK may be marrying gay couples. How do religions manage to change their mind? In 1889, Wilford Woodruff became the fourth president of the Church of Jesus Christ of Latter-Day Saints - more commonly known as the Mormon Church. As president, he was seen as a living prophet, someone who could receive wisdom and advice from Jesus Christ. And he was certainly in need of advice - his church was in crisis. For 40 years, Mormons had been at loggerheads with the US Congress over the issue of polygamy, which was encouraged among male believers. Woodruff and others lived a precarious life, moving around in an attempt to dodge marshals with arrest warrants for bigamy.

"It was a very difficult thing socially, personally and theologically," she says. Evolution Of Religion. Princeton Project: Evolution and Human Nature Posted 29 July 2011 by admin The Center of Theological Inquiry at Princeton will convene an interdisciplinary research team of theologians and scientists in residence during 2012-2013 to address questions of nature and nurture raised by the biological evolution of human beings. 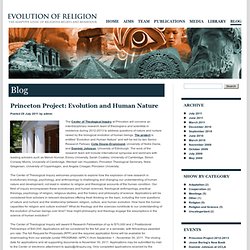 Social evolution: The ritual animal. Lifeispixels/Getty Images Members of large, stable groups such as religions, tribes and nations typically reinforce their commitment with routine rituals such as Buddhist prayers in Thailand. 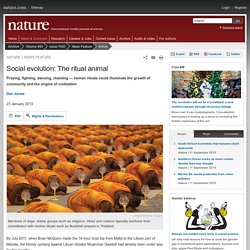 By July 2011, when Brian McQuinn made the 18-hour boat trip from Malta to the Libyan port of Misrata, the bloody uprising against Libyan dictator Muammar Gaddafi had already been under way for five months. “The whole city was under siege, with Gaddafi forces on all sides,” recalls Canadian-born McQuinn. He was no stranger to such situations, having spent the previous decade working for peace-building organizations in countries including Rwanda and Bosnia.