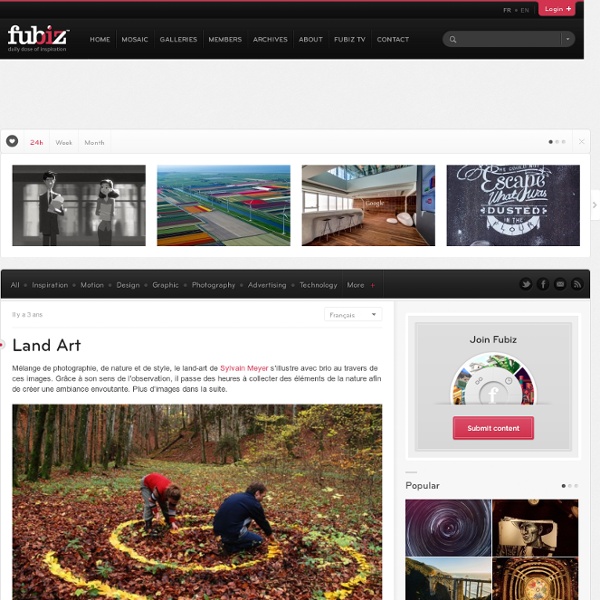 Beautiful land art by Andy Goldsworthy Landscapes Walter Mason is a German artist specializing in the creation of land art. By intervening in nature, he creates some beautiful compositions. Share The Typewriter Artworks of Keira Rathbone (9 pics 27-year-old Keira Rathbone, from London, first started experimenting with typewriter art, when she was in university. She bought an old typewriter, from a flee market, in the hope that she would soon use it to write something. By the middle of her first year at the university, she hadn’t come up with anything to put down on paper, so she decided to use it as a drawing tool. The first results were promising, and young Keira quickly realized she would be exploring this new art form much further. Source

The tide waits for no man but artist still finds time to make incredible sand frescos By Daily Mail Reporter Updated: 07:12 GMT, 6 July 2011 The tide waits for no man - which is why the creator of these stunning works of art etched onto the beach has got his work cut out. From a pod of dolphins playing in the ocean to a tender moment between a mother a child, Jamie Wardley's eye-catching art works have adorned beaches all over the north of England and Scotland. The former ice and sand sculptor, who decided to widen his canvass after a collaboration with another artist in 2007, was so successful with his first commission that he was asked to return the following year.

We often forget that WE ARE NATURE. We often forget that we are nature. Nature is not something separate from us. So when we say that we have lost our connection to nature, we’ve lost our connection to ourselves. External Stimuli : Andy Goldsworthy’s Digital Catalogue Themes : Art Nodes : Andy Goldsworthy, connection, elegance, environmental art, grace, nature, zen Robert Smithson's "Spiral Jetty" photographed by Arne Erisoty Discover the cosmos! Each day a different image or photograph of our fascinating universe is featured, along with a brief explanation written by a professional astronomer. 2010 December 4 Sunset at the Spiral Jetty Image Credit & Copyright: Arne Erisoty Explanation: In dwindling twilight at an August day's end, these broad dark bands appeared in the sky for a moment, seen from Robert Smithson's Spiral Jetty on the eastern shore of Utah's Great Salt Lake.

Amazingly Creative Drawing Vs Photography This wonderful work has done by a very talented Belgian painter, illustrator, portraitist, caricaturist and photographer Ben Heine. This creative artist was born in Abidjan, Ivory Coast. He Studied graphic arts and sculpture and I also have a degree in journalism. That's some party trick: Model-maker produces life-size replica of Tyrannosaurus Rex in 55 hours, using 1,400 balloons... and a LOT of hot air By Daily Mail Reporter Updated: 10:30 GMT, 1 July 2011 Try competing with this balloon artist and you would definitely be wasting your breath. Mark Verge has been perfecting the art form for more than 16 years and has created a 39ft life-size replica of a Tyrannosaurus Rex out of 1,400 balloons. It was just one of the sculptures made by the model-maker along with a triceratops, spinosaurus, stegasaurus and utahraptor for his show in Ontario, Canada. Masterpiece: Model-maker Mark Verge, from Ontario in Canada, made his balloon dinosaurs by scaling up from toy action figures

Stir-Fry: A Complete How-To - Womansday.com When we're in a rush, or down to end-of-the-week groceries, stir-fries can be a lifesaver. A few veggies here, some leftover meat there (enter instant rice) and voilà--a spontaneous, creative, great-tasting supper. And though boundaries remain relatively undefined when it comes to stir-fry, the WD kitchenistas do have some general guidelines and recommendations for your next frying fling. With our fool-proof ingredient and sauce options, it'll be a snap to mix and match your way to a delicious, steaming dinner tonight! Get Saucy! Choose from 4 sauces that give you a world of flavor: