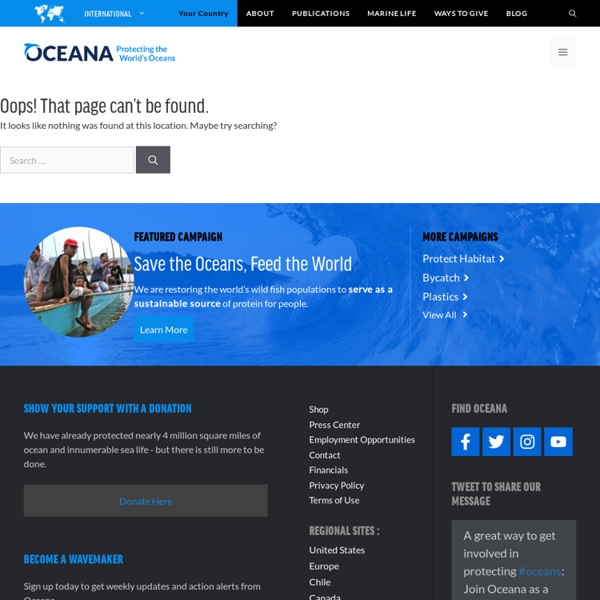 The Ocean Sea Shepherd Stop Waste Management by Government and Consumer Boycott Ocean An ocean (from Ancient Greek Ὠκεανός, transc. Okeanós, the sea of classical antiquity[1]) is a body of saline water that composes much of a planet's hydrosphere.[2] On Earth, an ocean is one of the major conventional divisions of the World Ocean, which occupies two-thirds of the planet's surface. These are, in descending order by area, the Pacific, Atlantic, Indian, Southern, and Arctic Oceans.[3][4] The word sea is often used interchangeably with "ocean" in American English but, strictly speaking, a sea is a body of saline water (generally a division of the world ocean) partly or fully enclosed by land.[5] Earth's global ocean[edit] Global divisions[edit] Various ways to divide the World Ocean The major oceanic divisions are defined in part by the continents, various archipelagos, and other criteria. Physical properties[edit] The bluish color of water is a composite of several contributing agents. Zones with depth[edit] The major oceanic divisions Exploration[edit] Climate[edit] Biology[edit]

Overfishing 101: How Ocean Fish Populations are Managed in the U.S. – National Geographic News Watch In the second post of a special series to mark the 35th anniversary of the U.S. Magnuson-Stevens Fishery Conservation and Management Act, a law that is helping to rebuild America’s depleted ocean fish populations and ensure their long-term sustainability, Lee Crockett looks at some of the basics of why all Americans should care about how our fish are managed. By Lee Crockett Fish are an essential component of life in the world’s oceans, with the state of their populations serving as a bellwether of the health of ocean life overall. Pollution, habitat destruction and overfishing (removing fish from the ocean faster than they can reproduce) have impoverished our oceans. All too often the discussion around the issue of overfishing has been limited to a small group of stakeholders such as fishermen, conservationists and scientists. Understanding Overfishing Overfishing is a problem that affects the entire marine environment, extending far beyond just the species being caught. Footnotes:

Baku Ceyhan Campaign Ocean Facts Interesting Ocean Facts Area: about 140 million square miles (362 million sq km), or nearly 71% of the Earth's surface. Average Depth: 12,200 feet (3,720 m). Deepest point: 36,198 feet (11,033 m) in the Mariana Trench in the western Pacific. Mountains: The ocean ridges form a great mountain range, almost 40,000 miles (64,000 km) long, that weaves its way through all the major oceans. Highest Mountain: Mauna Kea, Hawaii, rises 33,474 feet (10,203 m) from its base on the ocean floor; only 13,680 feet (4,170 m) are above sea level. 48 more facts about our oceans... Coastlines The total length of the world's coastlines is about 315,000 miles, enough to circle the Equator 12 times. As coastal zones become more and more crowded, the quality of coastal water will suffer, the wildlife will be displaced, and the shorelines will erode. 60% of the Pacific and 35% of the Atlantic Coast shoreline are eroding at a rate of a meter every year. Fisheries Rising Sea Level Volcanic Activity Density Water temperature

Oceans Food, work, fun, adventure, sport and life – not many things can give us all those things in one. Every day the oceans give us the air we need to breathe; the weather to grow crops; water to support the smallest to the largest animals on earth and 80% of all species; vast ice flows to help regulate our climate; millions of jobs and a life-time of pleasure. Send us your favourite ocean image and it could be featured here! You and I are alive right now because of the oceans. They are home to the largest animal our planet has ever known – the now-endangered blue whale - but there are still huge areas of ocean that humans have never seen. Earth's longest mountain range is not on land but under the sea - the Mid-Oceanic ridge system, which winds around the globe from the Arctic Ocean to the Atlantic. More people have stood on the moon than dived the deepest ocean trench and less than 5% of all the oceans have been explored. We can do it. The oceans support billions of us.

World Bank Bonds Boycott Teamsters Join Boycott, Become 7th International Union to Endorse Campaign OCTOBER 8 -- The International Brotherhood of Teamsters signed onto the World Bank Bonds Boycott on October 3, at a meeting of its International Executive Board. The International Brotherhood of Teamsters, with 1.4 million members, is one of the largest labor unions in the world. The Teamsters join six other international unions that have adopted the boycott, including the American Postal Workers Union (APWU), the Service Employees International Union (SEIU), the American Federation of Government Employees (AFGE), the International Longshore and Warehouse Union (ILWU), the Communication Workers of America, and the United Electrical, Radio and Machine Workers (UE). In addition to these international unions, the Wisconsin State AFL-CIO, 7 central labor councils, and several UAW, AFSCME and Steelworker locals have adopted the boycott. Come to Washington Sept. 25-29, Protest the IMF & World Bank!

National Oceanic and Atmospheric Administration Global carbon dioxide concentrations surpass 400 ppm Greenhouse gas rise is 'significant milestone' Earth: our water world Rich biodiversity Life began in the oceans, and continues to thrive in its diverse habitats. With as many as 100 million species - from the largest animal that has ever lived on Earth, the blue whale, to the tiniest bacteria - marine biodiversity far outweighs that on land. And new species are being discovered all the time. Vital role for life on land... The oceans also have a huge influence on us landlubbers. ...and shapers of human history The oceans have also shaped human history, culture, and lives - and continue to do so.

Moles - Your Skin Mole Removal Experts Sea Anemones As of July 1, 2013 ThinkQuest has been discontinued. We would like to thank everyone for being a part of the ThinkQuest global community: Students - For your limitless creativity and innovation, which inspires us all. Teachers - For your passion in guiding students on their quest. Partners - For your unwavering support and evangelism. Parents - For supporting the use of technology not only as an instrument of learning, but as a means of creating knowledge. We encourage everyone to continue to “Think, Create and Collaborate,” unleashing the power of technology to teach, share, and inspire. Best wishes, The Oracle Education Foundation