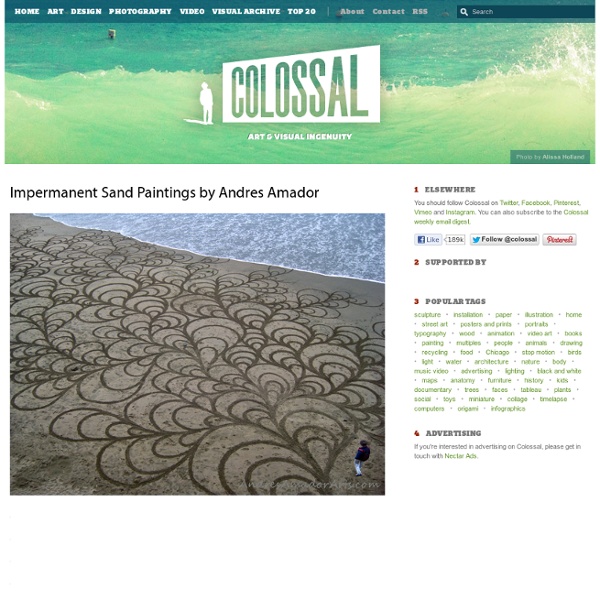 San Francisco-area landscape artist Andreas Amador etches massive sand drawings onto beaches during full moons when his canvas reaches its largest potential. Using only a rake and often several helpers the geometric and organic shapes are slowly carved into the sand, often interacting with the physical topography like the stones in a zen garden. The works exist for only a few moments, just long enough to snap a few photographs before being completely engulfed by the encroaching tide. Amador has also collaborated on a number of killer marriage proposals, the question popped as part of his elaborate drawings viewable from an elevated distance. You can see much more on his website, and he also sells prints. If you liked this, also see the works of Sonja Hinrichsen and Jim Denevan.

Sylvain Meyer New to me, these wonderful land art installations by Swiss artist Sylvain Meyer who modifies wooded areas and landscapes to create various impermanent patterns, sculptures, and textures. Everything seen here was constructed without the use of Photoshop, even the mossy spider. Whoa! ENDS OF THE EARTH: LAND ART TO 1974 Developed by MOCA for Ends of the Earth: Land Art to 1974, this interactive feature maps key artworks included in the exhibition, pinpointing their original locations to demonstrate the global nature of Land art and its relationship to real places and times. Click on an artist’s name to begin. Ends of the Earth: Land Art to 1974 is the first large-scale, historical-thematic exhibition to deal broadly with Land art, capturing the simultaneous impulse emergent in the 1960s to use the earth as an artistic medium and to locate works in remote sites far from familiar art contexts. Organized by MOCA Senior Curator Philipp Kaiser and co-curator Miwon Kwon, Professor of Art History at UCLA, the exhibition highlights the early years of untested artistic experimentations and concludes in the mid-1970s before Land art becomes a fully institutionalized category. Major support is provided by Barbara Kruger and L&M Arts, LA.

Paul Klein (art activist) Paul Klein (born 1946) is an American art dealer. He was chosen 2006 Man of the Year by the Chicago Society of Artists.[1] Klein works for the Briddge Group providing financial and legacy planning for collectors. He was the first executive director of the Chicago ART Project.[2] From 2004-2008 he was the art curator for the 2,500,000-square-foot (230,000 m2) expansion of McCormick Place,[3] the editor of ArtLetter,[1] and wrote for "Chicago Life" which was distributed regionally in the New York Times.[citation needed] The Museum of Contemporary Art’s popular 12 x 12 program of presenting one Chicago artist a month is attributable to him.

Clary Illian A special exhibition preview reception for this exhibition has been scheduled for Friday, August 24 from 5:00 p.m. to 7:00 p.m. at the Cedar Rapids Museum of Art. This preview is free and open to the public! Ely, Iowa, resident Clary Illian first started making ceramics in the early 1960s, shortly after graduating from the University of Iowa's highly-respected ceramics department and a two year residency with world renowned British ceramicist Bernard Leach. Since then, Illian has created a body of work which not only celebrates the utilitarian qualities she pursues, but also demonstrates her ability to infuse each of her pieces with their own unique character and personality.

Andy Goldsworthy Artist/Naturalist Pages Andy Goldsworthy 1956 - Andy Goldsworthy is a brilliant British artist who collaborates with nature to make his creations. Besides England and Scotland, his work has been created at the North Pole, in Japan, the Australian Outback, in the U.S. and many others Goldsworthy regards his creations as transient, or ephemeral. CDOT: Christo's Over the River will get serious traffic review Posted: 06/21/2012 12:57:05 PM MDT This artist's drawing provided by Christo shows an image of a proposed art project by artists Christo and Jeanne-Claude that would suspend 5.9 miles of silvery, translucent fabric above parts of the Arkansas River in southern Colorado. (Provided by Christo | via AP) Christo's Over The River project, which calls for draping huge fabric panels from cables over parts of the Arkansas River, will be carefully scrutinized for its potential impact on traffic on U.S. 50 — just like any other huge project, Colorado Department of Transportation officials said today.