Looking back at the Oka Crisis and ahead to the future. When I was younger, I viewed the resistance from the Kanien’kehá:ka (Mohawk) communities of Kanehsatake and Kahnawake during the summer of 1990 through a romanticized lens that elicited pride to be a part of a people that stood up for what they believe in. 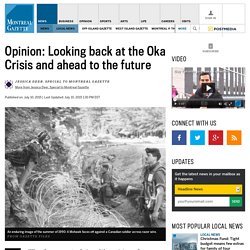 Saturday marks the 25th anniversary of the start of the 78-day standoff known as the Oka Crisis, between the people of Kanehsatake, the Sûreté du Québec and, later, the Canadian Army over the town of Oka’s plans to expand a golf course on contested land. In solidarity, my own community — Kahnawake — blocked access to the Mercier Bridge and its highways. I was just a baby 25 summers ago. Growing up without a clear explanation of what really went on, I had to piece together references adults made regarding “the blockade” and “1990.” A desire to know more led me to write my first research paper on the issue when I was in Grade 9, with subsequent papers in just about every CEGEP and university course I took. Education is key. Treaty Walks: Treaty Essential Learnings. Native Studies Research/Inquiry Project. 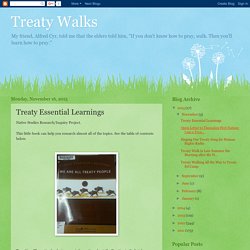 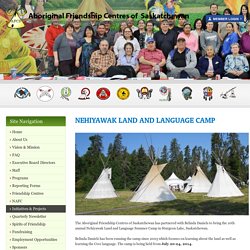 Belinda Daniels has been running the camp since 2005 which focuses on learning about the land as well as learning the Cree language. The camp is being held from July 20-24, 2014. The camp registration is currently full, however please contact us if you want to be placed on a waiting list in case someone cannot make it last minute. Registration Form & Waiver Poster for Camp Tentative Agenda.

Assimilation is not the answer to the Aboriginal ‘problem’ “Canada is a test case for a grand notion — the notion that dissimilar peoples can share lands, resources, power and dreams while respecting and sustaining their differences. 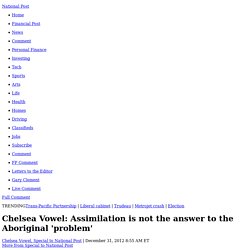 The story of Canada is the story of many such peoples, trying and failing and trying again, to live together in peace and harmony. But there cannot be peace or harmony unless there is justice. It was to help restore justice to the relationship between Aboriginal and non-Aboriginal people in Canada, and to propose practical solutions to stubborn problems, that the Royal Commission on Aboriginal Peoples (RCAP) was established.” — page ix, A Word From Commissioners The quote above comes from a publication that is 150 pages in length.

Every Canadian should read it. The RCAP was established in 1991 and engaged in 178 days of public hearings, visiting 96 communities, commissioning research and consulting with experts. Uttp pages9 18. Blanket Exercise Workshop - KAIROS Canada. Fifteen years ago, the Aboriginal Rights Coalition worked with Indigenous elders and teachers to develop an interactive way of learning the history most Canadians are never taught. 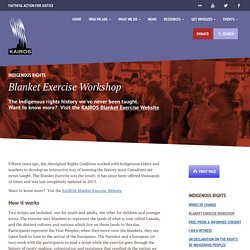 The Blanket Exercise was the result; it has since been offered thousands of times and was last completely updated in 2013. Want to know more? Vist the KAIROS Blanket Exercise Website How it works Two scripts are included: one for youth and adults, the other for children and younger teens. Where and how The Blanket Exercise itself takes about half an hour to 40 minutes, and should always be followed by a talking circle of at least half an hour.

If you need help in knowing where to start, please contact us at blanketexercise@kairoscanada.org. Want to know more? Declaration on the Rights of Indigenous Peoples. The Declaration on the Rights of Indigenous Peoples was adopted by the General Assembly on Thursday, 13 September 2007, by a majority of 144 states in favour, 4 votes against (Australia, Canada, New Zealand and the United States) and 11 abstentions (Azerbaijan, Bangladesh, Bhutan, Burundi, Colombia, Georgia, Kenya, Nigeria, Russian Federation, Samoa and Ukraine). 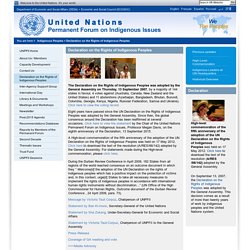 Click here to view the voting record. Eight years have passed since the UN Declaration on the Rights of Indigenous Peoples was adopted by the General Assembly. Since then, the global consensus around the Declaration has been reaffirmed at several occasions. Canada's Indian policy is a process of depletion.