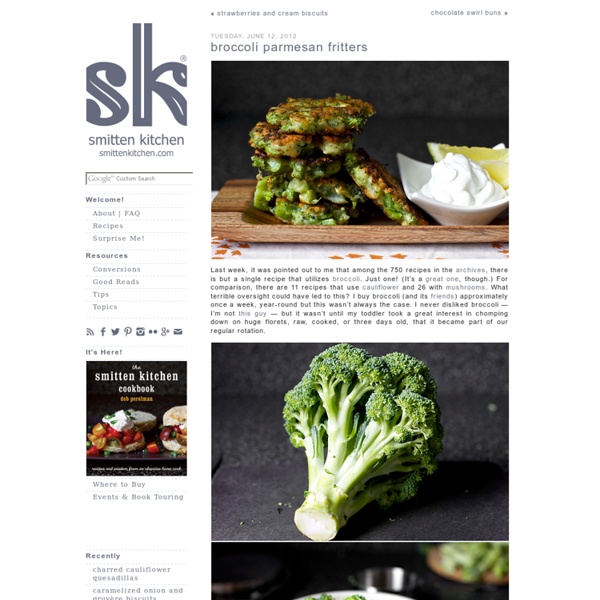 Last week, it was pointed out to me that among the 750 recipes in the archives, there is but a single recipe that utilizes broccoli. Just one! (It’s a great one, though.) For comparison, there are 11 recipes that use cauliflower and 26 with mushrooms. What terrible oversight could have led to this? I buy broccoli (and its friends) approximately once a week, year-round but this wasn’t always the case. Please understand: this is not one of those stories about how preciously advanced my toddler’s tastes are, how early he took an interest in foie gras and how he turns his nose up at white flour pastas, preferring farro. I have a theory that you can tuck almost any finely chopped or shredded vegetable — be it potatoes, zucchini, or an Indian-spiced mix — into a savory pancake, fry it in small mounds until crisp on both sides, serve it with a dollop of a sour cream or yogurt sauce and they will be inhaled. So, you know where this is going. And with that, I had them for lunch instead.

Recipe for Julia Child's Eggplant Pizzas (Tranches d'aubergine á l'italienne) I love this recipe for Julia Child's Eggplant Pizzas made on a base of roasted eggplant. The eggplant pizzas are low-carb, Keto, low-glycemic, gluten-free, meatless, and South Beach Diet friendly; use the Recipes-by-Diet-Type Index to find more recipes like this one. If you're interested in food, you must have heard that August 15 would have been Julia Child's 100th birthday. I was honored to be one of the bloggers asked to share thoughts of Julia in a tribute written for PBS Food, and my friend Lydia completely captured why food bloggers want to honor Julia in her post on Six Lessons I Learned About Food Blogging from Julia Child. Julia was known for her appreciation of bread, butter, and wine, so when you're writing a blog focused on carb-conscious cooking, finding a suitable Julia Child recipe that will appeal to your readers can be a challenge. I must confess that even though this was Julia Child, I did make a few minor changes in the recipe.

The Astounding Design Of Eixample, Barcelona Constructed in the early 20th century, Eixample is a district of the Spanish city of Barcelona known for the urban planning that divided the district into octagonal blocks. Influenced by a range of schools of architecture, Eixample Barcelona was designed in a grid pattern with long streets, wide avenues, and rounded street corners. Despite being in the center of a thriving European metropolis, the district provides improved living conditions for inhabitants including extensive sun light, improved ventilation, and more open green space for public use. And of course, the result from the grid-like structure is astounding from above: Baking Products 100% Unbleached Paper Products for Baking IF YOU CARE® baking products consist of: Parchment Paper Baking Paper in sheets Baking Cups Golden Silicone 100% Unbleached Parchment Paper and Baking Paper sheets

Easy Calabacitas or Squash with Onions, Chiles, and Cheese I've had a lot of comments from people who like the Easy South Beach Recipes I've been posting which have only five ingredients or less. I'm going to sneak this one in, but you'll need to use a bit of salt and pepper to go with the five main ingredients. Calabacitas is a traditional recipe of the American southwest, and this easy version is so good, I had it for lunch two days last week.

Finds: Awesome Cake Designs Posted by C on Wednesday, June 13, 2012 · [via thisisnthappiness.com] I’m not really that big fan of cakes. The other day, I found these really amusing cake designs that make me want to taste one! Would you want to try that hot chocolate cupcake up there? Or this chocolate flower cake below? Pizza Braid A pizza braid is very kid-friendly, easy on the wallet and extremely simple to make. My aunt and cousin first introduced me to them and I’ve been hooked ever since. The possibilities are endless of the varieties you could make (check out the Apple Dessert Braid!), but the recipe below is for a very basic hamburger and pepperoni braid. You could make your own dough, but I prefer the shortcut of using Rhodes rise and bake dough. This is one of my favorite shortcuts to make a nice loaf of bread or use in recipes like this one.

5 Free iPhone Apps You Need for Family Travel Photo: Britt Reints With iPad apps to keep kids entertained and GPS systems to keep Mom and Dad from getting lost, today's family vacation has gone high-tech. We're not complaining. Converting Recipes for the Thermomix As you may have seen on Masterchef and Iron Chef Australia lately, the Thermomix is invaluable for cutting down time of food preparation. It's like having an extra pair of hands in the kitchen. But some people worry that using a Thermomix takes away from traditional ways of cooking, and they'd rather do everything by hand. Well, as a busy mum, I don't have time to make everything from scratch, the old fashioned way - although I do enjoy it! There's nothing quite so satisfying as knowing you did it all yourself, the way it's been done for hundreds of years. But let's be honest - if you had to do everything by hand (no Thermomix, or mix-master, or blender, or food processor, or grain grinder...) how much 'fun' cooking would you do?

Ratatouille Wanna-Be I recently spotted what I considered to be the ultimate ratatouille blog post on the blog of talented cook and photographer Bea of La Tartine Gourmande. It inspired me to try my hand at making ratatouille, even though, like Bea, I never liked it when my mother made it either. When it came time to survey my garden for ingredients, I found I couldn't even consider buying eggplant, since I had such a surplus of squash that needed to be used. Besides, eggplant never graced the table during my childhood, so it doesn't seem to me to be an essential component of the dish. I didn't have shallots so I used red onion. When it came time for fresh herbs, Bea had used fresh tarragon, something I don't have in my garden.