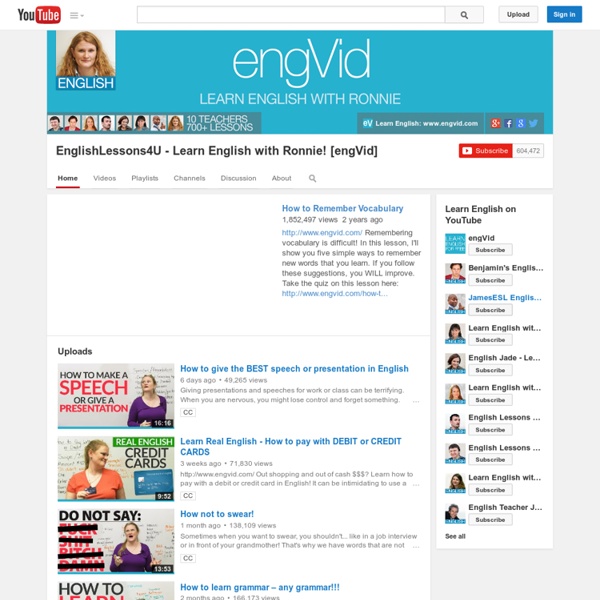 Busy Beavers Busy Beavers have Created the Best Kids Videos on You Tube Since 2007.Parents, Teachers and Children have Sang Along Over 150 Million Times! Every Monday we Upload a Fresh, Catchy, Song Video or Engaging Lesson. Subscribe and You'll be Notified when New Videos Go Live! TeachingEnglish This lesson plan for teachers of teenagers at level B1 explores the theme of festivals. Students will read about different festivals and invent an exciting new one. Introduction This is an integrated skills lesson, in which students will discuss festivals in their countries/ their favourite festivals. They will then work in groups of 3-4 to read and complete comprehension questions on different texts describing the reasons behind and the customs practised in four different festivals from different parts of the world. They will then share the information about their festival and discuss which one they would like to attend and why.

Learn Hebrew with HebrewPod101.com Learn Hebrew with HebrewPod101.com! Welcome to HebrewPod101.com's Hebrew Alphabet Made Easy series. In this video series of twenty lessons, you will learn the Hebrew alphabet, known as Alef-Beit. Mother Goose Club Watch "Elves in Santa's Workshop!" ABC Song and More! Three Little Kittens and More! Wheels on the Bus and More Nursery Rhymes! Hop on board for 100 minutes of your favorite Mother Goose Club nursery rhyme hits when you watch “Wheels on the Bus” with us! Learn English with Let's Talk - Free English Lessons How to build your spoken English confidence? - 04 useful tips. Speaking a foreign language can be really intimidating. You know that you're probably making mistakes. Khan Academy Overview of cultural contributions of Classical Greece. Golden Age of Athens. Age of Pericles. Watch the next lesson:

25 maps that explain the English language by Libby Nelson on March 3, 2015 English is the language of Shakespeare and the language of Chaucer. It's spoken in dozens of countries around the world, from the United States to a tiny island named Tristan da Cunha. It reflects the influences of centuries of international exchange, including conquest and colonization, from the Vikings through the 21st century. Here are 25 maps and charts that explain how English got started and evolved into the differently accented languages spoken today. The origins of English

TEDx Talks Musician Scott Mescudi, aka Kid Cudi, returns to his high school to talk about growing up and his career path in the music industry. Born Scott Ramon Seguro Mescudi in Cleveland, Kid Cudi began rapping while attending Shaker Heights High School and later Solon High School. In 2004, Kid Cudi moved to Brooklyn, NY to pursue his rap career. He released his first mixtape, “A Kid Named Cudi,” in 2008. The mixtape earned Kanye West’s attention, leading him to sign Cudi to his GOOD Music imprint. TES (New Teachers) Resources These resources can provide some ideas of how to teach examination skills and how to motivate pupils to reach their full potential. This powerpoint can help motivate and encourage pupils to go for the A and A* grade. Classroom management strategies to get silence from noisy, challenging groups of students. Another fantastic report from to help you manage your classroom and get attention from noisy, rowdy groups of tough students. Take control of your noisy students with these...

SmarterEveryDay Twitter SmarterEveryDay Loading... Working... The Backwards Brain Bicycle - Smarter Every Day 133 14,875,581 views 1 year ago Get your own here ⇒ Shirt: Support Link: ⇒ ⇐ ↓↓↓↓↓↓↓READ MORE: ↓↓↓↓↓↓↓Here's the link from the Amsterdam meetup! (I usually make a localized facebook post before I visit a city to see if anyone wants to high five.) threads on Reddit: (Bicycling)My Instagram account: Support Link: Motion Sound Design by "A Shell In The Pit"The awesome music by "A Shell In The Pit" is called:"Bottles" which can be downloaded here.