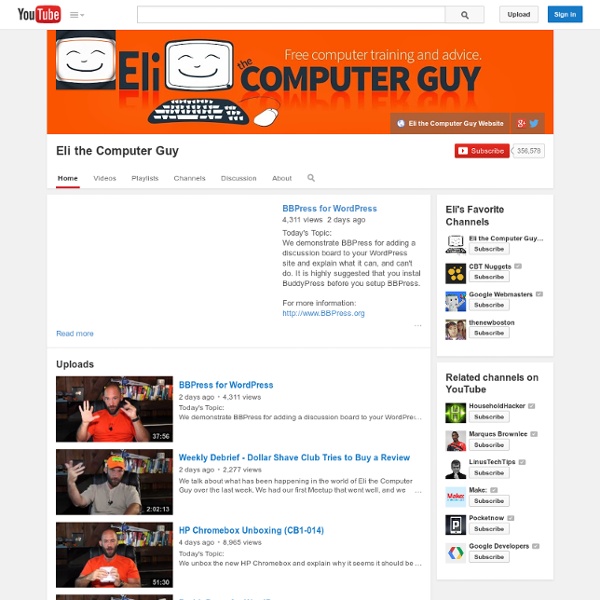 pjmachado : #convergeconf Will Yu shar... See how Skype is changing health care Sign up for the Follow us on: The video chatting service helps psychologists, other health care providers and veterinarians serve patients as never before. By Ann Tracy Mueller | Posted: July 16, 2012 Think Skype is just a cool way for Baby Boomers to coo at their grandkids through cyberspace? Its use is growing like crazy, too, with 40 million users online at April 2012. To learn more, see this infographic from OnlineEducation.net, “The Skype’s the Limit.” (View larger image) Popularity: This record has been viewed 8569 times. HeathCamp Thoughts by @ekivemark Health Systems Ignore Patients at Their Own Peril “The most important member of the care team is the patient.” That has been a statement one has heard in healthcare for decades, yet it has never been more important. Why? In my experience reviewing or implementing over 100 health IT systems, the core purpose of legacy healthIT systems is crystal clear — their job is to get as big a bill out as quickly as possible. While there is great ambiguity about the future of healthcare, there is one certainty: healthcare will be paid based on some blend of value/quality/outcome and a shifting away from the “do more, bill more” reimbursement model. Who is in control of decisions driving outcomes. The graphic above speaks to the importance of the individual (or family) in the care process. The highest performing health systems perform very well when there is the medical equivalent of a big fire. Healthcare leaders increasingly understand the importance of individuals and behavioral science.

Empowering Health Care Engagement - A.E.I.O.U a selection of images from my #HIMSS12 session Last week I was at HIMSS 2012 in Las Vegas to present at the Leading from the future track. My topic was "Empowering Health Care Engagement." I have already posted a draft version of my slides to slideshare. During my presentation, and following it on Twitter a couple of things caught people's attention so I thought I would pick out some of those key slides and present them here: One of my consistent themes has been "Health May be Private, while exercise is often solitary but effective wellness should be both social and fun. In my presentation I posed the question: Is there a recipe for Engagement? I put forward the proposition that there is and use a simple mnemonic as a guide: Actionable Easy Immediate Open Unobtrusive Citizen empowerment in their own health is an important step where we use sensors to gather data and have that utilized by our health support teams. This is where we must act to "Break the glass wall in Health Care" Empowered engagement demands trust.

Ignagni to AHIP attendees: Change is coming, without or with ACA - HealthLeaders-InterStudy Contributor: Jane DuBoseTopic:Supreme Court ruling, healthcare costs Karen Ignagni, president and CEO of America’s Health Insurance Plans arrived about 10 minutes late to the opening session of her organization’s annual meeting in Salt Lake City. Even with that short delay, there was already mumbling that maybe her tardiness was related to a ruling by the Supreme Court on healthcare reform. The first words out of her mouth? “We don’t know.” And, of course, everyone knew exactly what she meant. But within five minutes, an aide slipped her a note – there wouldn’t be a court ruling today on the Affordable Care Act. Ignagni and every speaker afterwards spent part of their time stressing that the ruling – while a huge deal and quite possibly a major disruption to the market – is only one part of the disruption in the healthcare landscape. Jay Gellert, CEO and president of Health Net, says we’ve maybe gone back to the future a couple of times.

Payers Take Another Stab at Engagement with Consumer-based Tools It is now nail-biting time, as we here at Chilmark Research brace ourselves for the upcoming Supreme Court decision on the legitimacy of the Affordable Care Act. We as a nation are indeed living in very interesting times and I am again reminded why I find healthcare markets endlessly fascinating (and perplexing). (Editor’s note: This post was written by senior analyst Cora Sharma and highlights some of her latest research that looks at payer strategies for patient/member engagement.) Of interest is just how many of the ~30 million uninsured US citizens will land on insurers’ doorsteps in 2014. For my patient engagement research, I have spent the past several months speaking with executives at large payers about their consumer-focused strategies. Payer Initiatives in Consumer TechnologiesKaiser Permanente and Humana actually began experimenting in this area circa 2008, creating flash-based, online health games for children.

s Mobile Tech Issue: Tracking Disease One Text at a Time Accurate bookkeeping is on nobody’s list of heroic acts. But without it, some revolutions are impossible, including the overhaul of a nation’s health care infrastructure. And Uganda’s health care system needs quite an overhaul. There aren’t enough doctors, just 131 hospitals serve nearly 36 million people, and children are dying of treatable diseases, especially malaria, which accounts for up to 40% of medical visits and almost a quarter of deaths among kids under 5. The Ugandan Ministry of Health and various NGOs have tried to address the issue with smaller clinics and volunteer village health team workers, some of whom dispense drugs. Malaria can be held at bay with artemisinin-based combination therapies (ACTs). (MORE: TIME’s Mobility Poll) While Uganda may not have enough hospitals, it’s well served by cellular carriers. (MORE: Three Myths About Cell Phones) Of course, the texts are useless if they’re not accurate. (MORE: TIME’s Special Report on How Phones Are Changing the World)

HIT Policy Committee questions Stage 2 measures As members of the HIT Policy Committee debated the proposed Stage 2 meaningful use regulations on Wednesday, many expressed concerns that the rules would require eligible providers to collect data for too many measures. That burden poses problems from the start, said some committee members, noting that the cost of $10,000 per measure for physician practices to have their certified electronic health record systems updated makes the 120 proposed new measures unreasonable. [See also: CMS releases Stage 2 rules.] There was also concern that the measures are being collected, but won’t be used by the federal government for some time, if at all, to improve public health. National Coordinator for Health Information Technology and Committee Chair Farzad Mostashari, MD, agreed. Paul Tang, vice chair of the committee said Wednesday’s discussion of the proposal was only a start. The proposed meaningful use Stage 2 rule was released Feb. 23, with the comment period closing in May.

HIMSS’12 Take-away: Follow the Money Last week we attended the big healthcare IT confab HIMSS in that grand city of sin, Las Vegas. While many spoke of how HIMSS hit an all time record of over 37K attendees (an impressive number), HIMSS is still dwarfed by what is arguably the largest US-based healthcare trade show, RSNA, which had a 2011 attendance of just over 57K, (roughly 54% greater than HIMSS). Why such a radical difference you ask? As one colleague put it: RSNA is where providers come to make money and HIMSS is where they go to lose money. While that may be the case today, it is unlikely to be so in the future. Nearly every vendor we met with at HIMSS had a story to tell about how they had the solution the market was seeking for ACO enablement. This raises what our research team found to be the most significant learning from HIMSS’12. Our Thesis: The MU requirements have become little more than a “spec-sheet” for vendors, consultants and IT shops and departments. And speaking of risks…

Amit Gupta and the social media search for a cure 6 December 2011Last updated at 02:47 By Kate Dailey and Matt Danzico BBC News Magazine The BBC visits the Punjabi Professional Happy Hour in New York City to find out how potential donors are registering to help Mr Gupta's campaign Does social media amplify our sense of responsibility to one another? Amit Gupta, a cancer patient and tech entrepreneur, tests the strength of the web. When Amit Gupta was diagnosed with acute leukaemia, the 32-year old technology entrepreneur did what most people in that position do: turned to his friends and family to find a bone marrow donation. But Mr Gupta, who founded the photo site Photojojo, has a few more friends to draw from than the average cancer patient: 17,700 on Twitter, 13,000 on Facebook (plus 422 subscribers) plus a strong web presence on Tumblr, Flickr and other social media platforms. He would need all the help he could get. Reluctance to register So Mr Gupta and his friends decided to use their fluency with social media to compensate.

Health IT Saves a Life in Memphis A new study has found that a medical-information exchange system that is considered a model for health-care reform efforts saved significant amounts of money and led to better care for patients—including a woman who probably would have died without the system. The woman was bleeding from her uterus when she came to the emergency room of Saint Francis Hospital in Memphis, Tennessee, in 2009. If her medical records had been unavailable, doctors probably would have ordered an ultrasound, incurring some delay in treatment. But because of the city’s digital information-sharing program—a rarity among U.S. hospitals with different owners—the doctors learned that an ultrasound done days earlier at another facility had detected that the woman had an ectopic pregnancy, in which the embryo becomes implanted outside the uterus. This knowledge prompted the Saint Francis doctors to rush the woman into surgery.

mp Oregon | Empowering Health Care Engagement in Oregon and the Northwest The latest mashup: Health care social media and HIPAA compliance NEWTON, Mass. -- Healthblawg author David Harlow is so convinced of the power and ubiquity of health care social When you register you’ll also receive targeted emails from my team of award-winning editorial writers. Our goal is to bring you the best healthcare IT information from top industry sources. media that he feels it's only a matter of time before using it will be required as part of accountable care organizations' patient engagement rules -- if it's not already. The tricky part for health care providers will be combining technology and written policies in such a way as to enable HIPAA compliance while opening up contact between patients and the caregivers who treat them, the Harlow Group principal said in a presentation at the New England Regional Annual Conference for the Health Care Compliance Association . "I'm here to tell you: You can use social media and remain on the right side of the law -- the question is, how?" Don't just have the privacy officer pen the policy.