NO TECH MAGAZINE – We believe in progress and technology 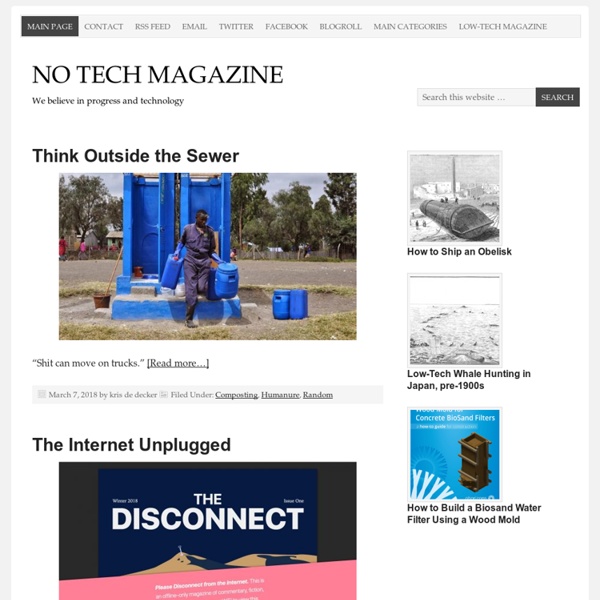 Low-tech solutions - LOW-TECH MAGAZINE How to make everything ourselves: open modular hardware Reverting to traditional handicrafts is one way to sabotage the throwaway society. In this article, we discuss another possibility: the design of modular consumer products, whose parts and components could be re-used for the design of other products. Initiatives like OpenStructures, Grid Beam, and Contraptor combine the modularity of systems like LEGO, Meccano and Erector with the collaborative power of digital success stories like Wikipedia, Linux or WordPress. An economy based on the concept of re-use would not only bring important advantages in terms of sustainability, but would also save consumers money, speed up innovation, and take manufacturing out of the hands of multinationals. Slow Electricity: the Return of DC Power? In today's solar photovoltaic systems, direct current power coming from solar panels is converted to alternating current power, making it compatible with a building's electrical distribution.

Homemade Organic Toothpaste An Old Swiss Teeth Whitening Recipe… | Natural Snippets A couple of years ago we were lucky enough to escape ‘drill and fill’ and to find a biological/holistic dentist and (really important for me) one who didn’t use needles. Our dentist does not fill teeth and so I then began to study how to optimise our diet for tooth remineralisation. This done I then began to research anything that could hinder the process and found the mention of glycerine. It is used to give the toothpaste a ‘glossy’ sheen but it also leaves a coating on the teeth, which in turn prevents remineralisation. I have read that it takes multiple rinsings with pure water to actually rid your teeth of this glycerine film. When I checked the contents of my purchased organic toothpaste, I was mortified to find glycerine on the list. Step 1: Recipe & Ingredients… The Recipe… Ingredients… Raw Sea Salt 1 teaspoonBicarbonate of Soda 2 teaspoonsPowdered Orange Peel 1 tablespoonDried Sage 2 teaspoonsLemon Essential oil 2 – 5 dropsPeppermint Essential oil 2 – 5 drops The Method… Storage…

The Museum Of Old Techniques For almost every electronic device or oil driven machine there used to be a low-tech alternative that was powered by human muscles, water or wind. The Museum of Old Techniques aims to collect and study these historical alternatives to modern day machinery. Why, you may ask? To quote the Museum: "Evolution doesn't necessarily mean progress, what we consider to be primitive solutions are often not primitive at all". A somewhat related publication is Edward H. Knight's book contains not only early electric equipment and steam driven machinery, but also human and animal powered machines.

Post Apocalyptic Survival Gear List This is a post apocalyptic survival gear list for you to determine your level of preparedness. Items that will give you and your family the best chance to survive the apocalypse. Most post apocalyptic survival gear lists are limited to what you can carry; to be truly prepared; to make sure my little boy and my wife have a father that can protect them come hell or high water, I have included much more than what will fit in a little backpack. I will be holding down the fort here until we completely run out of supplies and are forced to move on. The six things you should think about for your post apocalyptic gear list are: SecurityWater purificationFire startingFood acquisitionToolsShelter 72 hour bug out bag kits are a joke because you can survive for 72 hours without food or water; so what they really should be called is 72 hour comfort kits and they should have a carebear inside for you to hug. It is about time you start collecting all the gear you will really need to live off the grid.

Welcome to a world without work | Ryan Avent | Opinion A new age is dawning. Whether it is a wonderful one or a terrible one remains to be seen. Look around and the signs of dizzying technological progress are difficult to miss. Driverless cars and drones, not long ago the stuff of science fiction, are now oddities that can occasionally be spotted in the wild and which will soon be a commonplace in cities around the world. With a few flicks of a finger, we can use our phones to order up a meal, or a car, or a translation for a waiter’s query in a foreign country. Just a few years ago, one could dismiss the digital age as consisting of little more than social networks and cat videos; no longer. What is important, but far from obvious, is that these two trends – this careening toward a new digital age on the one hand and this descent into political darkness on the other – are closely related. History suggests that periods of great economic change are also times of political and social difficulty. Then there is the sobering data on employment.

Is Your Chocolate Real? Cacao vs Cocoa: What You Need To Know... Is Your Chocolate Real? Cacao vs Cocoa: What You Need To Know… A growing number of studies show that chocolate, especially antioxidant-rich dark chocolate, has health benefits that put it squarely on the latest list of superfoods. This sounds fantastic because chocolate is so delicious. The good news is you can make your own chocolate with only 3 super healthy ingredients: cacao, coconut oil and honey! Remember my article 5 Ingredient Swaps For Healthier Eating? So, What Is The Difference Between Cocoa And Cacao? Let’s take for example a popular brand: Hershey’s chocolates. Studies show that the darker the chocolate, the better. that contains at least 65 percent cacao, recommends Joy DuBost, PhD, RD, an American Dietetic Association spokeswoman. Did you know also that dairy inhibits the absorption of antioxidants from cacao? Cacao contains far more antioxidants per 100g than acai, goji berries and blueberries. 7 Health Benefits Of Raw Cacao at Whole Foods but it is also available online.

Your Favorite Books on Preparedness, Self-Sufficiency, and Practical Skills [via Survivalblog] In descending order of frequency, the 78 readers that responded to my latest survey recommended the following non-fiction books on preparedness, self-sufficiency, and practical skills: The Encyclopedia of Country Living by Carla Emery (Far and away the most often-mentioned book. This book is an absolute “must” for every well-prepared family!) The Foxfire Book series (in 11 volumes, but IMHO, the first five are the best) Holy Bible Where There Is No Dentist by Murray Dickson “Rawles on Retreats and Relocation” Making the Best of Basics: Family Preparedness Handbook by James Talmage Stevens The “Rawles Gets You Ready” preparedness course Crisis Preparedness Handbook: A Comprehensive Guide to Home Storage and Physical Survival by Jack A. Gardening When It Counts: Growing Food in Hard Times by Steve Solomon Tappan on Survival by Mel Tappan Boston’s Gun Bible by Boston T. Seed to Seed: Seed Saving and Growing Techniques for Vegetable Gardeners by Suzanne Ashworth Survival Guns by Vicki Tate

Cassandra's Legacy: Some reflections on the Twilight of the Oil Age (part III) The Tooth Fairy Syndrome that I discussed in Part 2 is, in my view, the fundamental reason why those holding onto BAU will grab every piece of information that can possibly, superficially, back up their ideology and twist it to suit their viewa, generating much confusion in the process. It is also probably fair to say that the advocates of various versions of “energy transition” are not immune to this kind of syndrome when they remain oblivious to the issues explored in Parts 1and 2. Is it possible to go beyond such confusion? The need to move away from ideology The impact of the Tooth Fairy Syndrome is all the more felt in the main media and among politicians – with the end result that so many lay people (and many experts) end up highly confused about what to think and do about energy matters. “Apocalypse now” At least since the early 1970s and the Meadows' work, we have known that the globalised industrial world (GIW) is on a self-destructive path, aka BAU (Business as usual). Figure 2