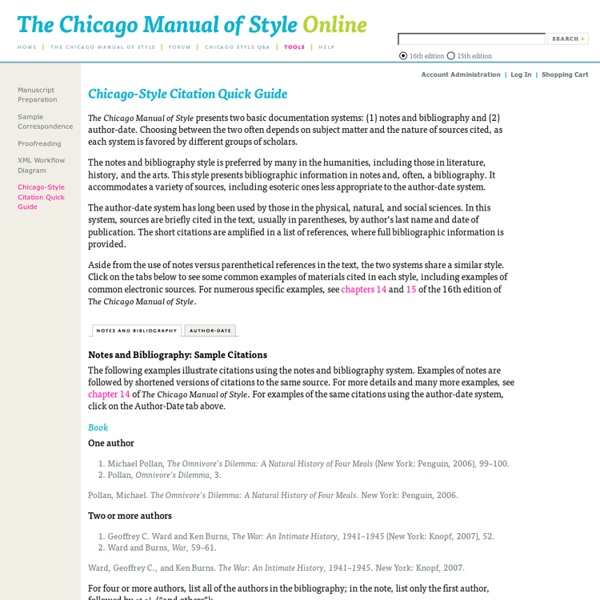 The Chicago Manual of Style presents two basic documentation systems: (1) notes and bibliography and (2) author-date. Choosing between the two often depends on subject matter and the nature of sources cited, as each system is favored by different groups of scholars. The notes and bibliography style is preferred by many in the humanities, including those in literature, history, and the arts. This style presents bibliographic information in notes and, often, a bibliography. It accommodates a variety of sources, including esoteric ones less appropriate to the author-date system. The author-date system has long been used by those in the physical, natural, and social sciences. Aside from the use of notes versus parenthetical references in the text, the two systems share a similar style. Notes and Bibliography: Sample Citations The following examples illustrate citations using the notes and bibliography system. Book One author 1. 2. Pollan, Michael. Two or more authors 1. 2. 1. 2. 1. 2. 1. 2. 1.

IPA Typewriter If the title above does not display correctly, you should click on "About" to find out how to get a unicode font. Introduction You can use this tool to type phonemic symbols to be inserted in a word processor. You can also use it to produce the code needed to insert phonemic symbols in a web page. To start work, use the buttons below to choose which you want to do.

George Frideric Handel George Frideric Handel (/ˈhændəl/;[1] German: Georg Friedrich Händel; German pronunciation: [ˈhɛndəl]; (1685-02-23)23 February 1685 – 14 April 1759(1759-04-14)) was a German-born Baroque composer famous for his operas, oratorios, anthems and organ concertos. Born in a family indifferent to music, Handel received critical training in Halle, Hamburg and Italy before settling in London (1712), and became a naturalized British subject in 1727.[2] By then he was strongly influenced by the great composers of the Italian Baroque and the middle-German polyphonic choral tradition. Early years[edit] Händel-Haus (2009) – birthplace of George Frideric Handel Entrance of Teatro del Cocomero in Florence From Halle to Italy[edit]

Seven Military Classics The Seven Military Classics (traditional Chinese: 武經七書; simplified Chinese: 武经七书; pinyin: Wǔjīngqīshū; Wade–Giles: Wu ching ch'i shu) were seven important military texts of ancient China, which also included Sun-tzu's The Art of War. The texts were canonized under this name during the 11th century AD, and from the time of the Song Dynasty, were included in most military encyclopedias.[1] For imperial officers, either some or all of the works were required reading to merit promotion, like the requirement for all bureaucrats to learn and know the work of Confucius. There were many anthologies with different notations and analyses by scholars throughout the centuries leading up to the present versions in Western publishing.

English translation of Schubert’s Winterreise, poems by W Muller « Theory of Music Schubert’s Wanderers consists of English translations of the poems of Franz Schubert’s Die Winterreise and Die schöne Müllerin and the German texts as set by Schubert. The German texts are taken from Series 20 (Leider und Gesänge) of Franz Schubert’s Werke, Kritisch durchgesehene Gesammtausgabe, Brietkopf & Härtel, Leipzig, 1895. Schubert’s Wanderers includes a Creative Commons Licence which entitles the purchaser of this book to use and adapt the translations and synopses in any context and in any media, commercial or noncommercial. The United States Army By Jeffrey Hasler Originally published in the July-September 2012 edition of Special Warfare “Let China sleep, for when she awakens the whole world will tremble.” — Napoleon Bonaparte After a decade of large land-power campaigns in southwest Asia and the U.S.