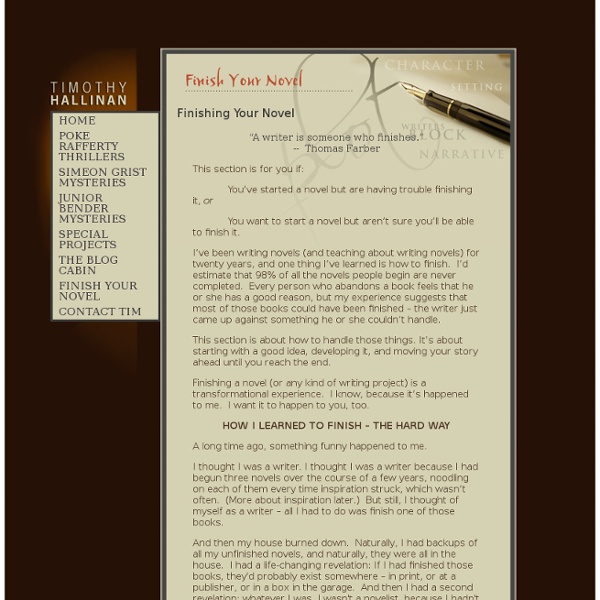 Finishing Your Novel “A writer is someone who finishes.” -- Thomas Farber This section is for you if: You’ve started a novel but are having trouble finishing it, or You want to start a novel but aren’t sure you’ll be able to finish it. I’ve been writing novels (and teaching about writing novels) for twenty years, and one thing I’ve learned is how to finish. This section is about how to handle those things. Finishing a novel (or any kind of writing project) is a transformational experience. A long time ago, something funny happened to me. I thought I was a writer. And then my house burned down. So I made some notes on the book I remembered best, flew to Thailand, and wrote the whole thing in seven weeks. This area of the site is based on what I've learned since then. Related:  How To

Character and Characterisation in the Novel How to write convincing characters Characterisation - the task of building characters - isn't easy. But if you're struggling to build characters with real life and vigour, here is our very own patented technique. If you haven't yet started your book, then work on the exercise below before you start. If you have started, but think that maybe you started prematurely, then back up, do the exercise and then look back over your existing work. Oh, and don't feel patronised at being given exercises. Learning to know your characters Strong characterisation is based on knowledge. The Ultimate Character Builder Begin with a blank sheet (or screen). You should aim to cover at least five pages with this exercise. The less central a character is to your book, the less you need to know him/her. And the exercise will work. Checking your work Once you've got a fair way into your writing (say 5 to 10,000 words), then look back at it. Even genre fiction needs swiftly drawn, believable characters.

``How To Speak and Write Postmodern'' Posted to alt.humor.best-of-usenet by Andrew C Bulhak on 20 June 1995, found in alt.postmodern. by Stephen Katz, Associate Professor, Sociology, Trent University, Peterborough, Ontario, Canada Postmodernism has been the buzzword in academia for the last decade. However, I think the real gulf is not so much positional as linguistic. First, you need to remember that plainly expressed language is out of the question. Sometimes you might be in a hurry and won't have the time to muster even the minimum number of postmodern synonyms and neologisms needed to avoid public disgrace. Now for the test. At some point someone may actually ask you what you're talking about. Daily Zen List — 12 Useful Websites to Improve Your Writing by Johnny Webber 1. Words-to-Use.com – A different kind of thesaurus. 2. OneLook.com – One quick dictionary search tool. 3. 4. 5. 750words.com – Write three new pages every day. 6. 7. 8. 9. 10. 11. 12.

fifteen credibility street Rules for Poets, Now That Anyone Can Write If you use the word 'soul,' you will be shot. Rhymes are appropriate to children's books and high school creative writing assignments. Formulae are beautiful only in mathematics. Repeat after me: "Revolutionary content, revolutionary form." All nights are not endless; all rains not gentle; all skies not azure; &c. It is not a poem just because the line ends before the punctuation. Some writers toss down whatever words come to mind. No wonder we are not all poets. If it hasn't been edited, it is not a poem. It is as difficult to write a poem as it is to write a symphony. Don't kid yourself. The importance of a private memory doesn't justify art. Have you ever torn up a sheet of paper into small pieces, so bad was the poem written on it? If the artist doesn't distinguish between good and bad work, someone else will. Remember: even a monkey can mimic an artist. The world does not need another poem about a bad relationship. Poetry is about words, not ideas.

Max Barry | Fifteen Ways to Write a Novel Every year I get asked what I think about NaNoWriMo, and I don’t know how to answer, because I don’t want to say, “I think it makes you write a bad novel.” This is kind of the point. You’re supposed to churn out 50,000 words in one month, and by the end you have a goddamn novel, one you wouldn’t have otherwise. If it’s not Shakespeare, it’s still a goddamn novel. The NaNoWriMo FAQ says: “Aiming low is the best way to succeed,” where “succeed” means “write a goddamn novel.” I find it hard to write a goddamn novel. Some of these methods I use a lot, some only when I’m stuck. The Word TargetWhat: You don’t let yourself leave the keyboard each day until you’ve hit 2,000 words.

Creative Writing Exercises No matter what stage you're at with your writing, it's always beneficial to work on craft and technique. These creative writing exercises target common problems and weaknesses. Switch Point of View Both first person and third person have their strengths and weaknesses; what works for one story may not work for another. A Day Without Modifiers While modifiers -- adjectives and adverbs -- can add to a story, too many, or the wrong ones, can bog down your prose and lead to weaker nouns and verbs. Avoid Back Story Unlike the other creative writing exercises on this list, this one asks you to work in another genre. Listening for Dialogue Not everyone starts out with an ear for dialogue, but fortunately it can be developed, like any other skill. Description Creative Writing Exercise Who's the most memorable person you've ever met?

Write Like a Girl (or Guy) If all the characters you create talk exactly like you do, no one but your mom is going to want to read your book—and maybe not even her if you haven't called recently. That's why you need to understand how to write dialogue that sounds authentic, even when your character differs from you when it comes to their age, region, education level, social status, background, personality, and/or gender. Each of these factors plays a role in how a person (real or fictional) speaks, and you need to consider all of them to make your characters’ dialogue sound truly legit. Let’s preface this whole shebang with a disclaimer: Like anything involving differences between sexes, this can be a bit of a touchy subject. Things have improved significantly. Handling problems When a friend wants to chat about their bad day, men are more likely to respond with a Vanilla Ice-esque “if there’s a problem, yo, I’ll solve it” approach, giving actionable advice with the goal of making the problem go away. Word choice

How to Write a Prologue for Your Novel: 6 steps The young woman was sprawled out on the ground, her legs kicking feebly. A dark mass was huddled at her head. A man, Henry could see through the darkness. He was whispering something to the woman, who was gripping at the man’s hands, which were wrapped around her throat. Henry thought the woman looked vaguely familiar, but he didn’t stare long enough to find out. Her body was going limp, and the man kneeling there was looking around, focusing on the mouth of the alley. Henry silently dropped back down among the refuse and waited, listening. Henry squeezed his eyes shut and covered his ears so he wouldn’t have to listen to the woman’s strained struggles anymore. Reaching the number one thousand seemed to take him hours. The man, Trouble, was gone. Sightless blue eyes stared unblinkingly at his back as he left the alley.