Gever Tulley: 5 dangerous things you should let your kids do 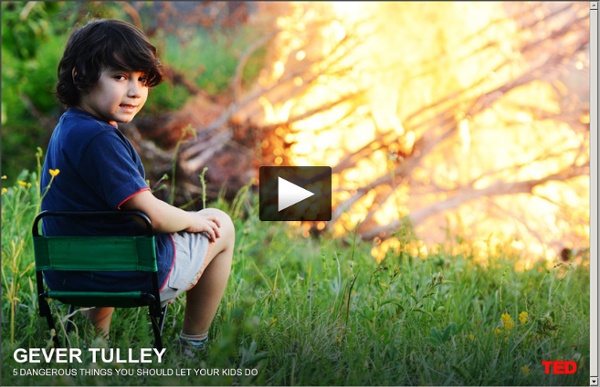 Challenging Play - Risky! - Playground Safety - Kidsafe NSW Inc. Children both need and want to take risks in order to explore their limits, venture into new experiences and for their development. Any injury is distressing for children and those who care for them, but the experience of minor injuries is a universal part of childhood and has a positive role in child development. An ideal environment for developing and testing skills in safe, creative play environments. Children need opportunities to: Develop skills in negotiating the environment (including risks);Learn how to use equipment safely and for its designed purpose;Develop coordination and orientation skills;Take acceptable risks; andLearn about the consequences (positive/negative) of risk taking Risk does not always have a negative outcome.

Why Schools Need to Get Social, Local and Mobile Troy Williams is Vice President and General Manager of Macmillan New Ventures, the global media company’s division that discovers, develops and markets innovative technologies that make learning more engaging. It’s not revelatory that the academic and the tech worlds move at vastly different paces. Education often lags behind when it comes tech adoption and integration. But there has never been a better time for innovation in the classroom. Although public school systems face drastic budget cuts and harsh public scrutiny, we continue to see the private sector (as well as government initiatives) invest in vibrant and disruptive education tech. SEE ALSO: Why Education Needs to Get Its Game On

POV - Filmmakers POV offers a wealth of resources for filmmakers, including video interviews with master nonfiction storytellers, articles with filmmaking tips, and news about funding and calls for entries. New! The Documentary Filmmaking Equipment Survey We asked documentary filmmakers to share what they're actually using in the field and then compiled the results to help you make decisions about cameras, lenses, audio and more. View the results »

Are Playgrounds Too Safe? 11 Things You Didn't Know About Pinball History In 1976, the New York City pinball ban was overturned. The coin-operated amusement lobby (which represented the pinball industry) eventually succeeded in earning a City Council hearing to re-examine the long-standing ban. Their strategy: prove that pinball was a game of skill, not chance, and thus should be legal.

Why Education Needs to Get Its Game On Gerard LaFond is the VP of marketing for Pearson’s College and Career Readiness division and the co-founder of Persuasive Games. He’s currently working on the gamification of education through the Pearson start-up, Alleyoop. Kids spend hours a day on sites like Facebook and YouTube. They play highly immersive video games, watch engrossing shows on their HDTVs and interact with apps on their mobile devices. All of this is in stark contrast to how they spend their days at school, where educators lecture and write on blackboards, then ask kids to read boring textbooks and practice abstract skills or memorize obscure facts.

TSA ← Previous Post Next Post → jon November 23, 2010 0 Related » Run Rover! TU Delft: Prof. Wim Veen Feiten en Cijfers Afdelingen en secties Hoogleraren TBM Back to School : Got a new interactive whiteboard? So it’s mid-August and for many teachers the new school year has begun and for others it’s not too far away. Some of you will be starting at new schools and with that there’s a chance that you’ll be coming to terms with a new interactive whiteboard. You may already be familiar with whiteboards already, and are just starting at a school with a different brand.

Education Needs a Digital-Age Upgrade If you have a child entering grade school this fall, file away just one number with all those back-to-school forms: 65 percent. Chances are just that good that, in spite of anything you do, little Oliver or Abigail won’t end up a doctor or lawyer — or, indeed, anything else you’ve ever heard of. According to Cathy N. Davidson, co-director of the annual MacArthur Foundation Digital Media and Learning Competitions, fully 65 percent of today’s grade-school kids may end up doing work that hasn’t been invented yet. The contemporary American classroom, with its grades and deference to the clock, is an inheritance from the late 19th century. So Abigail won’t be doing genetic counseling.