Revolving door (politics) In politics, the "revolving door" is a movement of personnel between roles as legislators and regulators and the industries affected by the legislation and regulation. 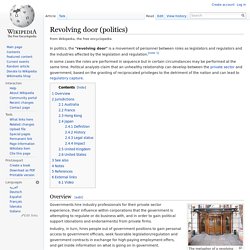 [note 1] In some cases the roles are performed in sequence but in certain circumstances may be performed at the same time. Political analysts claim that an unhealthy relationship can develop between the private sector and government, based on the granting of reciprocated privileges to the detriment of the nation and can lead to regulatory capture. The metaphor of a revolving door has been used to describe people switching jobs, from working as lawmakers, to being lobbyists, and vice versa. Governments hire industry professionals for their private sector experience, their influence within corporations that the government is attempting to regulate or do business with, and in order to gain political support (donations and endorsements) from private firms.

Harlem Shake - Stuck in a Revolving Door - The Party Animals. The Carlyle Connection (Shuchen Tan, VPRO Backlight 2003) Scienceguide: Zijlstra gispt werkgevers. ­Block the revolving door. 50 per cent or more of our laws come from Brussels and it is vital that these decisions work in the interests of people and environment, and not just big business. 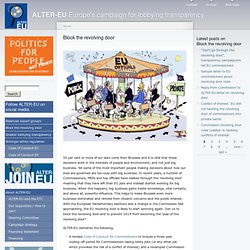 Yet some of the most important people making decisions about how our lives are governed are too-cosy with big business. In recent years, a number of Commissioners, MEPs and top officials have walked through the 'revolving door' meaning that they have left their EU jobs and instead started working for big business. When this happens, big business gains inside-knowledge, vital contacts, and above all, powerful influence. This helps to make Brussels even more business-dominated and remote from citizens’ concerns and the public interest. With the European Parliamentary elections and a change in the Commission fast approaching, the EU revolving door is likely to start spinning again. Revolving DoorWatch. Revolving door brussels-carrousel. The value of the revolving door: Political appointees and the stock market. The presidential election campaign is in full swing in the US. 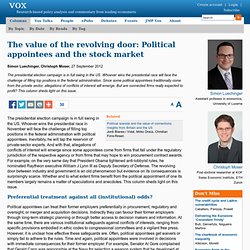 Whoever wins the presidential race will face the challenge of filling top positions in the federal administration. Since some political appointees traditionally come from the private sector, allegations of conflicts of interest will emerge. But are connected firms really expected to profit? This column sheds light on this issue. 'Blind eye' turned to revolving door of EU lobbying. A worrying number of officials go through the 'revolving door', leaving their EU job to work for big business and lobby groups often in the same policy area, says campaign group Is it right for senior officials in the European Commission jump into lobby jobs, and influence their former colleagues in their new employers' interest?

Should a former head of cabinet be entitled to set up her own European Union lobby consultancy? Or a retired energy advisor be allowed to lobby for carbon capture and storage? The commission's rules say such conflicts of interest should be prevented – but the commissioner responsible seems prepared to turn a blind eye. 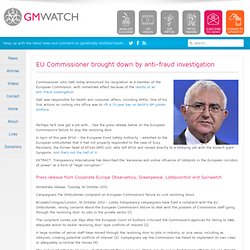 Dalli was responsible for health and consumer affairs, including GMOs. One of his first actions on coming into office was to lift a 13-year ban on BASF's GM potato Amflora. Perhaps he'll now get a job with... Revealed: revolving door facilitates tobacco lobby meetings. In the Commission's response to Parliament's questions about contacts with tobacco lobbyists, it notes that the Commission's Legal Service does not have contacts with industry representatives (companies or associations) on policy matters, but with legal experts, limited to issues of EU law. 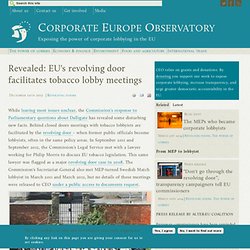 Yet, it goes on to remark that “two brief conversations took place between Legal Service officials and Mr Michel Petite (former Director-General of the Legal Service until 2007, and now an Avocat in Paris)” in September 2011 and in September 2012. “Mr Petite mentioned that his law firm provided legal advice to a tobacco company (Philip Morris International) and set out his views on some legal issues of tobacco legislation,” after which “Director-General Luis Romero asked to be personally updated by Mr Petite of his legal counsel activities in this area” leading to a meeting on 14 November 2012.” 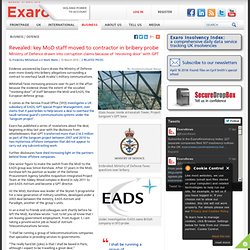 Whitehall faces increasing pressure over its part in the affair because the evidence shows the extent of the so-called “revolving door” of staff between the MoD and EADS, the European defence group. It comes as the Serious Fraud Office (SFO) investigates a UK subsidiary of EADS, GPT Special Project Management, over claims that it paid bribes to help secure a deal to overhaul the Saudi national guard’s communications systems under the ‘Sangcom project’. Exaro has published a series of revelations about the deal, beginning in May last year with the disclosure from whistleblowers that GPT transferred more than £14.5 million as part of the Sangcom project between 2007 and 2010 to two mysterious offshore companies that did not appear to carry out any sub-contracting work. Kershaw became a GPT director in September 2011. Haagse draaideur draait door Chris Buijink naar NVB Nederlandse Vereniging van Banken. Jessica de Vlieger Topambtenaar Chris Buijink gaat leiding geven aan de Nederlandse Vereniging van Banken en neemt het roer over van ‘Malle Boele’. 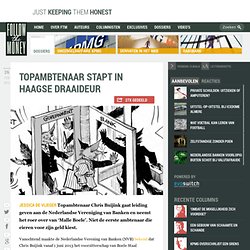