In Praise of Leisure - The Chronicle Review 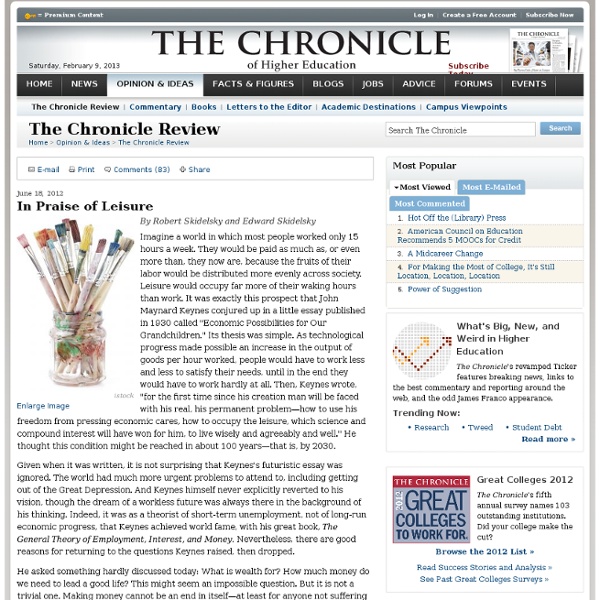 By Robert Skidelsky and Edward Skidelsky Imagine a world in which most people worked only 15 hours a week. They would be paid as much as, or even more than, they now are, because the fruits of their labor would be distributed more evenly across society. Leisure would occupy far more of their waking hours than work. It was exactly this prospect that John Maynard Keynes conjured up in a little essay published in 1930 called "Economic Possibilities for Our Grandchildren." Given when it was written, it is not surprising that Keynes's futuristic essay was ignored. He asked something hardly discussed today: What is wealth for? We in the West are once more in the midst of a Great Contraction, the worst since the Great Depression. The first defect is moral. Second, the crisis has exposed capitalism's palpable economic problems. So let us imagine that everyone has enough to lead a good life. Let's begin by pondering the reasons for the failure of Keynes's prophecy. It was not ever thus.

Dancing on the Sand - By Bruce Jones At 4:00 a.m. on Tuesday morning, 1,000 or so advanced delegates at Rio+20 (formally, the United Nations Conference on Sustainable Development) laid down their pens and shut off their laptops. At noon, Brazil's worldly foreign minister, Antonio Patriota, gaveled through the Outcome Document from the chair. And by mid-afternoon, Rio was full of a sound to which that joyous city is unaccustomed: the collective moan of 40,000 environmentalists disappointed about the results. (Yes, you read that right: 40,000. Alongside 10,000 official government participants.) That the Rio outcome fell short of the highest expectations was not only predictable, it was predicted -- by everybody. There were some avoidable mistakes. In practice, though, the best-organized process in the world wasn't going to produce serious outcomes on environment issues, either in Rio or Mexico City. What's more, the outcomes from Rio aren't all bad. The U.N. is not alone in having had a tough week.

3 Ways to Get Inspired (And Leave Your Slump Behind) | Dan Bolton We all, from time to time, can fall into a slump. A low muddy bog of emotion. Sometimes it can feel as strong as an all consuming depression, anxiety or apathy. Other times it can simply be a lack of focus & a struggle to get things, anything, done. I know, because in the last few months, at different times, I’ve ticked all these boxes and more – Often wanting to DDT my inner man until he comes to his senses. In the midst of all of this, however, there is hope. The lie we can begin to believe is that we’re completely helpless to everything happening to us and basically curl up into the foetal position, figuratively or literally (Guilty), and wait for life to deal us better cards. We can simply be 1 inspiring idea, experience or person away from entering into a new day. Here are 3 to get you started. What we can often perceive as boredom and a lack of passion may really just be familiarity. Here are a few places to help you get started. TED: Ideas Worth Spreading iTunes University

"Labor’s Paradise Lost" by Robert Skidelsky LONDON – As people in the developed world wonder how their countries will return to full employment after the Great Recession, it might benefit us to take a look at a visionary essay that John Maynard Keynes wrote in 1930, called “Economic Possibilities for our Grandchildren.” Keynes’s General Theory of Employment, Interest, and Money, published in 1936, equipped governments with the intellectual tools to counter the unemployment caused by slumps. In this earlier essay, however, Keynes distinguished between unemployment caused by temporary economic breakdowns and what he called “technological unemployment” – that is, “unemployment due to the discovery of means of economizing the use of labor outrunning the pace at which we can find new uses for labor.” Keynes reckoned that we would hear much more about this kind of unemployment in the future. Machines were rapidly replacing human labor, holding out the prospect of vastly increased production at a fraction of the existing human effort.

This Blog Rules | Why go elsewhere? "Rio’s Unsustainable Nonsense" by Jagdish Bhagwati Exit from comment view mode. Click to hide this space NEW YORK – If George Orwell were alive today, he would be irritated, and then shocked, by the cynical way in which every lobby with an axe to grind and money to burn has hitched its wagon to the alluring phrase “sustainable development.” Thus, the International Labor Organization and trade-union lobbies have managed to insert “Decent Jobs” into the seven priority areas at the Rio conference. No one should pretend that we can magically offer decent jobs to the huge numbers of impoverished but aspiring workers in the informal sector. The flavor of the week in Rio is “sustainability indexing” for corporations, by way of corporate social responsibility (CSR). Corporations can, of course, be asked to conform to a “don’t” list – don’t dump mercury into rivers, don’t employ children for hazardous tasks, etc. Even when the Rio+20 agenda includes something more properly “environmental” – say, the supply of water – platitudes predominate.

Books of Adam Don't Sweat the Bond Markets The ongoing eurozone debacle has driven home certain straightforward lessons: the fiscal rules enshrined in the EU's 1997 Stability and Growth Pact had almost no teeth, government bonds of EU nations are not a risk-free asset, and voters do not readily tolerate economic austerity. Beyond these, however, the last few years have also contained subtle lessons about the relationship between governments and capital markets. More specifically, they have shown that our understanding of the pressures that private capital markets place on governments is incomplete. Although holders of government debt certainly would react markedly to a change in the membership of the eurozone, they would not likely react strongly, or over the longer term, to many other government policy decisions and political outcomes. And these reactions have varying consequences for governments, depending on how governments have managed their debt profiles. To continue reading, please log in. Don't have an account? Register

"Fast Food’s “Ethnic Insights”" by Andrew Billo Exit from comment view mode. Click to hide this space NEW YORK – There is no denying the fast-food industry’s contribution to America’s obesity epidemic. Now, Asians and Asian-Americans could follow on this path, as major fast-food chains like McDonald’s target them disproportionately. Although Asian-Americans amount to only 6% of the United States’ population, the marketing magazine Advertising Age reports that for every nine focus groups that McDonald’s organizes, two (22%) are Asian-focused, while another four center on other minorities. At the Asia Society’s Diversity Leadership Forum earlier this month in New York, McDonald’s Director of Ethnic Marketing Vivien Chen described how the company has focused its marketing on the ethnic consumer. Chen claims that its strategy – called “Leading with ethnic insights” – shows the company’s commitment to the Asian-American consumer. In fact, this link represents the scope of Asia’s incipient obesity problem.