Forgiving the Nazis is incomprehensible – but it has saved one survivor’s life. Forgiveness is hotly contested territory – contentious, risky, messy, misunderstood and potentially divisive. 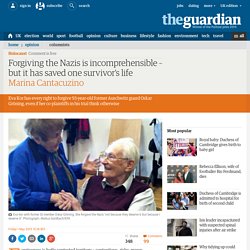 While it is most certainly a transformative and powerful route to healing, capable of restoring broken relationships and rebuilding fragmented communities, it can also tear families apart, pitting victims and survivors against each other. The Haunting Story Behind One Of Gustav Klimt's Most Famous Paintings. Maria Altmann was in her '80s when she entered into a legal battle with the Austrian government in order to reclaim Gustav Klimt's "Portrait of Adele Bloch-Bauer I" and other Nazi-plundered Klimt paintings. 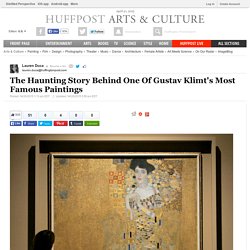 The artwork had been stolen from her family's home after she escaped from Austria as a Jewish refugee of the Holocaust during World War II. Never certain she would even live to see a verdict, Altmann's fight wasn't about money or revenge. Soren Kam: Most-wanted Nazi dies aged 93 a free man - Europe - World - The Independent. Danish former volunteer officer Søren Kam died on 23 March, just a little more than a fortnight after his wife passed away – according to the German newspaper Allgauer Zeitung as reported by Reuters. 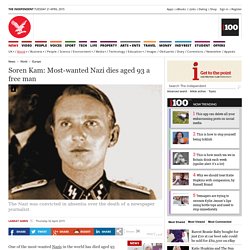 Kam was the fifth-most wanted war criminal by Jewish rights organisation Simon Wiesenthal Center, that seeks to bring former Nazis to justice and educate about the Holocaust. ‘Accountant of Auschwitz’ goes on trial in Germany. A 93-year-old man who was assigned to confiscate the luggage of prisoners arriving at Auschwitz concentration camp in his capacity as an SS guard has gone on trial in Germany , charged with complicity in the murder of 300,000 Holocaust victims. 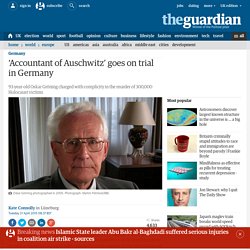 Oskar Gröning, referred to as ‘the accountant of Auschwitz’, is standing trial in the north German town of Lüneburg in what is a hugely symbolic act as part of authorities’ last-ditch attempt to put the handful of remaining Nazi death camp guards in the dock before they die. Only 43 of the 6,500 SS members who worked in the concentration camps have ever faced prosecution. Of those only 25 went to prison and the rest were acquitted. Unusually, Gröning has been quite outspoken about the two years he spent in Auschwitz, describing in an autobiography as well as lengthy interviews, some of the horrors he witnessed, and admitting that the events have haunted him his entire life. He admitted knowing about the gas chambers. The Haunting Story Behind One Of Gustav Klimt's Most Famous Paintings. How Two Sisters’ Love Helped Them Survive Auschwitz. On March 26, 1942, in Poprad, Slovakia, 998 women boarded a train. 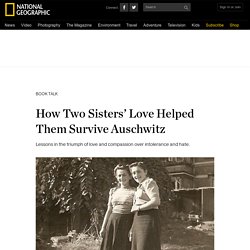 They thought they were going to a work camp. They were on their way to a death camp. One of those on the first registered Jewish transport to Auschwitz was a 17-year-old Polish girl named Rena Kornreich, who’d been working in Slovakia as a nanny. 2015 Bruntwood Prize Competition open to submissions. The Bruntwood Prize – the biggest playwriting competition in the UK – has been launched, so time to get your scripts ready before the June deadline! 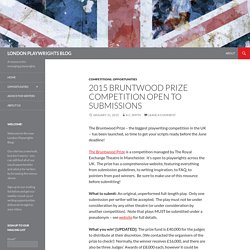 The Bruntwood Prize is a competition managed by The Royal Exchange Theatre in Manchester. It’s open to playwrights across the UK. The prize has a comprehensive website, featuring everything from submission guidelines, to writing inspiration, to FAQ, to pointers from past winners. Be sure to make use of this resource before submitting! What to submit: An original, unperformed full-length play. The World Is Full of Holocaust Deniers - Emma Green. A new survey suggests that many Asians, Africans, Middle Easterners, young people, Muslims, and Hindus believe that facts about the genocide have been distorted. 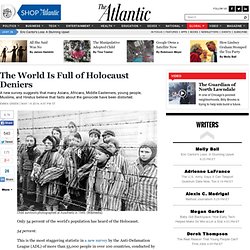 Child survivors photographed at Auschwitz in 1945. (Wikimedia) Retired Japanese Fighter Pilot Sees an Old Danger on the Horizon. Photo NAGANO, Japan — Kaname Harada was once a feared samurai of the sky, shooting down 19 Allied aircraft as a pilot of ’s legendary Zero fighter plane during . 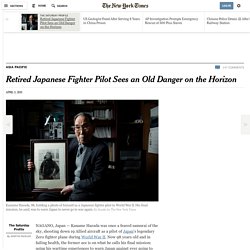 Now 98 years old and in failing health, the former ace is on what he calls his final mission: using his wartime experiences to warn Japan against ever going to war again. This has become a timely issue in Japan, as the conservative prime minister, Shinzo Abe, has called for revising Japan’s pacifist Constitution. On a recent afternoon in this alpine city near his home, Mr. Harada was invited to address a ballroom filled with some 200 tax accountants and their business clients. Edelweiss Pirates. Memorial for the Cologne victims on Schönstein Str, next to the Bahnhof History (1930s)[edit] The origins of the Edelweißpiraten can be traced to the period immediately prior to World War II, as the state-controlled Hitler Youth was mobilized to serve the state, at the expense of the leisure activities previously offered to young people. 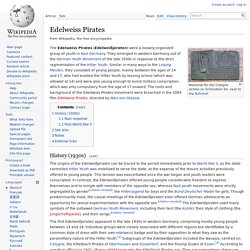 This tension was exacerbated once the war began and youth leaders were conscripted. In contrast, the Edelweißpiraten offered young people considerable freedom to express themselves and to mingle with members of the opposite sex, whereas Nazi youth movements were strictly segregated by gender[citation needed], the Hitler-Jugend for boys and the Bund Deutscher Mädel for girls. AN ESSENTIAL HOLOCAUST FILM. ~ Posted by Caroline Moorehead, January 27th 2015 In the closing weeks of the second world war, work began on an uncompromising and essential documentary about the Holocaust, which is being remembered today on Holocaust Memorial Day and the 70th anniversary of the liberation of Auschwitz. 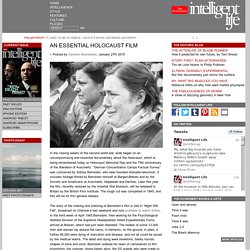 “German Concentration Camps Factual Survey” was conceived by Sidney Bernstein, who later founded Granada television. It includes footage filmed by Bernstein himself at Bergen-Belsen and by the Soviets and Americans at Auschwitz, Majdanek and Dachau. German couple pay Greece £630 'war reparations' A German couple visiting Greece walked into a town hall and handed over €875 (£630) in what they said were second world war reparations. Dimitris Kotsouros, the mayor of Nafplio, a seaport in the Peloponnese, said: “They came to my office yesterday morning, saying they wanted to make up for their government’s attitude.

They made their calculations and said each German owed €875 for what Greece had to pay during world war two.” 17 Haunting Historical Photos Of Children At Play During Wartime. One of the worst aspects of war is the devastating effect of the fighting on the lives of children. While bearing no responsibility for the conflict, kids nevertheless bear the impact of trauma and violence on an unconscionable scale. Even today, with international laws and conventions in place to protect the rights of children in conflict, too many kids are still suffering. An estimated 14 million children are currently living through hardship caused by war in Iraq and Syria, according to the United Nations. NG Live!: Adrian Myers: Where Nazis Were the Prisoners. Germany's Unpaid Debt to Greece: Economist Albrecht Ritschl on WWII Reparations That Never Were. Albrecht Ritschl, professor of economic history at the London School of Economics.

(Screen grab via Proud2bGreek1 / YouTube)In this interview, Albrecht Ritschl, professor of economic history at the London School of Economics, discusses Germany's unpaid war debts and reparations to Greece from World War II, and characterizes Germany as the biggest debt transgressor of the 20th century. Michael Nevradakis: Many people are not aware of the occupation loan that the Nazi regime forced Greece to give during World War II. Tell us a brief history about this issue.

World War II Erupts: Color Photos From the Invasion of Poland, 1939. On Sept. 1, 1939, one week after Nazi Germany and the Soviet Union signed a non-aggression pact, more than a million German troops—along with 50,000 Slovakian soldiers—invaded Poland. Two weeks later, a half-million Russian troops attacked Poland from the east. Survivor testimonies. In this section you can listen to the testimonies of Holocaust survivors.

Choose from the following six topics to find out more. Further interviews with Jewish survivors of the Holocaust can be found on the Sounds website. Life before the Holocaust Survivors in this section talk about how they encountered anti-Semitic discrimination before the war. Profile: John Demjanjuk, Nazi foot soldier. After a lengthy trial, Demjanjuk was found guilty of all charges and sentenced to death in 1988, only to be freed five years later when evidence surfaced proving Israel had got the wrong man. The Voice of the Survivors. Throughout our website the voices of the survivors infuse our online exhibitions, historical narratives, teaching units and ceremonies with content and with meaning.

We have gathered many of those testimonies in this section where they can be easily accessed by either topic or location. This section will continue to grow as more and more testimonies are added to the website. "For whoever listens to a witness becomes a witness" Excerpt from a speech given by Elie Wiesel at Yad Vashem Places. Hidden Children: Hardships. Parents, children, and rescuers faced daunting challenges once the decision was made to go into hiding. Some children could pass as non-Jews and live openly. Those who could not had to live clandestinely, often in attics or cellars. Yale University Library. Museum Created for Germans Who Hid Jews « The International Raoul Wallenberg Foundation. BERLIN — Barbara Preusch vividly remembers the day the Nazis searched her Berlin home for hidden Jews _ and left without finding the mother and daughter her family was sheltering.

Jew hiding in Nazi Berlin had to kill her unborn baby to survive WW2. The frightened young girl chose the solitude of a sunlit allotment garden behind a Berlin tenement block to destroy the life inside her. A child was an impossibility for Marie Jalowicz if she wanted to live. Without the boring stuff (all contents copyrighted ©) 10 great films about children in wartime. Au revoir les enfants (1987) Au revoir les enfants is back in cinemas, including an extended run at BFI Southbank, from 30 January.