PEACEFUL FEMALE PROTESTORS PENNED IN THE STREET AND MACED!- #OccupyWallStreet 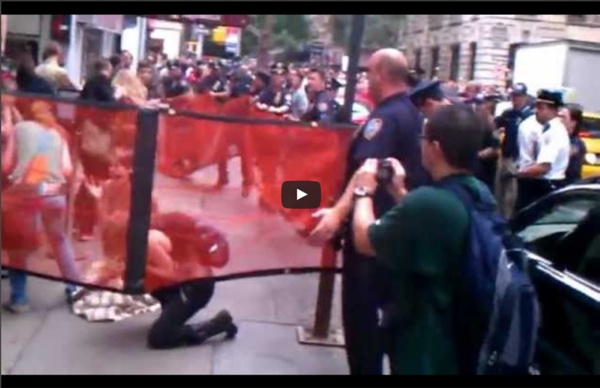 We Are the 99 Percent 14th October 2013 Question with 172 notes Anonymous asked: How can you claim to speak for 99% of people? We don’t claim to speak for anyone, we merely present stories. 14th October 2013 Photo with 186 notes I am 23 years old I am a female (not that it should make a difference, but apparently in our society it does…) From the day I moved out of my parent’s house, I’ve supported myself 100%, not because they don’t love me but because they can’t support my dreams financially. For over two years I schlepped 2-for-1’s and shots to pay for my rent, a used car, and tuition at a community college. Now I’m attending the University of MN and I depleted all of my savings just so I wouldn’t have to take out a loan this semester. I’m majoring in journalism, a profession I consider a civic duty. I am the 99%. occupywallst.org 14th October 2013 Question with 12 notes Anonymous asked: We are the 99 percent- Why don't we RECALL these extremist NUTS that are in Washington, DC.??!!!! 9th September 2013 Thank you!

Police Respond With Aggression to Wall Street Protests Police Respond With Aggression to Wall Street Protests Posted on Sep 25, 2011 Protesters claim 80 arrests were made Saturday as the occupation of Wall Street by scores of mostly young demonstrators turned violent, with police corralling, wrestling and appearing to pepper-spray participants. WNYC radio reported that the arrests were mostly for “disorderly conduct, obstructing vehicular and pedestrian traffic, resisting arrest and, in one case, assaulting a police officer, the police said.” In response to the aggressive tactics used by police, organizers of the protest on their website Sunday demanded the arrest of one officer and the resignation of Police Commissioner Raymond W. The Huffington Post: Tensions are rising at the Occupy Wall Street protest, currently in its eighth day, as organizers for the protest claim that 80 have been arrested. More Below the Ad New and Improved Comments If you have trouble leaving a comment, review this help page.

ANTHONY BOLOGNA = GUILTY : Occupy Wall Street: 'Pepper-spray' officer named in Bush protest claim | World news A senior New York police officer accused of pepper-spraying young women on the "Occupy Wall Street" demonstrations is the subject of a pending legal action over his conduct at another protest in the city. The Guardian has learned that the officer, named by activists as deputy inspector Anthony Bologna, stands accused of false arrest and civil rights violations in a claim brought by a protester involved in the 2004 demonstrations at the Republican national convention. Then, 1,800 people were arrested during protests against the Iraq war and the policies of president George W Bush. Alan Levine, a civil rights lawyer representing Post A Posr, a protester at the 2004 event, told the Guardian that he filed an action against Bologna and another officer, Tulio Camejo, in 2007. Levine said that when he heard about the pepper spray incident "a bunch of us were wondering if any of the same guys were involved". Levine said: "Police contend that Posr hit the man with a rolled-up newspaper.

‘Occupy Wall Street’ Protests Turn Violent; Video Shows Police Macing Women Sep 25, 2011 1:03pm (Tina Fineberg/AP Photo) ABC News’ Olivia Katrandjian reports: Video posted by the group Occupy Wall St from the eighth day of protests against corporations show police using Tasers and mace to control the crowd, which the group says has only made it more committed to keep up the demonstrations in lower Manhattan for the long haul. A New York Police Department spokeswoman today confirmed the group’s claim that approximately 80 people were arrested Saturday, mainly for disorderly conduct and obstructing vehicular and pedestrian traffic. “One person was arrested for assaulting a police officer,” she said. She added that no arrests have been made today. The spokeswoman could not confirm whether police officers are using mace, Tasers or netting against protesters. Among the video clips on the Occupy Wall Street website is one that shows a police officer macing a group of young women penned in by orange netting. “You can still leave without being arrested.

Economic Rebellion Update – This Is What Decentralized Resistance Looks Like By David DeGraw, AmpedStatus Report “There’s something happening here… Hey, what’s that sound? Everybody look what’s going down…” - Buffalo Springfield Exciting times over here, to say the least! The June 14th Flag Day Rebellion against economic tyranny is growing much stronger and more rapidly than anticipated. As a small part of a decentralized movement, it’s hard to measure the overall impact, but my email inbox is exploding with support and interest. People who spent their career working on Wall Street are “done sitting idle while the market is rigged in favor of a handful of politically connected global banks and firms.” For those not up to date, this is what everyone is uniting and rallying around: This Flag Day, Tuesday June 14th, we will launch a non-violent movement with this list of demands:* End the campaign finance and lobbying racket * Break up the Fed & Too Big to Fail banks * Enforce RICO laws against organized criminal class * Order Ben Bernanke to step down

Occupying Wall Street: A Firsthand Account A first hand account of the protests outside the New York Stock Exchange: For months, every time I passed the New York Stock Exchange, I wondered why people weren’t rioting in the streets. Do Americans not realize that Wall Street has completely hijacked our government and economy? Do they not understand that the corporate elites who have trashed the global economy now have more wealth and power than before the financial crisis? Finally, people are starting to fight back. The protests rocking the financial district the last couple of days could be a significant spark, and they offer much hope. On Saturday, a friend of mine was in the Financial District. Upon hearing this I immediately headed out to see what was going on. A couple minutes later, I found a big crowd of people, mostly young, in nearby One Liberty Plaza. After spending a few hours discussing issues in groups and then in a broader general assembly, we hit the streets. So we moved on. Please join us.

Foreclosure Fraud - Fighting Foreclosure Fraud by Sharing the Knowledge Treason Against the American People: #OccupyWallStreet Grandma Speaks Out The lack of REAL action by State and Federal Politicians and the Judiciary, on behalf of the American people, has and is destroying lives and our country. What Wall Street, Financial Institutions, and Corporations have been allowed to do to Americans borders on treason by our very own Town, County, State and Federal Politicians as well as most of the Judiciary from SCOTUS on down, who enable them, even take political contributions from them. The bleeding on the streets began hemoraging after the slow erosion, begun during the Reagan years, and ultimate repeal of Glass-Steagal. In this Treasonous War on the Financial Security of the Citizens of America, Congress has been complicit for 30 years! And the media is their tool to misinform and divide the 99% of us. Stop being divided. It's time to collectively form our battle lines. Why Treason? Treason against the United States, shall consist only in levying War against them, or in adhering to their Enemies, giving them Aid and Comfort. 1. 2.