25 Reasons Why You MUST Go To Burning Man Once In Your Life. Burning Man is the biggest and most bizarre party in the world, comprised of 60,000 people camping in the desert of Nevada for a week. 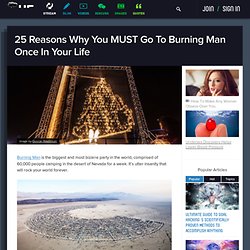 It’s utter insanity that will rock your world forever. photo by Duncan Rawlinson Here are 25 reasons why you won’t be able to stop yourself from going after reading this article… Art Installations Workshops The Burning Man guide is full of hundreds of workshops, ranging from the most depraved spanking classes to the most spiritual meditation/yoga classes.

Clay_deWaal_2013b.pdf. Real-world beaming: The risk of avatar and robot crime. First it was the telephone, then web cameras and Skype, now remote "presence" is about to take another big step forward - raising some urgent legal and ethical questions. 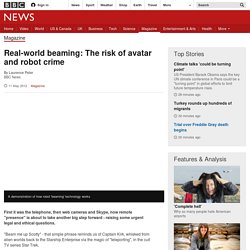 "Beam me up Scotty" - that simple phrase reminds us of Captain Kirk, whisked from alien worlds back to the Starship Enterprise via the magic of "teleporting", in the cult TV series Star Trek. Beaming, of a kind, is no longer pure science fiction. It is the name of an international project funded by the European Commission to investigate how a person can visit a remote location via the internet and feel fully immersed in the new environment. The visitor may be embodied as an avatar or a robot, interacting with real people. Motion capture technology - such as the Microsoft Kinect games console - robots, 3D glasses and special haptic suits with body sensors can all be used to create a rich, realistic experience, that reproduces that holy grail - "presence". The cinema experience could also be "augmented". Modern Play Things.

Self Sufficiency. The Graph Of Ideas. Welcome to Google Island. Google IO attendees visit Google’s virtual island Photo: Alex Washburn/Wired I awoke aboard a boat, just before daybreak, which was weird. 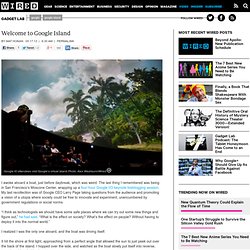 The last thing I remembered was being in San Francisco’s Moscone Center, wrapping up a four-hour Google I/O keynote liveblogging session. My last recollection was of Google CEO Larry Page taking questions from the audience and promoting a vision of a utopia where society could be free to innovate and experiment, unencumbered by government regulations or social norms. “I think as technologists we should have some safe places where we can try out some new things and figure out,” he had said. “What is the effect on society? I realized I was the only one aboard, and the boat was driving itself. It hit the shore at first light, approaching from a perfect angle that allowed the sun to just peek out over the back of the island. Things I Carry: Why Paper is Essential for Big Ideas. 4 Multiplicities. Laugh Out Loud. Societal Gumbo. How to Build the Perfect Workplace. Data Aesthetics. Modern Culture. Lively Venues. Music Faves.

COOL STUFF. New Gaming. Sustenance. How Does TaskRabbit Work? TaskRabbit connects you to safe and reliable help in your neighborhood. Soul Intent Arts - Ancient Healing, Modern Shamanism - S. Kelley Harrell. In Praise of Leisure - The Chronicle Review. By Robert Skidelsky and Edward Skidelsky Imagine a world in which most people worked only 15 hours a week. 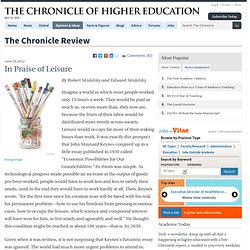 They would be paid as much as, or even more than, they now are, because the fruits of their labor would be distributed more evenly across society. Leisure would occupy far more of their waking hours than work. It was exactly this prospect that John Maynard Keynes conjured up in a little essay published in 1930 called "Economic Possibilities for Our Grandchildren. " Its thesis was simple. Given when it was written, it is not surprising that Keynes's futuristic essay was ignored. He asked something hardly discussed today: What is wealth for? We in the West are once more in the midst of a Great Contraction, the worst since the Great Depression. 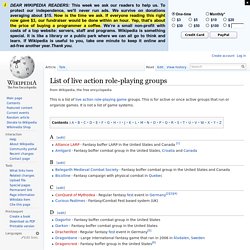 This is for active or once active groups that run or organize games. It is not a list of game systems. A[edit] Alliance LARP - Fantasy boffer LARP in the United States and Canada [1]Amtgard - Fantasy boffer combat group in the United States, Croatia and Canada B[edit] Knutepunkt - Nordic Larp Wiki. Knutepunkt is an annual conference on Nordic style larp which has been running since the first event in Norway in 1997. 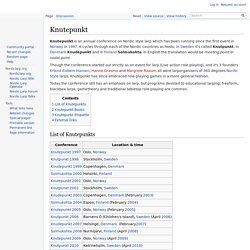 It cycles through each of the Nordic countries as hosts; in Sweden it's called Knutpunkt, in Denmark Knudepunkt and in Finland Solmukohta. In English the translation would be meeting point or nodal point. Though the conference started out strictly as an event for larp (Live action role-playing), and it's 3 founders Erlend Eidsem Hansen, Hanne Grasmo and Margrete Raaum all were larporganisers of 360 degrees Nordic Style larps, Knutepunkt has since embraced role-playing games in a more general fashion. Today the conference still has an emphasis on larp, but programs devoted to educational larping, freeform, blackbox larps, gametheory and traditional tabletop role-playing are common.

Related:  Old techniques   -  How Does TaskRabbit Work?   -  TaskRabbit connects you to safe and reliable help in your neighborhood.   -  Education   -  Enterprise