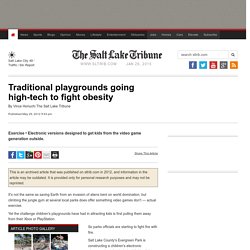 Salt Lake County's Evergreen Park is constructing a children's electronic playground set that includes blinking lights, an LED controller and its own computer server to ignite the same senses in kids that video games do. The park at 3425 S. Evergreen Ave. (2230 East) is undergoing a complete renovation and opens in August. Salt Lake County Parks & Recreation Project Manager Morgan Selph turned to Danish playground equipment manufacturer Kompan, which produces playsets that offer different electronic games built in to the climbing and spinning on the set. 5 Ways to Take Technology Outdoors. As mobile devices become ever more embedded in daily life, there is a role they can play in enhancing the experience of nature that often gets overlooked. 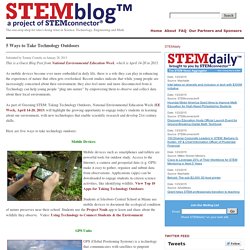 Recent studies indicate that while young people are increasingly concerned about their environment, they also feel more and more disconnected from it. Technology can help young people “plug into nature” by empowering them to observe and collect data about their local environments. As part of Greening STEM: Taking Technology Outdoors, National Environmental Education Week (EE Week, April 14-20, 2013) will highlight the growing opportunity to engage today's students in learning about our environment, with new technologies that enable scientific research and develop 21st century skills. Taking the Learners and Technology Outdoors. I began my career as an educator as an outdoor educator. 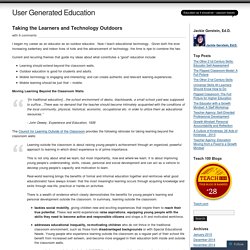 Now I teach educational technology. Given both the ever increasing sedentary and indoor lives of kids and the advancement of technology, the time is ripe to combine the two. Current and recurring themes that guide my ideas about what constitutes a “good” education include: Learning should extend beyond the classroom walls.Outdoor education is good for students and adults.Mobile technology is engaging and interesting; and can create authentic and relevant learning experiences.Mobile learning should be just that – mobile.

Moving Learning Beyond the Classroom Walls The Council for Learning Outside of the Classroom provides the following rationale for taking learning beyond the classroom walls: The Benefits of Outdoor Education. Children growing weaker as computers replace outdoor activity. Children are becoming weaker, less muscular and unable to do physical tasks that previous generations found simple, research has revealed. 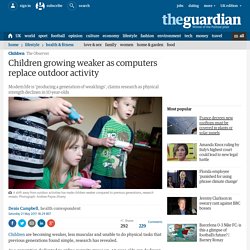 As a generation dedicated to online pursuits grows up, 10-year-olds can do fewer sit-ups and are less able to hang from wall bars in a gym. Arm strength has declined in that age group, as has their ability to grip an object firmly. The findings, published in the child health journal Acta Paediatrica, have led to fresh concern about the impact on children's health caused by the shift away from outdoor activities. Academics led by Dr Gavin Sandercock, a children's fitness expert at Essex University, studied how strong a group of 315 Essex 10-year-olds in 2008 were compared with 309 children the same age in 1998.

2013. Seven myths about young children and technology. There has been widespread media coverage about the advantages and disadvantages of children being exposed to computers and other digital media at ever-younger ages, but research evidence to inform this debate is limited. 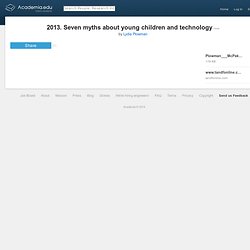 In its absence, a... more There has been widespread media coverage about the advantages and disadvantages of children being exposed to computers and other digital media at ever-younger ages, but research evidence to inform this debate is limited. In its absence, a number of myths about children’s experiences with technologies have emerged. We select seven statements, both for and against children’s use of technology, to represent positions we have come across from the media, parents and educators. Findings from detailed case studies of the everyday lives of three- and four-year-old children in Scotland are used to interrogate some of these myths. Download (.pdf) Share Loading Preview. Kids And Screen Time: What Does The Research Say? : NPR Ed. Kids are spending more time than ever in front of screens, and it may be inhibiting their ability to recognize emotions, according to new research out of the University of California, Los Angeles. 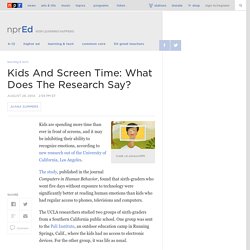 The study, published in the journal Computers in Human Behavior, found that sixth-graders who went five days without exposure to technology were significantly better at reading human emotions than kids who had regular access to phones, televisions and computers. The UCLA researchers studied two groups of sixth-graders from a Southern California public school.

One group was sent to the Pali Institute, an outdoor education camp in Running Springs, Calif., where the kids had no access to electronic devices. For the other group, it was life as usual. At the beginning and end of the five-day study period, both groups of kids were shown images of nearly 50 faces and asked to identify the feelings being modeled. A Wake-Up Call For Educators There's a big takeaway for schools, Greenfield says. Balance Technology With Outdoor Play Time for Healthier Kids - Parenting - NewsUSA Copyright-Free Articles. Outdoor, indoor, technology, nature – it’s all important child’s play. By Rachel Broadley Jane Webb-Williams (centre) observing children playing. 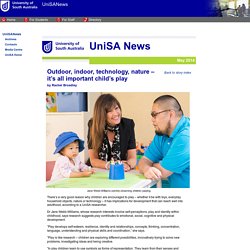 There’s a very good reason why children are encouraged to play – whether it be with toys, everyday household objects, nature or technology – it has implications for development that can reach well into adulthood, according to a UniSA researcher. Dr Jane Webb-Williams, whose research interests involve self-perceptions, play and identity within childhood, says research suggests play contributes to emotional, social, cognitive and physical development. “Play develops self-esteem, resilience, identity and relationships, concepts, thinking, concentration, language, understanding and physical skills and coordination,” she says.

Does technology hinder or help toddlers' learning? 19 April 2013Last updated at 17:38 ET By Philippa Roxby Health reporter, BBC News Screen time could help children as young as two to learn words and be curious Children under five years old have an uncanny knack of knowing how to master new technology. 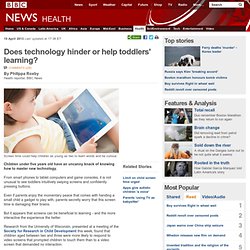 From smart phones to tablet computers and game consoles, it is not unusual to see toddlers intuitively swiping screens and confidently pressing buttons. Even if parents enjoy the momentary peace that comes with handing a small child a gadget to play with, parents secretly worry that this screen time is damaging their brains. But it appears that screens can be beneficial to learning - and the more interactive the experience the better. Designing the Reactive Playground. Earlychildhood NEWS - Article Reading Center. Look around. 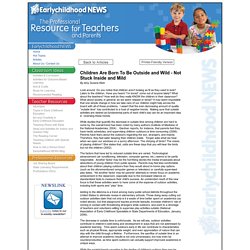 Do you notice that children aren’t looking as fit as they used to look? Listen to the children. Have you heard “I’m bored” come out of anyone lately? What about the teachers? How well do they really KNOW the children in their classroom? While studies that quantify the decrease in outside time among children are hard to come by, the overall trend has been noted by many authors (Institute of Medicine of the National Academies, 2004) .

The factors that have led to reduced outside time are varied. The decrease in outside time is unfortunate. While the societal trends causative to the decline of children’s outdoor time may be irreversible, the good news is that, having recognized the impact of decreasing outside time and its negative consequences, we can do something about it. Overweight children have problems that go beyond physical appearances. 1. Appreciation of Nature and Stress ReductionTaking the time to appreciate nature is becoming replaced with other activities. 1. Viewcontent. Australia's most high tech playground is in western Sydney - Plough and Harrow playground. Goodbye Traditional Playgrounds. Hello Neos 360 PKG.