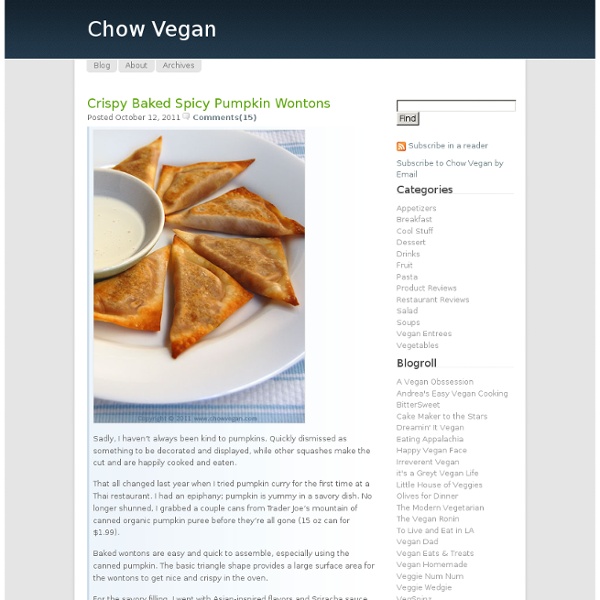 Sadly, I haven’t always been kind to pumpkins. Quickly dismissed as something to be decorated and displayed, while other squashes make the cut and are happily cooked and eaten. That all changed last year when I tried pumpkin curry for the first time at a Thai restaurant. I had an epiphany; pumpkin is yummy in a savory dish. No longer shunned, I grabbed a couple cans from Trader Joe’s mountain of canned organic pumpkin puree before they’re all gone (15 oz can for $1.99). Baked wontons are easy and quick to assemble, especially using the canned pumpkin. For the savory filling, I went with Asian-inspired flavors and Sriracha sauce for its fiery kick. Crispy Baked Spicy Pumpkin WontonsMakes about 24 wontons 24 wonton wrappers 1/2 of a 15 oz can pumpkin puree 3/4″ piece of fresh ginger, minced 1 green onion stalk, finely chopped 1 teaspoon soy sauce Salt and pepper to taste Sriracha hot chili sauce to taste Olive oil 1 package Tofutti cream cheese non-hydrogenated plain

cauliflower and roasted garbanzo “rice + peas” Would you cross a moat for a meager handful of chives? I kind of did that a couple times this week. There’s only one green and edible thing out back right now and even though some heavy rain made for a solid foot of water between me and the goods (and even though there was a fridge full of totally passable fare), I had to have those little emerald green blades. They were certain proof that the world was at work once again, all despite the lump of icy grey grit-snow in the shadiest part of the yard, just uglying it all up. So I’ve been throwing the wellies on and going out to the spot under the old apple tree to get my spring-y fill.

dukkah spiced yogurt dip I recently contributed this dukkah recipe to Food 52’s Small Batch series. When they first suggested it, I had to look up how to (authentically) make it. It turns out — there’s no one way. The word dukkah literally means “to pound” and it generally consists of hazelnuts, sesame seeds and a few whole dried spices. To me, this was the perfect opportunity to use up the nuts and spices I had just cleaned out of my pantry shelves. (Specifically, the ones that didn’t fit when I transferred them from little bags to little jars).

avocado tartare with roasted beets, basil + dukkah The last week or so has been a sent-from-the-universe-and-thank-goodness reminder that everyone’s fighting a tough battle if you listen or look hard enough–or even if you just listen and look on a basic level of human awareness. I’ve been pulling back on the online life a bit as a call to action/but also possibly just as a natural reaction to it all. Ever try that? Just kind of having a passive involvement in the goings on of the internet, or not even offering recognition to an actual, separate “online life” as it were? Maybe you already have a hunch, but it’s been good. A mindful retreat to the physical world makes for a reinforced sense of warmth and closeness ’round here.

Silverdollar Socca Recipe Happy Monday all. I thought I'd give you a glimpse of what things look like on this end right now. We did a shop update yesterday morning. Meaning, there has been a scramble behind the scenes - box building, pre-wrapping, description writing, shooting photos. Salad Rolls Recipe : Directions Place rice noodles in a large pot of boiling water, stir. Add shrimp. Cook until noodles are al dente and shrimp is just cooked, about 1 1/2 to 2 minutes. Vegetarian Butternut Squash Pizza nutritional information Serves 6 Yoga teacher and food blogger (theyogickitchen.blogspot.com) Candice Garrett came up with this recipe thanks to an abundance of butternut squash. “My family and I tried them in a host of recipes; the all-around favorite turned out to be pizza,” Garrett reports.

charred corn crepes For the last three summers, I have had “fresh corn crepes” on my cooking wish list. I was mesmerized by the idea of mixing roughly chopped kernels of the ridiculously sweet bi-color corn we get around here with eggs, milk, some melted butter and salt and cooking them thin and lacy in a pan. What I didn’t have was a clue of what I’d do with them, you know, besides just eating them. Whenever I thought about them, I fell down a culinary philosophical rabbit hole — Why not just put corn on a plain crepe?

Avocado Coconut Oil Tartine Recipe One of the reasons I prefer open-faced tartine sandwiches to other styles, is the bread ratio. While I love good bread, and wholeheartedly embrace the idea of it alongside all manner of slices and slathers, two thick slabs isn't typically what I crave. Tina and I were in the kitchen on Friday prepping a few salads for this little guy's fifth(!)