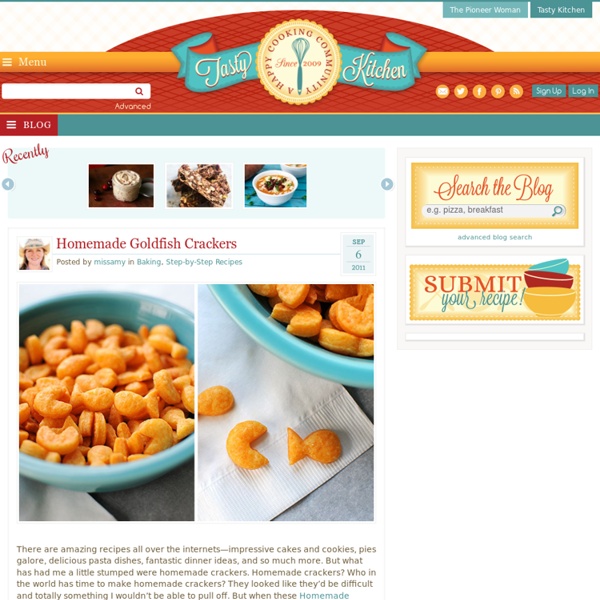 There are amazing recipes all over the internets—impressive cakes and cookies, pies galore, delicious pasta dishes, fantastic dinner ideas, and so much more. But what has had me a little stumped were homemade crackers. Homemade crackers? Who in the world has time to make homemade crackers? They looked like they’d be difficult and totally something I wouldn’t be able to pull off. But when these Homemade Goldfish Crackers from Erin popped up here on Tasty Kitchen, I decided to try my hand at them. Let me tell ya, they were pretty darn easy. Wanna see how? Before getting started, decide on what shapes you’ll be cutting out. I had so much fun I couldn’t stop, and made a Pac-Man and a football. You’ll need just a few simple ingredients: shredded cheese, butter, flour, salt and cold water. Begin combining everything, except the water, in a food processor until the dough looks like sand. Next, pulse in the water, 1 tablespoon at a time, until combined. Once chilled, roll out the dough. Look!

Born to Spend (or Save): It’s All in Your Genes Now I get it. We can’t help ourselves. When it comes to spending and saving, we are genetically wired to be what we are, and there isn’t a lot anyone can do about it, according to a study by Stephan Siegel at the University of Washington and Henrik Cronqvist at Claremont McKenna College. The two scholars looked at the money habits of 15,000 sets of Swedish twins and found the same patterns in even those who had lost contact with one another.

homeroad: Chicken Wire Screen I'm attempting to restyle the room divider screen I have in my kitchen. It matched the old kitchen wallpaper and since I just tore down all the old wallpaper, I thought I'd do something new and creative with the screen. The fact that the inserts in the screen were c ardboard made it a little easier... A few punches and I was through... Now...

Monkey Brain Control: The Future of Robotic Prostheses? File this under “the future is now:” in a series of experiments at Duke University Medical Center, researchers fitted two monkeys with electrodes in their brains and trained them to move a virtual arm across a computer screen to grab virtual objects and “feel” their different textures — all using only their brains. It’s the first demonstration of what the researchers call a brain-machine-brain interface (BMBI). The potential is obviously enormous. The technology could help people with paralysis control prosthetic limbs just by thinking about it and even experience intuitive, tactile sensations. “Someday in the near future, quadriplegic patients will take advantage of this technology not only to move their arms and hands and to walk again, but also to sense the texture of objects placed in their hands, or experience the nuances of the terrain on which they stroll with the help of a wearable robotic exoskeleton,” said the study’s lead researcher, Dr.

How to Make a Decorative Folding Screen Using BiFold Doors I have an obsession with DIY decorating, but one decorating item in particular truly excites me when I choose items for a room. It is an item that is so useful and versatile when decorating a home that no home should be without one. It can be easily found at furniture stores as well as yard sales, thrift stores, and best of all it is very easy to make one on your own. My decorating obsession – the decorative folding screen.

Researchers Advance Cloning Of Human Embryos Researchers in New York are reporting an advance in creating cloned human embryos. The embryos would not be used for reproduction, but rather for the creation of embryonic stem cells. Many scientists believe that human embryonic stem cells made this way could revolutionize medicine. The advantage of stem cells made this way is that they could be personalized to an individual. Think of it this way: Let's say you know you're going in for surgery in a few months to have your hip replaced.

8 Great Backyard Movie Tips mmmm. Summer evenings are my favorite. I am always looking for a good excuse to be outside when the sun goes down—s’mores, stargazing, or of course, the quintessential backyard movie night. As the wife of a film fanatic and former Circuit City salesman (I used to visit Brent at work in college and admire him in his pinkish-maroon Circuit City shirt), I have been required come to appreciate a great backyard set up. So here, with the combined efforts of my techie husband and untechie self, are a few of the tips we’ve learned. Physics Nobel: Why Einstein Was Wrong About Being Wrong The research that leads to a Nobel Prize in physics can sometimes be a little obscure. In 1990, for example, three scientists got the nod "for their pioneering investigations concerning deep inelastic scattering of electrons on protons and bound neutrons." Got that? The next year, the prize went to a scientist "for discovering that methods developed for studying order phenomena in simple systems can be generalized to more complex forms of matter."

How To Make a Simple Tree House Apartment Therapy Tutorials With the arrival of Spring, I decided it was time to bust out and build a tree house for Ursula, which I'd never done before. I remember having one as a kid and loving it. I wanted one that I could build in a day, wouldn't be too high up so as to worry me or other parents, and which was SIMPLE in design to maximize playtime and allow for adding on later. Richard Renaldi Photo Series Strangers Touching Walking the streets of New York City, photographer Richard Renaldi felt fascinated by large groups of strangers and how they seemed to relate and interact with one another. In his ongoing series, Touching Strangers, Renaldi explores this relationship by pairing unacquainted individuals for a portrait with one stipulation: the subjects must physically interact in some manner. “I think it reveals a lot about body language,” says Renaldi.

DIY Patio Table with Built-in Beer/Wine Coolers - Domesticated Engineer  Really, what is better than a patio table with a built in cooler! Who really wants to get up to get another beer? Almost everyone has seen this picture of the wine cooler patio table ether on Pinterest or Reddit. This picture was taken at Medlock Ames’ tasting room.

Articles of Faith: Is Obama Really Losing His Jewish Support? Tell me where you’ve heard this before: Jewish voters are unhappy with Barack Obama. He’s seen as insufficiently supportive of Israel. There are questions about whether he can win enough Jewish votes to carry key states. If you guessed “during the 2008 Democratic primaries,” then ding, ding, ding! A loaf of raisin-studded challah for you! Yes, the same concerns that political observers and commentators are raising now about Obama’s relationship with the American Jewish community dogged him as well in his race against Hillary Clinton for the Democratic nomination.

Garden Games A patio floor does double duty as a Scrabble board. E. Spencer Toy Boos Heard At GOP Debate After Gay Soldier Asks About 'Don't Ask' : The Two-Way Hill: "In 2010, when I was deployed to Iraq, I had to lie about who I was, because I'm a gay soldier, and I didn't want to lose my job. "My question is, under one of your presidencies, do you intend to circumvent the progress that's been made for gay and lesbian soldiers in the military?" Santorum: "Yeah, I — I would say, any type of sexual activity has absolutely no place in the military. And the fact that they're making a point to include it as a provision within the military that we are going to recognize a group of people and give them a special privilege to — to — and removing 'don't ask/don't tell' I think tries to inject social policy into the military. And the military's job is to do one thing, and that is to defend our country.