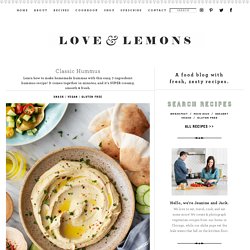 While I’ve posted many hummus variations here on the blog and even more variations in my first cookbook, I’ve recently gotten requests for my go-to classic homemade hummus recipe. Even though I think it’s fun to mix veggies into all kinds of chickpea dips, this is the hummus recipe I make when I’m craving that classic tahini-forward, ultra-creamy, smooth dip, just like the kind I enjoy at a good Middle Eastern restaurant. It’s simple to make – with just 5 minutes of prep, 7 basic ingredients transform into a delicious homemade hummus. Curried Red Lentil Dip Recipe. You know how much I love chickpeas, and you know how much I love hummus, but today I’m going out of my chickpea comfort zone with this red lentil hummus-like dip. 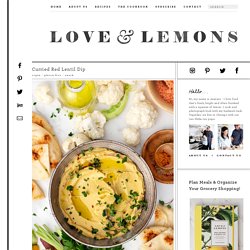 It’s creamy, it’s tangy, and it’s nicely spiced with turmeric and other curry-type spices, because sometimes you run out of chickpeas but you still want a dippable snack. We’ve been enjoying this with veggies, naan, crackers… I’ve also been caught sneaking spoonfuls straight from the fridge. The first time I made this, I tried it in a food processor, but I was able to get it much creamier in a blender. See up there?

Avocado Peach Summer Rolls with Coconut Basil Sauce Recipe. This post is inspired by all of the fresh herbs that we have growing on our little deck. 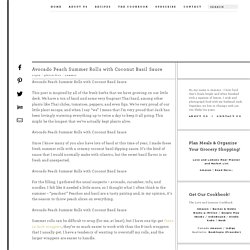 We have a ton of basil and some very fragrant Thai basil, among other plants like Thai chiles, tomatoes, peppers, and even figs. We’re very proud of our little plant escape, and when I say “we” I mean that I’m very proud that Jack has been lovingly watering everything up to twice a day to keep it all going. This might be the longest that we’ve actually kept plants alive. 101cookbooks. Tofu Veggie Summer Rolls with Spicy Almond Butter Sauce. This blog post is in collaboration with iHerb but all opinions are my own. 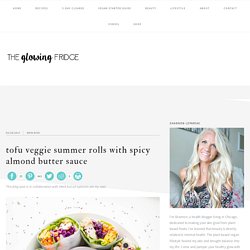 Summer rolls have a special place in my heart. When thinking back to my early blogging days, I often hesitated with what I was writing and putting out into the world. Maybe other bloggers can relate, but hitting ‘publish’ on a new post provides a varying rush of adrenaline, depending on how controversial or personal the post may be. Sweet Potato Avocado Tartare Recipe - Love and Lemons. Super Easy Hot Pepper Jelly. Turmeric Cashews Recipe. Some fascinating emails have come through my in-box over the past decade. 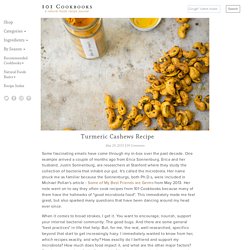 One example arrived a couple of months ago from Erica Sonnenburg. Erica and her husband, Justin Sonnenburg, are researchers at Stanford where they study the collection of bacteria that inhabit our gut. It's called the microbiota. Her name struck me as familiar because the Sonnenburgs, both Ph.D.s, were included in Michael Pollan's article - Some of My Best Friends are Germs from May 2013. Her note went on to say they often cook recipes from 101 Cookbooks because many of them have the hallmarks of "good microbiota food". So fresh: papaya salad rolls. Pin it! 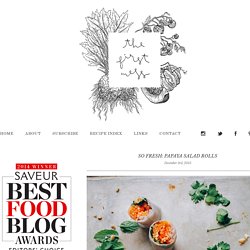 Pin it! I handed in my cookbook manuscript the other day and totally crashed afterward. I thought it would be this moment fraught with emotion and triumph, but really I just wanted a shower and a nap. Not a celebratory drink in sight! Also, truth bomb: the month leading up to my due date saw more pizza nights than you might expect from the future author of a higher vibrational frequency cookbook. Vegan Creamy Cashew Cheese. Nutritional information Makes 16 oz. 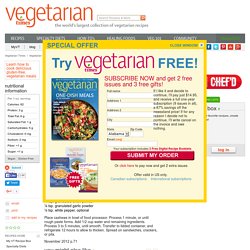 This is great on its own and can be flavored to your tastes. Try blending in 1/2 cup chopped parsley and chives; 2 Tbs. diced chipotles in adobo sauce; or 2 tsp. dried herbs (oregano, basil, tarragon) in the food processor after the base mixture has been processed smooth. 2 cups raw unsalted cashews, soaked 12–24 hours, and drained 2 Tbs. nutritional yeast 1 Tbs. lemon juice 2 tsp. white balsamic vinegar ¼ tsp. granulated onion powder ⅛ tsp. granulated garlic powder ⅛ tsp. white pepper, optional Place cashews in bowl of food processor. Moroccan-Spiced Carrot Hummus — Snack Recipes from The Kitchn. This hummus is so addicting, both in flavor and in color — bright orange! 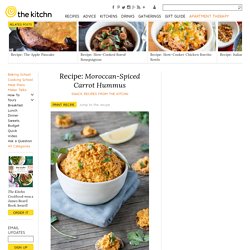 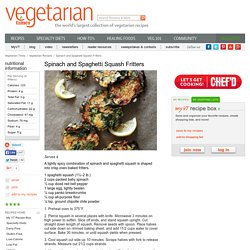 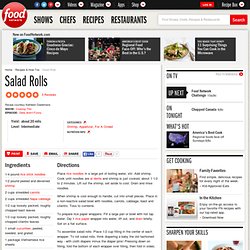 Add shrimp. Cook until noodles are al dente and shrimp is just cooked, about 1 1/2 to 2 minutes. Lift out the shrimp, set aside to cool. Drain and rinse noodles. When shrimp is cool enough to handle, cut into small pieces. To prepare rice paper wrappers: Fill a large pan or bowl with hot tap water. To assemble salad rolls: Place 1/2 cup filling in the center of each wrapper. To serve, cut rolls crosswise in 1/2; stand pieces upright. Ginger Lime Dipping Sauce: Guacamole with Pear and Pomegranate Seeds Recipe. Squash Cakes [Vegan] Crispy Baked Spicy Pumpkin Wontons. Sadly, I haven’t always been kind to pumpkins. Quickly dismissed as something to be decorated and displayed, while other squashes make the cut and are happily cooked and eaten.

That all changed last year when I tried pumpkin curry for the first time at a Thai restaurant. I had an epiphany; pumpkin is yummy in a savory dish. No longer shunned, I grabbed a couple cans from Trader Joe’s mountain of canned organic pumpkin puree before they’re all gone (15 oz can for $1.99). Baked wontons are easy and quick to assemble, especially using the canned pumpkin. White Bean–Artichoke Hummus with Roasted Garlic Recipe. Nutritional information Makes 3 cups This mellow spread gets a hit of bright color and citrusy flavor from ground sumac. The Middle Eastern spice may seem strange paired with hard cider, but in fact, sumac grows wild all over the temperate areas of North America, and the bright red berries ripen at the same time as the apple harvest. Serve with raw veggies, pita crisps, or crackers.