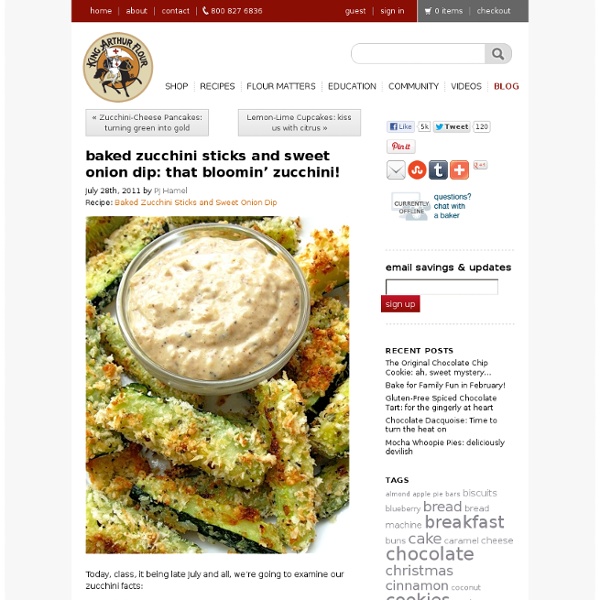 Today, class, it being late July and all, we’re going to examine our zucchini facts: •Zucchini is always at the end of any A-to-Z food list; •Zucchini and fruitcake are the undeserving targets of many a joke; •The zucchini plant literally grows like a weed, making it absolutely ubiquitous in vegetable gardens across America; •And for that reason, enterprising cooks have discovered ways to turn it into muffins, and cake, and pancakes, and… Baked Zucchini Sticks. You know that onion appetizer that came into bloom back in the late ’80s? Outback Steakhouse claims it invented the “Bloomin’ Onion” back in 1988, and it wasn’t long before quasi-fast food restaurants adopted it as the hottest appetizer since artichoke dip baked in a bread bowl. These zucchini sticks, with their melty-soft interior and crisp crust, are reminiscent of those onions – and equally addictive, especially when served with their special onion-mustard dip. Ready to go beyond muffins, bread, kebabs, and frittata? Warning!

Spinach and Goat Cheese Tartlets Recipe : Directions Preheat the oven to 350 degrees. Melt 1 tablespoon butter. Place 1 phyllo sheet on a clean surface (cover the other sheets with a damp towel), brush with melted butter and sprinkle with 1 teaspoon parmesan. Cover with another phyllo sheet, brush with more butter and sprinkle with another teaspoon parmesan. Chocolate Truffle S’more Tarts Do not adjust your screens. That is indeed the correct name of this dessert. Remember when I was on Facebook telling you all about the s’more-fest I was having in my kitchen? Well, this is one of the recipes I made.

Chocolate Quake Cake Maybe this blog should be renamed "Sprinkle Bakes Chocolate Cakes". I've had a serious romance with the confection all year. First there was a very special chocolate cupcake recipe for pyromaniacs, soon after came Chocolate Whiskey Cake, then Chocolate Gâteau on the Half Shell, Nigella's Chocolate-Honey Cake, the proportionally epicPBC4 (as I've come to call it), and last week's post was dedicated to the marriage of chocolate cake and red wine. I may need an intervention, but like most addicts I don't want one. I've tasted many, but this chocolate cake may be my favorite, ever!

Baked Wonton Tacos When I was a little kid, around every New Year’s, my mom and grandma would sit down and make Mandu {Korean version of potstickers or wontons} all day to make Teokguk {Korean version of wonton soup} and I’d just sit with them trying to help out. I remember trying to help out making my own Mandu, though not really successfully. Then my mom and grandma made their own mandu skins from scratch… And now… how grateful I am that I can get premade mandu skins so easily… although I think I should try and make my own skins sometime… It’s definitely on my to-do list. But until then, these premade wonton skins would do. I’ve been looking for ways to use these little yummies in different kinds of cooking. I’ve always used wonton skins for just wontons… Then I saw that you can use wonton skins for ravioli… So I thought there must be other ways to use the skins, too.

Crusty Bread Jan. 1, 2015: Just released. Instructional video for the Crusty Bread recipe. Crusty Bread 3 cups unbleached all purpose flour 1 3/4 teaspoons Kosher salt 1/2 teaspoon Instant or Rapid-rise yeast Three Dishes at Gwynnett St. Welcome to the weekly blog feature formerly known as Five Dishes. We took a week off, and in that time two of the dishes dropped away. Cynics will note that we are delivering less content just as The Times is shutting the window a bit on how many articles readers can see each month without subscribing.

Ultimate Chocolate Chip Cookie n’ Oreo Fudge Brownie Bar On Wednesday, I wondered what would happen if you combined Oreo Stuffed Chocolate Chip Cookies with Oreo Stuffed Brownies. On Thursday I found out. And on Friday… I had this. Zucchini Noodles with Pesto This dish is a play on pesto spaghetti! I used a spirooli to make thin zucchini noodles and tossed it in a creamy pesto sauce. Pesto is usually made exclusively from pine nuts but holy cow they were really expensive at my local store! so I only managed to use part pine nut and added cashews as their poorer alternative. Preparation time: 20mins (plus standing time for noodles)Serves 2

French Garlic Soup Home >> Recipes Simple and healthy garlic soup from the Provence. I found this healthy French garlic soup in the Larousse de la cuisine des familles, presented as a family recipe from a Provence mama. Lasagna Cups I have to tell you guys, I had a lot of fun with this recipe! I had a blast making these with my niece and turning this idea into dinner the other day. Who doesn’t love a pasta cup filled with delicious sauce and ooey gooey cheese? I think I could say that EVERYONE falls under this category.

Garlic Pork Potstickers I’d love to have the job of writing pithy prognostications for Fortune Cookies, except that I’d probably have to make the cookie too, and since I don’t actually like the cookie, it’s not a career soon to happen. As doughs go, however, the Chinese Jiǎozi, informally known as The Potsticker, surely ranks among the world’s tastiest and its potential fillings are as varied as they are with Italy’s Ravioli. The Korean version is known as Mandu, the Japanese as Gyōza, the Nepali as Momo, the Russian as Pelymeni, the Polish as Pirogy, and so on to every corner of the world. So many little dough packets filled with so many regional ingredients are a global staple. Pick a protein and a fresh herb and set aside an afternoon for the Zen-like assembly of many dozens of Potstickers.

Red Velvet Brownies With Cream Cheese Icing We always find ourselves buying cookies when visiting the mall. I noticed a Red Velvet Brownie in the window after we ordered a few weeks ago and decided it looked incredibly easy to duplicate. I didn't try the one at the store, but knew it was absolutely delicious because it combines three of my favorite things-Brownies, Red Velvet, and Cream Cheese! This is what I came up with-next time I might only use half of the box of Red Velvet Cake and save the other half for cake pops. :) I know it doesn't look like the bottom part is done, but it is-I used a fudge-like brownie mix and added even more chocolate chips to make it gooey.

Homemade French Fries « Naturally Ella Why there is no need to purchase pre-made fries in the freezer aisle – in pictures and rhyme: One potato (find a potato) Two potato (cut the ends off) Three potato (cut slices) Four (cut fries from slices) 100 Greatest Cooking Tips (of all time!) 1. Remember, y'all, it’s all about the prep. Take away the stress by doing the prep the night or day before. You'll look like a star.Paula Deen Paula’s Best Dishes