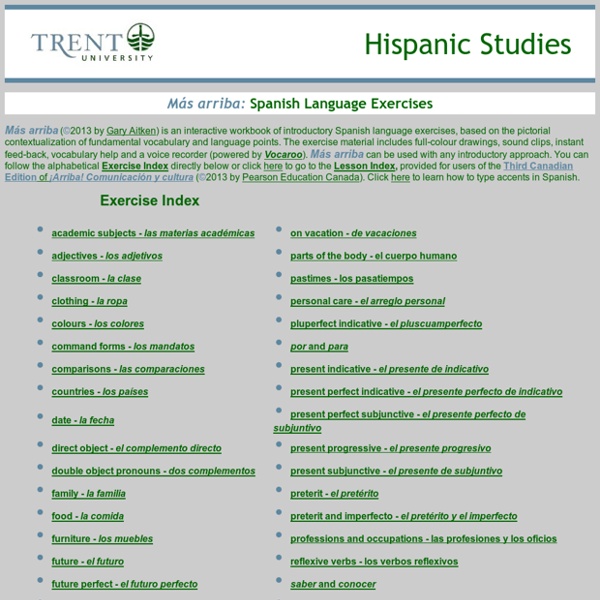 Más arriba (©2013 by Gary Aitken) is an interactive workbook of introductory Spanish language exercises, based on the pictorial contextualization of fundamental vocabulary and language points. The exercise material includes full-colour drawings, sound clips, instant feed-back, vocabulary help and a voice recorder (powered by Vocaroo). Más arriba can be used with any introductory approach. You can follow the alphabetical Exercise Index directly below or click here to go to the Lesson Index, provided for users of the Third Canadian Edition of ¡Arriba! Comunicación y cultura (©2013 by Pearson Education Canada). Click here to learn how to type accents in Spanish.

President Obama: Daughter Malia's Spanish 'Is Much Better Than Mine' President Barack Obama may be the leader of the free world, but he's relying on his daughter Malia as his personal interpreter during his historic trip to Cuba. Malia was captured translating Spanish for her father on Sunday night in a photo that's since gone viral. "You know, her Spanish is much better than mine," Obama said in an exclusive interview with ABC News' David Muir. "And I'm hoping that she has a chance to get entirely fluent." Malia and Sasha Obama are spending their spring break with the president and first lady as they visit Cuba and Argentina.

Weather Expressions Home / Grammar / Topic Notes: The written lesson is below.Links to quizzes, tests, etc. are to the left. Remember, an idiom is an expression that cannot be immediately understood by analyzing its literal meaning. A few examples of idioms in English are: to "drive someone crazy" to "lose it" to be "raining cats and dogs" Languages Online Sorry, we could not find the page you requested because: we may have moved or deleted the file you may have mis-typed the web address a link from another site may have been incorrect a search engine listing may be out of date Please try the following: Enter keywords related to the page you’re looking for into the search box Use the navigation to browse for information on your chosen topic Visit our home page to find out more about our site structure to work out where your information is located. See: The Department of Education and Training

The 74 is getting into Spanish-language education reporting, starting in Los Angeles The small Los Angeles-based education site LA School Report is relaunching today under the auspices of The 74, alongside a mirror site in Spanish which will attempt to dive further into original Spanish-language education reporting. The 74, an education news site cofounded by former CNN anchor Campbell Brown, had absorbed the four-and-a-half year old LA School Report — which had previously been a tiny but consistent presence in coverage of the Los Angeles Unified School District — in February. “It was a natural fit to have them merge into The 74, as we were looking to ramp up our presence in terms of our West Coast reporting, and we’re already big admirers of the work that LA School Report was doing, really owning that Los Angeles education beat,” Romy Drucker, cofounder and CEO, told me. “This is at a time that Los Angeles was emerging as a leading reform story — a new superintendent, Michelle King, had just taken over. Some controversy has swirled around the takeover.