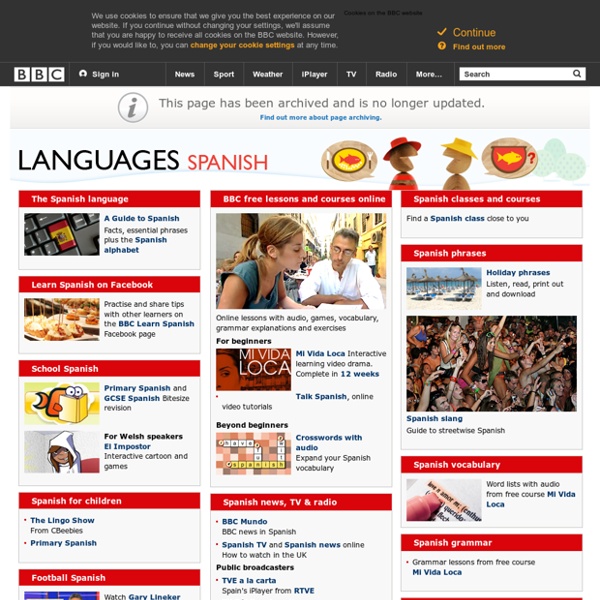 @import '/staticarchive/fa81fb450d419556b29722ee8270c43da933db19.css'; @import '/staticarchive/7ce099eb1cacc32af59884022002b9f87b5f62c5.css'; British Broadcasting Corporation Home Accessibility links This page has been archived and is no longer updated. Find out more about page archiving. The Spanish language A Guide to Spanish Facts, essential phrases plus the Spanish alphabet Learn Spanish on Facebook Practise and share tips with other learners on the BBC Learn Spanish Facebook page School Spanish Primary Spanish and GCSE Spanish Bitesize revision For Welsh speakersEl Impostor Interactive cartoon and games Spanish for children The Lingo Show From CBeebies Primary Spanish Football Spanish Watch Gary Lineker introducing Match of the Day in Spanish and play Count the Coloccinis Test your Spanish Spanish test Are you a complete beginner, quite fluent or somewhere in between? BBC free lessons and courses online Online lessons with audio, games, vocabulary, grammar explanations and exercises For beginners TVPerú

Books about World Religions for Kids This is the second post in a series on World Religions for Kids, a group of articles packed with resources to help teachers and parents teach their children about World Religions as a means to promote compassion, empathy, cultural understanding, and tolerance. These books are a sample of the incredible list of 300+ multicultural books featured in The Global Education Toolkit for Elementary Learners, a new book with hundreds of easy activities, resources, and projects to help busy educators incorporate global and cultural awareness in their classroom. Learn more here. The books contain affiliate links.

La Tomatina – Página oficial ll started the last Wednesday of August in 1945 when some young people spent the time in the town square to attend the Giants and Big-Heads figures parade. The young boys decided to have a place among the retinue of a parade with musician, Giants and Big-Heads figures. The energy of these young people made that one participant fell off. The participant flew into a fit of rage, started to hit everything in his path. There was a market stall of vegetable that fell victim of the furious crowd: people started to pelt each other with tomatoes until the local forces ended that vegetable battle. The following year, the young people picked a quarrel by their own decision and brought the tomatoes from home.

Guide to Hispanic Heritage Long before the arrival of Christopher Columbus and before the incursions of the Spanish explorers and conquistadores in the 15th and 16th centuries, the Americas were home for thousands of years to a variety of civilizations and empires. As the understanding of agriculture improved and larger populations could be supported, small settlements grew into vast urban centres ruled by an aristocracy that was looked to—among other things—for propitiation of the gods. These civilizations waxed and waned (producing calendars and a writing system as well as huge building complexes) according to a natural order until the Spanish conquest. The resultant colonization wrought many changes, notably an overlay of the Spanish language, now the official language of most countries lying south of the United States. Select a link on the left to begin your journey.

Bingo Caller Print and play - run bingo games from the comfort of your home with our simulated Bingo Caller and printable Cards. There's no need for any specialist equipment with our DIY bingo accessories. Play alone, or host a great night in with family and friends. Print cards Choose between 75 and 90 Ball Bingo for the ultimate at-home experience. Select 'Print Cards' under your preference.Customise your cards in the new window. Guidelines for Reading and Analyzing Literature Literature is classified by genre (type or kind). Although critics disagree on how to define and label different genres, the three basic forms of literature are prose, drama, and poetry. Most works we read as literature are imaginative (fictional), but some nonimaginative (nonfictional) works are read as literature as well.