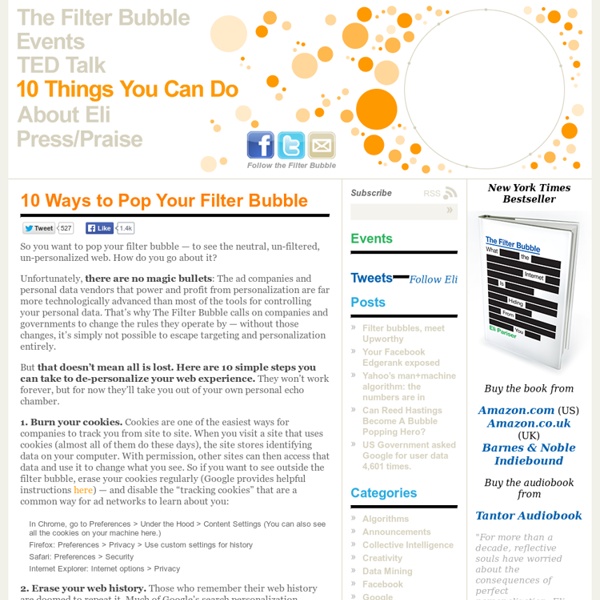 Credibility Check Censorship Exclusive: How Google's Algorithm Rules the Web | Wired Magazine Want to know how Google is about to change your life? Stop by the Ouagadougou conference room on a Thursday morning. It is here, at the Mountain View, California, headquarters of the world’s most powerful Internet company, that a room filled with three dozen engineers, product managers, and executives figure out how to make their search engine even smarter. This year, Google will introduce 550 or so improvements to its fabled algorithm, and each will be determined at a gathering just like this one. The decisions made at the weekly Search Quality Launch Meeting will wind up affecting the results you get when you use Google’s search engine to look for anything — “Samsung SF-755p printer,” “Ed Hardy MySpace layouts,” or maybe even “capital Burkina Faso,” which just happens to share its name with this conference room. Udi Manber, Google’s head of search since 2006, leads the proceedings. You might think that after a solid decade of search-market dominance, Google could relax.

Creativity Lolcats: A Sign of Human Cultural Progress Clay Shirky makes a very compelling argument for why internet memes and the other creative collaborative phenomena of the internet (like Wikipedia) can be seen as an impressive human achievement, and a sign that our society has made a significant leap forward. He draws a distinction between our current cultural setting and that of the pre-internet era, based on the ability of the internet to give us a “media landscape that lets us work collaboratively, cooperatively, cumulatively.” The range of creativity is not limited to the civic-ly valuable actions. But even if we take Lolcats and we stipulate, as the lawyers say, that this is the stupidest possible creative act… the stupidest possible creative act is still a creative act.Doing something is different than doing nothing. The internet as the next distinct stage of human cultural evolution? (via Neatorama.)

Pinterest vs Scoop.It | Tech Talk | Tech Talk Both work the same - neither offer SEO or tags in any way shape or form in order for you to be found on search engines. They are simply only online magazines. Scoop.It charges for upgrading to higher packages (which do not offer true benefits: those benefits should all be coming free directly from your WordPress website/blog), where Pinterest is solely free, even when upgrading to their business accounts. With Scoop.It you "curate content" on a "specific topic" instead of having "many boards and categories" on Pinterest. Thus having Scoop.It helps you maintain your goal of being your local real estate expert rather than being on Pinterest and having many posts scattered across different boards for folks to find and follow. With Pinterest you really only need one board & you can think of it as your "specific topic" and naming it appropriately. So which is better?

Three Reasons Pinterest Is Great, According To David Pogue Legal journalists : Twitter handles must be readily available LexBlog Network (LXBN) Twitter List of Legal Reporters (excerpt) Reporters with the ABA Journal, ALM publications, and the like need to make their Twitter handles readily available. Preferably by displaying them next to their name and email in the byline. I am a veracious reader of news, insight, and information via my news reader. I share on Twitter what I believe helpful to the legal and business communities. Wanting to give credit where credit is due, I attribute the story or post shared to the reporter or blogger. It’s also a nice way to build relationships with reporters and bloggers. And the reporter and blogger to have someone who shares stories they’ve written with their trusted audience. It drives me mad to have to search in Google and Twitter and find nothing for a legal reporter’s Twitter handle. But there are many legal reporters whose Twitter handles I cannot find.

Is your website credible? How C.R.A.P is Your Site Design? Eons ago when I was taking the Freshman web design course in college (okay, it was only 4 years ago) I was taught about the acronym of all acronyms, the one by which all other web design acronyms were judged. We learned that good design is based on the C.R.A.P. principles where C.R.A.P. stands for Contrast Repetition Alignment Proximity, and when Creative Directors tell you that your design is crap, they’re actually giving you positive reinforcement. Okay, that last part was made up, sorry. “Crappy work” is probably not a term of endearment but rather an indication that your pixels smell. There are various examples of what C.R.A.P. means on the web (Robin Williams first coined the acronym), but for me itâ€™s this: Contrast Elements that aren’t the same should be very different so they stand out, making them “slightly different” confuses the user into seeing a relation that doesn’t exist. Contrast This screenshot is a good example of bad contrast on the web. Repetition Alignment Proximity

Are we using our own minds? #.UjvCiqO-3JE The map of the Internet Like any other map, The Internet map is a scheme displaying objects’ relative position; but unlike real maps (e.g. the map of the Earth) or virtual maps (e.g. the map of Mordor), the objects shown on it are not aligned on a surface. Mathematically speaking, The Internet map is a bi-dimensional presentation of links between websites on the Internet. Every site is a circle on the map, and its size is determined by website traffic, the larger the amount of traffic, the bigger the circle. Charges and springs To draw an analogy from classical physics, one may say that websites are electrically charged bodies, while links between them are springs. Also, an analogy can be drawn from quantum physics. Anyway, the real algorithm of plotting The Internet map is quite far from the analogies given above. Semantic web The map of the Internet is a photo shot of the global network as of end of 2011 (however, baloons show actual statistics from Alexa). The Internet Phenomenon

Why We Need "Curators"