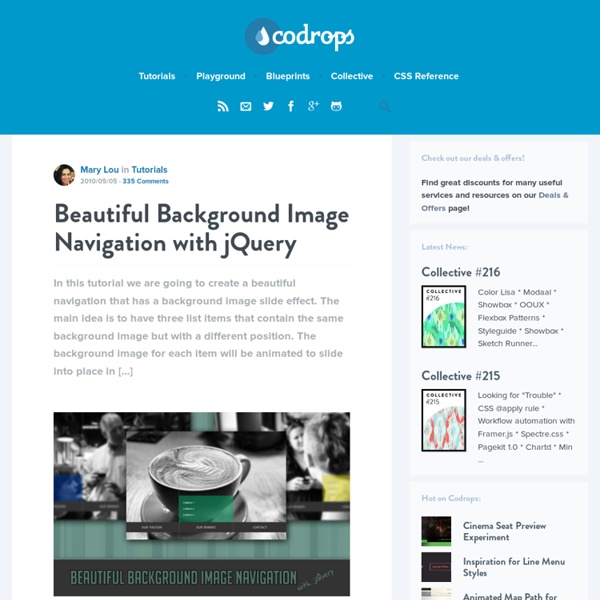 jQuery Panel Gallery 2.0 Released Since it’s been about a year since the Panel Gallery plugin was last updated, I figured that it was overdue for some spiffying up. I’ve completely rewritten the Panel Gallery plugin and added a HUGE amount of new effects. You’re no longer are you limited to just panels to transition your images; now you have a whole slew of different effect to apply, with multiple ways to apply them. View the demos. Version 2.0 (the Super Happy Fun Ball™ edition) has the following transition effects: Fade – A simple total image fadeBox (5 variations) – Transitions by dividing up an image into small squares. You can apply specific effects on any image, create an array of effects, of let the plugin pick effects for you. Version 2.0 still has the ability to pause the transitions simply by placing your mouse over the image. As with previous releases of the Panel Gallery, the best part of this plugin is that not one image needs to be sliced or edited to work with it; the plugin does all the work! Download Demos

jAni – jQuery Plugin for Cartoon-like Background Image Animation (alternative to animated GIF) — ajaxBlender.com Framework: jQuery Listed in: Effects jAni is a simple plugin for jQuery which allows you animate background images. The plugin is basically an alternative to the animated GIF but with several benefits. At first, it’s always better to use an animated GIF as this format is supported by all browsers without any JavaScript code or additional markup, but the “dark side” of it is that an animated GIF allows only 256 colors and you cannot control animation in any way. Light-weight scriptEasy to integrateFully customizable via CSSWorks with all modern browsers 1.) {code type=html} <script type=”text/javascript” src=”.. 3.) 4.) {code type=html} <div id=”animation-1″></div> {/code} 5.) That’s it ;) Click the Demo button to see it in action. jani.play() Start playing animation. jani.pause() Pause animation. jani.stop() Stop animation. The table below contains a list of parameters accepted by the .jani() function.

30 Fresh AJAX Tutorials And Techniques Jan 04 2010 By Paul Andrew Using AJAX on websites and applications is pretty much taken for granted nowadays. Users expect it. They want to be able to edit a page in-place, they want search queries to be auto-suggested, and they want to be able to submit a form without refreshing the page. Why? As great as AJAX is, though, it is not for every website or application. In this round-up, we have collected 30 fresh AJAX tutorials and techniques, covering almost every aspect of AJAX development: forms, applications, polls, editing, parsing, visual effects and much more. AJAX Tutorials And Techniques An AJAX-Based Shopping Cart with PHP, CSS and jQuery In this tutorial, you will create an AJAX-driven shopping cart and store all of the products in a MySQL database, using PHP to process the data. jQuery will deliver the AJAX on the page, and with help of the simpletip plug-in, you will be able to deliver a high-end interactive check-out process.View the demo. About the Author

jQuery Plugins During the past few weeks we’ve been publishing our “Best of 2009″ series in which we’ve shown you the best WordPress themes, fonts, icons, and Photoshop Tutorials. In this article, our focus is on jQuery. Over the past couple of years jQuery has been growing in popularity, which means more and more plugins are being created to make web designers’ lives easier. Here are our favorites from 2009. Content Sliders This year we saw a growing popularity in using content sliders as a way to display several pieces of content within a limited area or to engage the user with the sliding animation. AnythingSlider AnythingSlider is created by Chris Coyier of CSS-Tricks and is a fully featured slider that is widely useful. Easy Slider Easy Slider is a content slider that gives you the the option to choose between classic previous/next navigation or to use a numeric “pagination” style navigation. Coda-Slider 2.0 Image Galleries Galleria Galleria is a javascript image gallery written in jQuery. slideViewer

Making an Interactive Picture with jQuery | Build Internet! In this tutorial I will be showing you how to piece together an interactive picture – aka an image that contains tooltips and popup boxes. This can be useful for showing off a particular aspect of a photo (ie items or people). The original inspiration for this tutorial came from the IKEA website, which uses Flash to accomplish something similar, although admittedly with a few extra features. Tutorial Outline This tutorial will show you how to set up the basic structure for your own interactive picture.Create/Position “more info” buttonsAdd captions to buttonsLink buttons to descriptions in popup info boxes This tutorial will be most effective if used as a guide to customize the downloadable files. Set Up Your Picture Before we can place any buttons, we first have to get the image ready (I’ve chosen a picture of our office) . You will want to customize your dimensions and background image to match your selected image. Positioning Info Buttons The Info Box The HTML for this goes as follows:

5 Fresh and Useful jQuery Plugins Were Born in November 2009 | AEXT.NET jQuery is great and the amount of free extensions is simply amazing! The number of jQuery plugins that were created monthly is very hard to count and to know; And It is not easy to know which one is the nice one. In November 2009, 5 jQuery plugins were born and most of people believed that they are useful for web designers. Enjoy the 5 fresh jQuery plugins! 1. jQSlickWrap jQSlickWrap is a jQuery plugin which enables you to easily and accurately wrap your text around the content of floated images. Usage: It’s as simple as: $('img').slickWrap(); 2. jQuery Slider plugin (Safari style) jQuery Slider is easy to use and multifunctional jQuery plugin. Usage:Available Options: 3. jQuery Shuffle Plugin A jQuery plugin for shuffling a set of elements. Usage: To shuffle a set of elements use: $(selector).shuffle(); or $.shuffle(selector); 4. Plugin for creating sliding boxes, that allows to show more boxes on one place. It allows to show multiple columns/rows together 5.