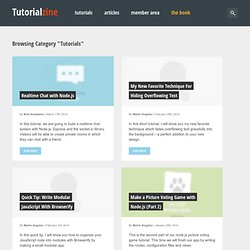 Visitors will be able to create private rooms in which they can chat with a friend. Read more My New Favorite Technique ForHiding Overflowing Text By Martin Angelov | In this short tutorial, I will show you my new favorite technique which fades overflowing text gracefully into the background – a perfect addition to your new design. Hi! I'm trying HARD to be a jQuery Robot. jQuery Easing Plugin. Description A jQuery plugin from GSGD to give advanced easing options.

Please note, the easing function names changed in version 1.2. Please also note, you shouldn't really be hotlinking the script from this site, if you're after a CDN version you could do worse than try cdnjs.com Download Download the following: Example Click on any of the yellow headers to see the default easing method in action (I've set as easeOutBounce for the demo, just because it's obviously different). Select easing types for the demo first one for down, second one for up.

Animated Navigation w/ jQuery & CSS. Nivo Slider - The Most Awesome jQuery Image Slider. jQuery & WordPress Image Slider The Nivo Slider is world renowned as the most beautiful and easy to use slider on the market. 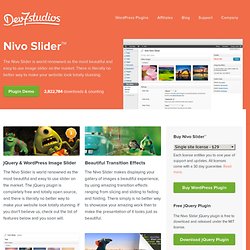 The jQuery plugin is completely free and totally open source, and there is literally no better way to make your website look totally stunning. If you don’t believe us, check out the list of features below and you soon will. Beautiful Transition Effects The Nivo Slider makes displaying your gallery of images a beautiful experience, by using amazing transition effects ranging from slicing and sliding to fading and folding. Simple and Flexible Setup. Start/Stop Slider. A little while back I did a tutorial on a Featured Content Slider. 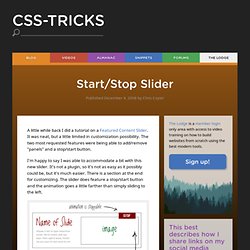 It was neat, but a little limited in customization possibility. The two most requested features were being able to add/remove "panels" and a stop/start button. I'm happy to say I was able to accommodate a bit with this new slider. It's not a plugin, so it's not as easy as it possibly could be, but it's much easier. There is a section at the end for customizing. The HTML Markup. jQuery Accordion Tutorial - Simple Accordion Tutorial - jQuery Accordion Menu. UI/API/1.8/Accordion. Description: Convert a pair of headers and content panels into an accordion.

The markup of your accordion container needs pairs of headers and content panels: Accordions support arbitrary markup, but each content panel must always be the next sibling after its associated header. See the header option for information on how to use custom markup structures. The panels can be activated programmatically by setting the active option. Keyboard interaction When focus is on a header, the following key commands are available: UP/LEFT - Move focus to the previous header. When focus is in a panel: CTRL+UP: Move focus to associated header. Theming. Awesome Bubble Navigation with jQuery. In this tutorial we are going to create a bubbly navigation with jQuery. 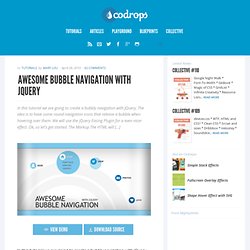 The idea is to have some round navigation icons that release a bubble when hovering over them. We will use the jQuery Easing Plugin for a even nicer effect. Ok, so let’s get started. How To Create a Cool Animated Menu with jQuery. In this tutorial we’ll be building a cool navigation list complete with a sliding hover effect. 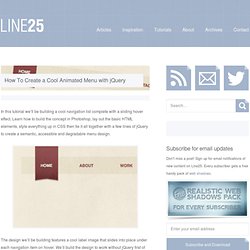 Learn how to build the concept in Photoshop, lay out the basic HTML elements, style everything up in CSS then tie it all together with a few lines of jQuery to create a semantic, accessible and degradable menu design. The design we’ll be building features a cool label image that slides into place under each navigation item on hover. We’ll build the design to work without jQuery first of all to ensure it’s widely accessible to users without Javascript enabled, then enhance the effect with jQuery for the majority of users. View the animated menu demo Create a new document and fill the background with a light beige. Use a subtle grunge Photoshop brush to add a little extra texture to the top centre of the canvas.

Draw and fill a rectangle to create the base of the label graphic. 40+ jQuery Plugins Improving Your Website Look and Feel. Making more and more appealing and interactive user interfaces have been one of the never ending competitions between web designers since html and browsers where in the mid nineties.

The competition is there for a reason. The number of website on-line has experienced a nearly exponential growth and you need to stand out to be seen! Actually it is kind if scary if this trend is going to continue… Anyway most of you reading this post is probably agreeing that websites need to be special, look good and have features that is not found everywhere. I believe jQuery is the answer today just as Flash was 5 years ago. With simple steps and limited programmer skills jQuery will allow you to add goodies to your website you wouldn’t even allow yourself to dream about!