Jquery - Display Twitter feed with a JSON file. 16 Useful jQuery Plugins & Tutorials to Integrate Twitter into Website/Blog. Twitter is one of the most popular and prevailed social network all over the world for communication and discussions online.

Using jQuery plugins is a great tool for the mission of integrating Twitter to a bog or website. A Twitter List Powered Fan Page Recently, Twitter rolled out a great new feature on their site – lists. Our Favorite jQuery Plugins and Libraries For Spring 2015. Nick Anastasov Web development is hard and there is much to learn.

Developers and designers need to be on top of a lot of emerging technologies and trends. But the community is buzzing with activity and it creates awesome libraries and plugins that can help us do our work. Here are some of our favorites. Not all of them were released this year, but all of them were updated in the last few months and are a great addition to your bookmarks. 1. Animsition is a simple and easy jQuery plugin for CSS animated page transitions. Animsition 2. Waves is a plugin that recreates the on-click ink effect as seen in Google’s Material Design. Waves 3. This is an interesting library which allows you to scroll a web page by tilting your smartphone. Interdimensional. Twitter Post Fetcher - compiled. Twitter Post Fetcher - Cube Demo. Twitter API 1.1 JavaScript only solution.

By Jason Mayes Why does this exist? 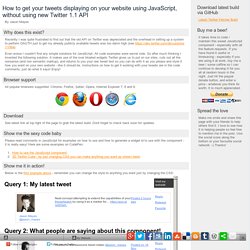 Recently I was quite frustrated to find out that the old API on Twitter was depreciated and the overhead in setting up a system to perform OAUTH just to get my already publicly available tweets was too damn high (see Even worse I couldn't find any simple solutions for JavaScript. All code examples were server side. So after much thinking I invented the following solution. Browser support All popular browsers supported. Download See latest link at top right of the page to grab the latest build. Show me the sexy code baby Please read comments in JavaScript for examples on how to use and how to generate a widget id to use with the component - it is really easy! Show me it in action! Below is the first example above - remember you can change the style to anything you want just by changing the CSS: Change log UPDATE 1: First version released!

Got suggestions? Disclaimer. Easy Twitter Feeds with JavaScript - DEZZAIN.COM. Last year i’ve posted an articles on how to use new Twitter API 1.1. 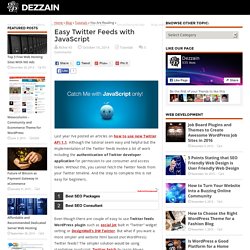 Although the tutorial seem easy and helpful but the implementation of the Twitter feeds involve a lot of work including the authentication of Twitter developer application for permission to use consumer and access token. Without this, you cannot fetch the Twitter feeds from your Twitter timeline. And the step to complete this is not easy for beginners. Even though there are couple of easy to use Twitter feeds WordPress plugin such as social jet built in “Twitter” widget setting or DesignWall’s DW Twitter. 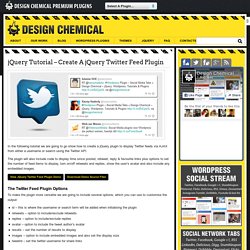