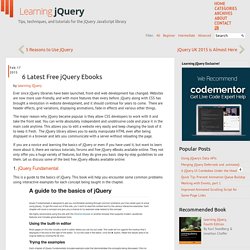 Websites are now more user-friendly, and with more features than every before. jQuery along with CSS has brought a revolution in website development, and it should continue for years to come. There are header effects, grid variations, displaying animations, fade-in effects and various other things. The major reason why jQuery became popular is they allow CSS developers to work with it and take the front seat. You can write absolutely independent and unobtrusive code and place it in the main code anytime. This allows you to edit a website very easily and keep changing the look of it to keep it fresh. If you are a novice and learning the basics of jQuery or even if you have used it, but want to learn more about it, there are various tutorials, forums and free jQuery eBooks available online.

Setting the value of a datetime-local input with JavaScript. While they haven’t gained much traction on the desktop, HTML5’s new input types are great when you’re developing for mobile. 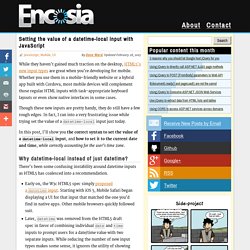 Whether you use them in a mobile-friendly website or a hybrid app built with Cordova, most mobile devices will complement those regular HTML inputs with task-appropriate keyboard layouts or even show native interfaces in some cases. Though these new inputs are pretty handy, they do still have a few rough edges. In fact, I ran into a very frustrating issue while trying set the value of a datetime-local input just today. In this post, I’ll show you the correct syntax to set the value of a datetime-local input, and how to set it to the current date and time, while correctly accounting for the user’s time zone.

Why datetime-local instead of just datetime? Determine where an element belongs in a jQuery selection. Using jQuery to find a specific element in a selection is straightforward — probably one of the earliest things most of us used jQuery to help with, whether using :first, :last, :eq(), or maybe :odd/:even. 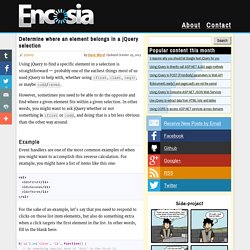 However, sometimes you need to be able to do the opposite and find where a given element fits within a given selection. In other words, you might want to ask jQuery whether or not something is :first or :odd, and doing that is a bit less obvious than the other way around. Example Event handlers are one of the most common examples of when you might want to accomplish this reverse calculation.

Button click handlers, AJAX, and premature submission. When you begin moving from server-side web development to a client-side approach to driving your user interfaces, a common first experiment is to enhance an existing button with some JavaScript that runs when the button is clicked. 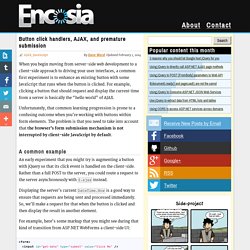 For example, clicking a button that should request and display the current time from a server is basically the “hello world” of AJAX. Unfortunately, that common learning progression is prone to a confusing outcome when you’re working with buttons within form elements. The problem is that you need to take into account that the browser’s form submission mechanism is not interrupted by client-side JavaScript by default. Visibility: hidden vs. Display: none - Tallan's Technology Blog. During a recent project I kept coming up against strange issues with layout. 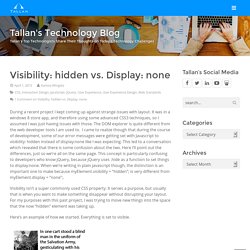 It was in a windows 8 store app, and therefore using some advanced CSS3 techniques, so I assumed I was just having issues with those. The DOM explorer is quite different from the web developer tools I am used to. I came to realize though that during the course of development, some of our error messages were getting set with Javascript to visibility: hidden instead of display:none like I was expecting. jQuery Part 3: Advanced jQuery - Tallan's Technology Blog. Introduction Welcome to the third and final installment of the jQuery saga. 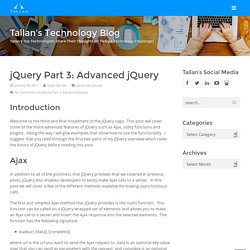 This post will cover some of the more advanced features of jQuery such as Ajax, utility functions and plugins. Along the way I will give examples that show how to use the functionality. I suggest that you read through the first two parts of my jQuery overview which cover the basics of jQuery before reading this post. jQuery Part 2: More jQuery Basics - Tallan's Technology Blog. Introduction Welcome to the second part of my overview of jQuery. 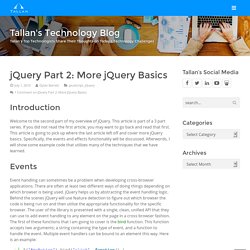 This article is part of a 3 part series. If you did not read the first article, you may want to go back and read that first. jQuery Part 1: jQuery Basics - Tallan's Technology Blog. Introduction Welcome to my first blog post on the topic of jQuery. 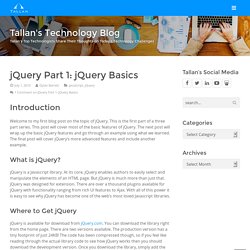 This is the first part of a three part series. Table plug-in for jQuery. Sorting Tables with Tablesorter. When developing a website we often need to show some tabular data. 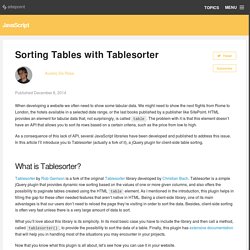 We might need to show the next flights from Rome to London, the hotels available in a selected date range, or the last books published by a publisher like SitePoint. HTML provides an element for tabular data that, not surprisingly, is called table. The problem with it is that this element doesn’t have an API that allows you to sort its rows based on a certain criteria, such as the price from low to high.

As a consequence of this lack of API, several JavaScript libraries have been developed and published to address this issue. FixedContent.js. September 29, 2014 A mobile-friendly, jQuery plugin that persists content (sidebar, nav, etc.) while scrolling. 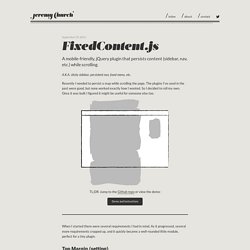 A.K.A. sticky sidebar, persistent nav, fixed menu, etc. Recently I needed to persist a map while scrolling the page. The plugins I’ve used in the past were good, but none worked exactly how I wanted. jQuery plugin for sticky elements. Sticky-kit provides an easy way to attach elements to the page when the user scrolls such that the element is always visible. The source can be found on GitHub. Basic Sticking Just call stick_in_parent on the elements you want to be stuck inside of their parent. Sticky elements “bottom out” so they never leave the container, no more worrying if a sticky element will accidentally cover your footer. $("#sidebar").stick_in_parent(); Animated Filtering & Sorting with the MixItUp jQuery Plugin. Filtering and sorting parts of your website is a great way to organize it. Portfolios, albums, and blogs are just a few examples of things you might want to categorize. To achieve this, many jQuery plugins can help. Examples are the MixItUp, Isotope, and Quicksand plugins.

In this article, I’ll go over the basic features of MixItUp and show you all the steps needed to take advantage of it in your projects. To better demonstrate how this plugin works, I’ve also created a demo, which I’ll refer to throughout the article. 10 Responsive jQuery UI Snippets. jQuery has gained immense popularity due to its simplicity in designing websites and a number of other benefits and features. jQuery turned out to be a blessing because it saves designers time in not having to rewrite codes for every screen.

Here are some of the top fresh, simple and beautifully responsive jQuery UI snippets: 1. ToneDen Player ToneDen player is a pure Java Script customizable audio player. 14 Top Calendar and Date Picker jQuery Plugins. Calendar and date interfaces are widely used among developers and is one of the most important parts of web designing. Building a website using these open source jQuery plugins is really simple. Here are 14 of the top calendar and date picker jQuery plugins for web designing: 8 Awesome jQuery Zoom Plugins. When it comes to creating a portfolio or a business website that sells products, one of the important features required is zooming. 11 Free jQuery Rating Plugins. 10 Very Useful jQuery Captcha Plugins.

8 Awesome jQuery Image Rotation Plugins. 15 Top jQuery Chart Plugins for Developers. Graphics in programs like Photoshop can be created both statistically and dynamically. 15 New jQuery Plugins for June 2015. jQuery is a library in Javascript which is not big in size; in fact it’s considerably small enough to make your website load faster. jQuery is fast and so efficient that it enhances the performance of your website adds value to its beauty. 1.11.2 and 2.1.3 Released – Safari Fail-Safe Edition. Season’s greetings! 3.0: The Next Generations. Official Plugins: A Change in The Roadmap. Barely six months ago, we announced that we were adopting three plugins developed chiefly at Microsoft – Templating, Data Link, and Globalization – as official plugins, to be developed in accordance with the standards of and supported by the jQuery project. Licensing Changes. Some important changes have occurred in the latest releases of several jQuery projects such as core, UI, Mobile, Sizzle, and QUnit.