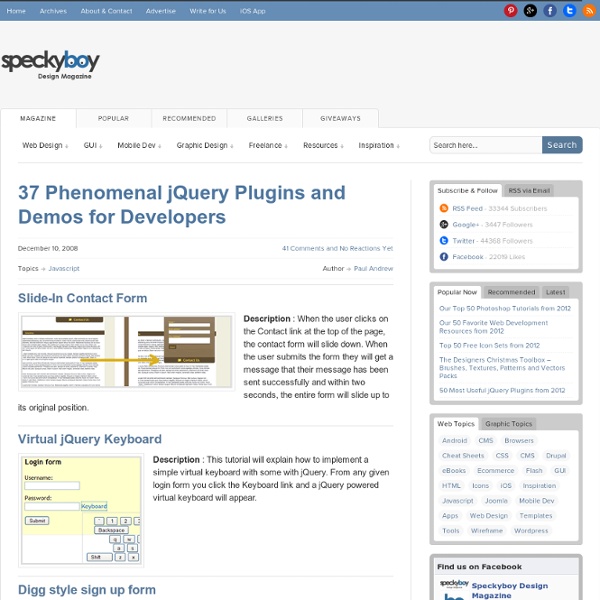 In this post we have collected 37 jQuery plugins for use in your next web project. Slide-In Contact Form Description : When the user clicks on the Contact link at the top of the page, the contact form will slide down. When the user submits the form they will get a message that their message has been sent successfully and within two seconds, the entire form will slide up to its original position. Virtual jQuery Keyboard Description : This tutorial will explain how to implement a simple virtual keyboard with some with jQuery. Digg style sign up form Description : Simulate a Digg style signup form, with its unique features such as their dynamic tooltips that give you a hint on each field that is to be filled. Load Content While Scrolling With jQuery Description : If you have lots of content to present but can not load all of it at once as it may take too long, this plugin is the answer. Pirobox jQuery Lightbox FancyBox Facebox 1.2 JQuery Cycle Plugin InnerFade Tablesorter 2.0 jGoogle jTruncate idTabs

jQuery Easing Plugin Description A jQuery plugin from GSGD to give advanced easing options. Please note, the easing function names changed in version 1.2. Please also note, you shouldn't really be hotlinking the script from this site, if you're after a CDN version you could do worse than try cdnjs.com 45 Fresh Out of the oven jQuery Plugins - Noupe Design Blog Mar 05 2008 Two month ago we’ve presented the 50 favorite jQuery plugins many developers use and we promised that the second version will be coming soon. Today, we are going to introduce 45+ more jquery plugins that were recently created, so you don’t have to do the search as we did it and will continue to do it to build a useful library of jquery plugins and solutions. Image SlideShows and Galleries 1) Galleria -Is a javascript image gallery written in jQuery.

Jquery Constant Footer - Steve Fenton : The Internet. Designing It. Developing It. Improving It. My jQuery plugins were created either as experiments or to fulfil some need that I had on a project. I made the plugins available for free on this website - and you can still get them all here now. I no longer actively support the jQuery plugins for the following reasons... Many of the features can now be achieved without JavaScript using new features of HTML and CSSSome of the features probably shouldn't even have been used, they were just experiments!Not everyone wants to use jQuery - I will create stand alone plugins for the popular stuff that don't enforce any particular framework

37 More Shocking jQuery Plugins Apr 09 2008 It’s really amazing to see what one can create using jQuery. Developers just don’t stop making incredibly interactive web applications every now and then. This post just demonstrates excellent examples of some of the best jQuery plugins out there. You can also take a look at the other jQuery Plugins in this series : So let’s get started and don’t forget to subscribe to our RSS-Feed to keep track on our next post. 14 jQuery Modal Dialog Boxes A great way to show quick information to your user is to use jQuery modal dialog boxes or windows. Dialog boxes can also use to alert them to warnings, errors and more. What if jQuery gets into the action? Well, expect coolness and boldness that can spice up your website!

jQuery BBQ » Examples » hashchange » jQuery UI Tabs Your generous donation allows me to continue developing and updating my code! With jQuery BBQ you can keep track of state, history and allow bookmarking multiple jQuery UI tab widgets simultaneously.. just click some tabs, use your browser's back and next buttons, reload the page.. and when you're done playing, check out the code! Like the advanced window.onhashchange example, window.location.hash is used to store a serialized data object representing the state of multiple tab boxes. Due to the flexibility of $.bbq.pushState(), each tab box doesn't need to know the state of any other tab box to push a state change onto the history, only their state needs to be specifed and it will be merged in, creating a new history entry and a page state that is bookmarkable. Of course, if you only want to keep track of a single item on the page, you might want to check out the basic window.onhashchange example.

25 Amazing and Fresh jQuery Plugins Keeping up with the new jQuery plugin releases and developments sometimes feels like a full-time job! Every other day something new and better crops up that catches the eye and you think yourself “Wow, that looks good, I could use that!“. For this post I have collected 25 of the best newly (or, pretty close to new) released jQuery plugins, and every time I do a post like this the plugins seem to get better and better and push development boundaries further and further away. jQuery plugin for Avgrund concept popin Avgrund is a jQuery plugin for modal boxes and popups. It uses interesting concept showing depth between popup and page. It works in all modern browsers and gracefully degrade in those that do not support CSS transitions and transformations (e.g. in IE 6-9 has standard behavior).

25 Free jQuery Photo Gallery / Albums with Tutorials 30 Free Photo Gallery / Albums with Tutorials Details Category: Webdev Hits: 20172 You Still Can’t Create a jQuery Plugin? It's tough. You read tutorial after tutorial, but they all assume that you know more than you actually do. By the time you're finished, you're left feeling more confused than you initially were. Why did he create an empty object? 50 Awesome New jQuery Plugins The jQuery community never fails to let you down. Its constantly evolving, constantly improving and, thankfully, constantly releasing a tidal wave of fresh and powerful freely available plugins for every possible requirement. Today we round-up the best and most powerful jQuery plugins from the last few months.