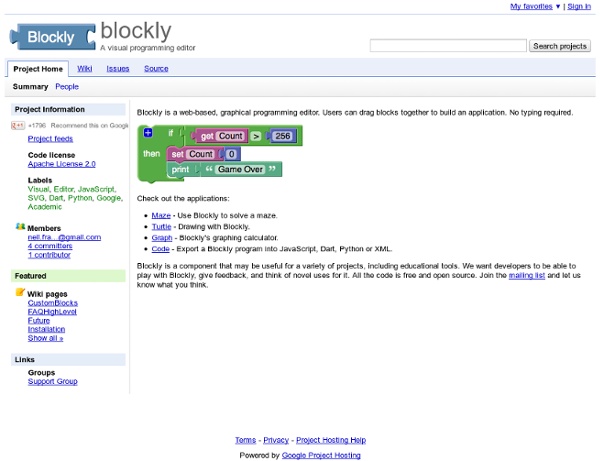 Blockly is a web-based, graphical programming editor. Users can drag blocks together to build an application. No typing required. Check out our sample applications: Puzzle - Learn how blocks work while solving this simple country quiz. Maze - Use Blockly to solve a maze. Blockly is international. Blockly is a component that may be useful for a variety of projects, including educational tools. External projects using Blockly include: MIT App Inventor - IDE for Android apps. We have created the maze tutorial to introduce children to programming and have more tutorials under construction.

iPad As.... iPads have exploded throughout schools and classrooms. Their flexibility, versatility, and mobility make them a phenomenal learning tool. As teachers seek ways to integrate these devices, we recommend focusing on specific learning goals that promote critical-thinking, creativity, collaboration, and the creation of student-centric learning environments. In other words, begin with..... Monthly Experimental Games Crayon Physics Deluxe out now for iPad November 30th, 2012 Crayon Physics Deluxe is out now for iPad!

Windows Desktop UI Concept Posted by Sputnik8 on February 24, 2012 10:24 pm This is a desktop concept that I’ve recently put together for fun. I thought I’d post a few screens to see what people here think. The screens include variations of explorer, ie (with a quick redesign of windows.com and bing), media center/player, and skype. Learn to Speak AppleScript Here’s something for both new and experienced Mac users — Part One of a short tutorial on how AppleScript can streamline your work, make you more productive, and save you time! What Exactly is AppleScript? AppleScript is an English-like language used to write programs that control applications on your computer. The “English-like” part is important — it means that you don’t need to have a computer science degree to use it. Simply put, it’s programming for regular people who want to get things done faster.

Productivity Tips - Google Apps for the iPad Productivity Tips To increase efficiency, it helps to add any commonly-accessed websites, such as the Google eBookstore or Google Docs, to the home screen as a bookmark. This allows the shortcut to show up as an app icon, taking users directly where they need to go. To do this, tap the share button at the top of the screen and choose Add to Home Screen. In addition, many third-party apps and software are available to maximize productivity and make tasks simpler for you and your students. Some include: Random Dungeon Generator A Brief History I began working on my dungeon generator sometime around 1999. It was originally hosted on the demonweb (my personal home page), moved to the Dire Press website in May 2006, and then to the donjon website in Sept 2009. Early versions included basic dungeon layout and size options, and generated maps as HTML tables of black and white cells. Code to generate images for dungeon maps was added in March 2009, and cavernous dungeons in Sept 2010.

The Educator’s Guide to Copyright, Fair Use, and Creative Commons Lately, we’ve been hearing more and more about digital copyrights and fair use in the news and online – particularly with the whole SOPA/PIPA uproar that recently swept the web. Also, we on the Edublogs support team have been getting more and more complaints and official requests to remove copyrighted content that users have placed on blogs. The legal jargon with respect to digital copyrights can be confusing – especially since different countries have their own laws and regulations.

The "Invent with Python" Blog — “I Need Practice Programming”: 49 Ideas for Game Clones to Code So you know a little bit about programming (perhaps you've read the free book, "Invent Your Own Computer Games with Python", a free programming book for beginners whose author shamelessly plugs at every chance) but you want to get better at coding. You can't seem to find any open source projects that are at your level or easy for new people to contribute to. You've gone through a few of the practice problems at Project Euler but you want to create something more substantial, or at least a cool thing you can show your friends.