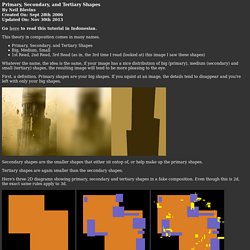 This theory in composition comes in many names. Primary, Secondary, and Tertiary Shapes Big, Medium, Small 1st Read, 2nd Read, 3rd Read (as in, the 3rd time I read (looked at) this image I saw these shapes) Whatever the name, the idea is the same, if your image has a nice distribution of big (primary), medium (secondary) and small (tertiary) shapes, the resulting image will tend to be more pleasing to the eye. 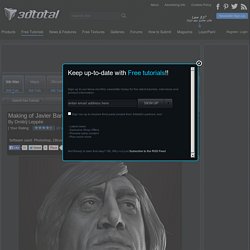 10 ways to become faster in ZBrush. Ryan Kingslien on Gumroad. Making of "The Beast" by Javier Blanco - Think Tank Training Centre. Hello, my name is Javier Blanco and I’m a Spanish model/texture artist. 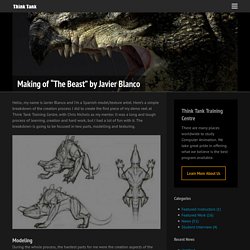 Here’s a simple breakdown of the creation process I did to create the first piece of my demo reel at Think Tank Training Centre, with Chris Nichols as my mentor. It was a long and tough process of learning, creation and hard work, but I had a lot of fun with it. The breakdown is going to be focused in two parts, modelling and texturing. Modeling During the whole process, the hardest parts for me were the creation aspects of the creature, like designing the overall shape, setting up the right flow of the scales or choosing the right references during texturing.

When the concept was done, I started modelling in ZBrush using really basic stuff. For the UVs, I had to make sure that they were big enough to show close ups details in the whole body, so I ended up having 12 tiles. The next image shows the mesh retopologized, where each Polygroup represents each UV tile, and the UVs distribution within the tiles. Skin base. VFX artist uses Luxology MODO and a Form 1+ to create amazing 3D printed zoetropes. Mar. 25, 2015 | By Simon Although additive manufacturing technologies have contributed to advancements in other ‘futuristic’ arenas including drones and virtual reality, some of the best applications for 3D printing have been in re-imagining age-old technologies with an updated twist. 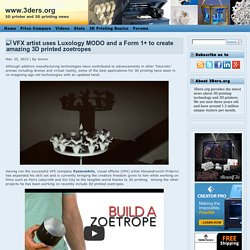 Having run the successful VFX company EyelandArts, visual effects (VFX) artist Alexandrovich Friderici has expanded his skill set and is currently bringing the creative freedom given to him while working on films such as Pan's Labyrinth and Sin City to the tangible world thanks to 3D printing. Among the other projects he has been working on recently include 3D printed zoetropes.

A zoetrope is a pre-film animation device that produces an illusion of motion by displaying a sequence of movements made from either handdrawn images, photographs or 3D models similar to a flipbook. To create his zoetropes, Friderici uses Luxology MODO (which coincidentally be used both for VFX and create 3D printable models). All Books and eBooks.

The Artists. Gumroad Tutorials List. Frank Tzeng on Gumroad. Designing a Vinyl Toy with Joe Ledbetter - Make: Although I have been working as a full-time artist in Los Angeles for more than 10 years I am probably best known as an independent toy designer. 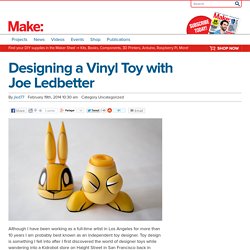 Toy design is something I fell into after I first discovered the world of designer toys while wandering into a Kidrobot store on Haight Street in San Francisco back in 2002. Since my first glance at their bizarre toy collection I instantly knew it was something I had to be a part of and, although I had no background in toys I would figure out a way. Since then, I’ve created almost 200 designer toys and held toy releases and signings all over the world; from Amsterdam to Beijing and Tokyo to Istanbul. For the past nine months I’ve been working away on a toy project called The Chaos Bunnies, and I’ll share with you the steps I took to make it happen. From beginning to end I documented my role from conception, design, packaging, photography, promotion, and everything in-between. Concept It all starts with an initial idea or concept for a toy.

How to manufacture your own designer toy or start a new small business. I have a long history of goofing off and generating images, models and sometimes even products with the express purpose of making people laugh. 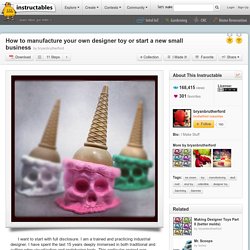 In august of 2011 i worked up a digital doodle and shared it on my blog which i thought maybe 8 people even knew about. The model started with some basic volume created in Solidworks, I prefer to start most of my digital modeling in a program like Solidworks because as far as 3-d modeling goes it is my native language and really helps me understand the scale i'm working in.