The Retrogrouch: Press-Fit Bottom Brackets: The Creaking is Standard. One of my cycling friends recently got a new mountain bike. 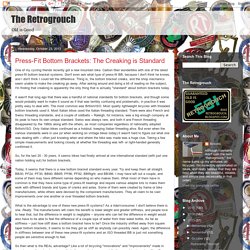 Carbon fiber wunderbike with one of the latest press-fit bottom bracket systems. Don't even ask what type of press-fit BB, because I don't think he knows, and I don't think I could tell the difference. Thing is, the bottom bracket creaks, and the shop mechanics seem unable to make the creaking go away. After asking around and doing a bit of reading on the subject, I'm finding that creaking is apparently the only thing that is actually "standard" about bottom brackets today. The Retrogrouch: Roller "Needle" Bearing Headsets. Every now and then, I like to highlight some great components that are either getting scarce or gone. 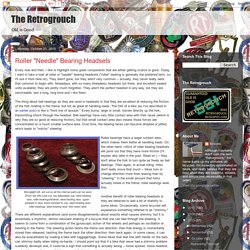 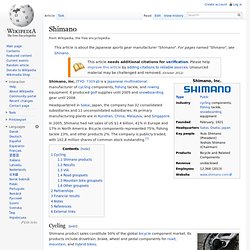 Its primary manufacturing plants are in Kunshan, China; Malaysia; and Singapore. In 2005, Shimano had net sales of US $1.4 billion, 41% in Europe and 17% in North America. Bicycle components represented 75%, fishing tackle 23%, and other products 2%. The company is publicly traded, with 102.8 million shares of common stock outstanding.[1] Cycling[edit] Shimano product sales constitute 50% of the global bicycle component market. Shimano techydocs. Sutherland's Handbook of Coaster Brake and Internally-Geared Hubs. Howard Sutherland has kindly granted permission for sheldonbrown.com to post the Handbook of Coaster Brakes and Internally Geared Hubs online. 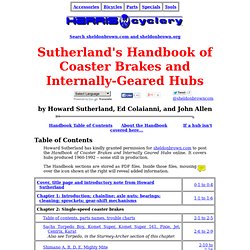 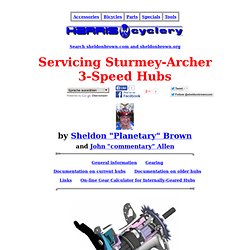 (The principle of operation is explained on another page on this site.) Among current hubs as of 2010, the S3X fixed-gear hub is different, with two step-down gears and a direct-drive gear, and a special Brompton hub has a wider range to use with two sprockets and a derailer for a total of 6 speeds. By modern standards, the typical English 3-speed bicycle is geared rather high. Most have 46/18 gearing, which gives gain ratios of 3.83, 5.11 and 6.81 (50, 66, and 89 inches; 4.00, 5.28 and 7.12 meters.) All about hubs. Links There are already lots of good sites dealing with (historical) bikes, but we will list up some very interesting sources especially about geared hubs. 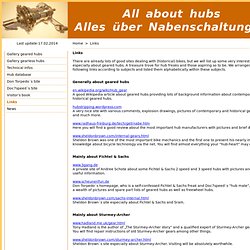 A treasure trove for hub freaks and those aspiring so to be. We arranged the following links according to subjects and listed them alphabetically within these subjects. Generally about geared hubs en.wikipedia.org/wiki/Hub_gear A good Wikipedia article about geared hubs providing lots of background information about contemporary and historical geared hubs. Shimano Nexus 7-Speed Hubs. The table below lists models of first, coaster brake, then freewheel/Rollerbrake Shimano 7-speed hubs from newest to oldest. 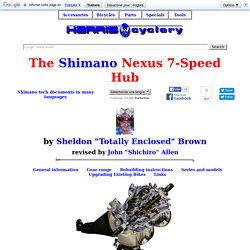 The table links to current Shimano documents, but also documents generated outside Shimano, or which Shimano no longer offers. VeloBase.com. Bicycling Science. Derailleur gears. For more information about the choice of particular gear ratios and sprocket sizes, see Bicycle gearing. 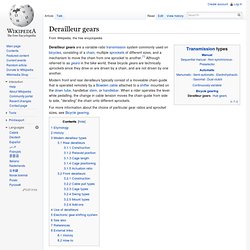 Etymology[edit] Derailleur is a French word, correctly spelled dérailleur,[1] derived from the derailment of a train from its tracks.[2] Its first recorded use was 1930.[1][3] At least one notable bicycle industry author has attempted to promote the anglicized spelling of derailer.[2][4] As of 2013, however, neither Merriam-Webster[3] nor the Oxford English Dictionary[1] has an entry for derailer. They do for derailleur.[1][3] History[edit] A modern road bicycle drivetrain with front and rear derailleurs Various derailleur systems were designed and built in the late 1800s. In 1937, the derailleur system was introduced to the Tour de France, allowing riders to change gears without having to remove wheels. In 1949 Campagnolo introduced the Gran Sport, a more refined version of the then already existing, yet less commercially successful, cable-operated parallelogram rear derailleurs.[9] Materials. So what’s it made of? 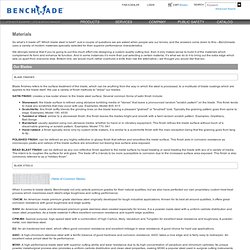 Which blade steel is best? Just a couple of questions we are asked when people see our knives, and the answers come down to this—Benchmade uses a variety of modern materials specially selected for their superior performance characteristics. We strongly believe that if you’re going to put this much effort into designing a custom quality cutting tool, then it only makes sense to build it of the materials which complement its form and enhance its function.

And in some instances it’s more than just selecting a certain material, it’s what we do to it to bring out the extra edge which sets us apart from everyone else. Bottom line, we would much rather overbuild a knife than risk the alternative—we thought you would like that too. Our Blades Blade finishes refers to the surface treatment of the blade, which can be anything from the way in which the steel is processed, to a multitude of blade coatings which are applied to the blade itself. (Table of Common Steels) Materials. Tool steel. Tool steel refers to a variety of carbon and alloy steels that are particularly well-suited to be made into tools. 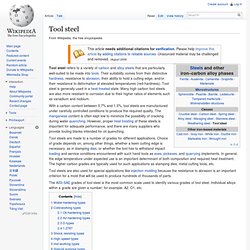