The 'Airbnb effect': is it real, and what is it doing to a city like Amsterdam? Sito Veracruz lives in the centre of Amsterdam. 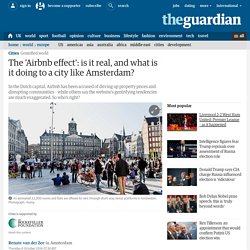 Some years ago, he enthusiastically rented out a room on Airbnb. “At first I thought it was a great idea,” he recalls. “But I now realise there are side-effects that we didn’t foresee. Airbnb can be a threat for cities.” Veracruz, an urban planner, witnesses daily how the large number of apartments rented out on Airbnb and other short-stay rental websites are bringing more and more tourists to the central areas of Amsterdam. “I think it’s obvious that Airbnb contributes to gentrification,” Veracruz says. Such is Veracruz’s concern that he is trying to create an alternative service: Fairbnb. “I am talking about a platform that really complies with the principles of a fair, non-extractive and collaborative economy,” Veracruz says. The issues triggered by the global rise of Airbnb are a subject of ongoing debate in Amsterdam. 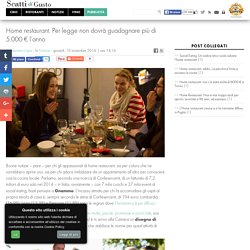 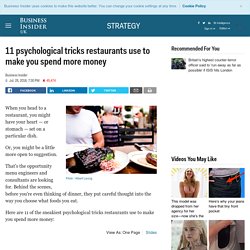 According to further research from the University of Illinois at Urbana-Champaign, descriptive menu labels raised sales by 27%, compared with food items without descriptors. On an NBC "Today" show interview, menu engineer Gregg Rapp poses an example of Maryland-style crab cakes. They are described as "made by hand, with sweet jumbo crab meat, a touch of mayonnaise, our secret blend of seasonings, and golden cracker crumbs for a rich, tender crab cake. " This brings the ultimate sensory experience to the reader, and the descriptive labeling will make customers more likely to be satisfied at the end of the meal.

Interestingly, brand names in menu descriptions also help sales, which is why chain restaurants such as T.G.I. Sweet Inn - Holiday Apartments with Hotel Services. Airbnb Made Me Homeless (So I Used My Wish Lists) Hello, You've learned about the existence of Airbnb's Wish Lists in one of my video so I thought I'd tell you more about how I use this feature. 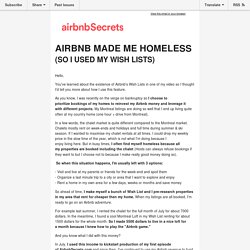 As you know, I was recently on the verge on bankruptcy so I choose to prioritize bookings of my homes to reinvest my Airbnb money and leverage it with different projects. My Montreal listings are doing so well that I end up living quite often at my country home (one hour + drive from Montreal). In a few words, the chalet market is quite different compared to the Montreal market. Chalets mostly rent on week-ends and holidays and full time during summer & ski season. So when this situation happens, I'm usually left with 3 options: - Visit and live at my parents or friends for the week-end and spoil them- Organize a last minute trip to a city or area that I want to explore and enjoy- Rent a home in my own area for a few days, weeks or months and save money For example last summer, I rented the chalet for the full month of July for about 7000 dollars. Social Cooking, il ristorante a casa tua. Uno studio dell’ Euromonitor International ha definito il fenomeno del social cooking il più grande trend da analizzare e studiare nel 2015. 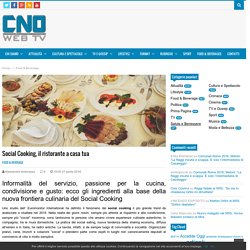 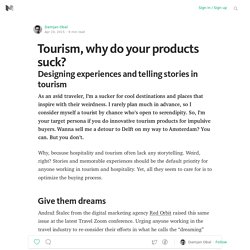 I rarely plan much in advance, so I consider myself a tourist by chance who’s open to serendipity. So, I’m your target persona if you do innovative tourism products for impulsive buyers. Wanna sell me a detour to Delft on my way to Amsterdam? You can. Why, because hospitality and tourism often lack any storytelling. Give them dreams Andraž Štalec from the digital marketing agency Red Orbit raised this same issue at the latest Travel Zoom conference. The IT industry seems to care more about the dreaming state we find ourselves before buying shiny objects like computers. Dreams are stories What Apple sells are nothing more than stories. After you click on the banner saying “Sicily in your pocket for 450€” you land on a website that looks the same as all the others.