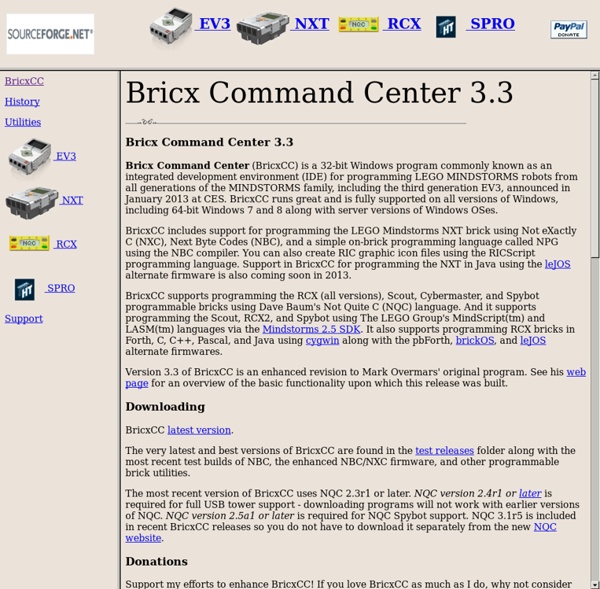 Sensors for Lego NXT, RCX, and VEX Robots MINDSTORMS NXT Home LEGO, the LEGO logo, DUPLO, BIONICLE, MINDSTORMS, HEROICA and the Minifigure are trademarks and/or copyrights of the LEGO Group. ©2012 The LEGO Group. All rights reserved. Francesco Ferrara Homepage - Quite C Quite C is intended to be a repackaging and reordering of a miniOS (no multitasking!) for the Lego RCX. It provides an interface between your C code and the ROM. The intent is to allow you to write very large programs in C language (neural and pathfinder programs like) with Microsoft Windows platform. LegOS is too Unixish ;) Quite C is distributed under the Mozilla Public License. Andy Clapham new Project with QC: Speech With its programs it is possible to play some speech wav Mario and Giulio Ferrari have a new book out for only $19.95 (21.60) Building Robots with Lego Mindstorms It IS a fantastic book as it mentions this site. Visor - A simple LEGO camera robot with the help of Visual Basic 6 build a .TGA picture file. You must download H8 compiler and the libs, Unzip the compiler into C:\QUITE C\ directory and set path (use env.bat as an example) to C:\QUITE C\BIN directory. Sorry, but download.bat support only COM1 for IR Tower. PowerOff now works! First Release

Online : Lego motor shield for Arduino From the MAKE Flickr pool Joining the modular forces of Arduino and Lego, Greg and Rael built the above-seen motor shield with a convenient plastic brick interface. Head over to Flickr for more project pics. In the Maker Shed: MotorShield for Arduino Kit Collin Cunningham Born, drew a lot, made video, made music on 4-track, then computer, more songwriting, met future wife, went to art school for video major, made websites, toured in a band, worked as web media tech, discovered electronics, taught myself electronics, blogged about DIY electronics, made web videos about electronics and made music for them … and I still do! collin@makezine.com Related Lynxmotion Robot Kits Lego Mindstorms NXT Logo of LEGO NXT. "Golf bot" — a robot built with the NXT set. LEGO Mindstorms NXT is a programmable robotics kit released by LEGO in late July 2006.[1] It replaced the first-generation LEGO Mindstorms kit, which was called the Robotics Invention System. The base kit ships in two versions: the Retail Version (set #8527)[2] and the Education Base Set (set #9797).[3] It comes with the NXT-G programming software, or optionally LabVIEW for LEGO MINDSTORMS.[4] A variety of unofficial languages exist, such as NXC, NBC, leJOS NXJ, and RobotC. A new version of the set, the new Lego Mindstorms NXT 2.0, was released on August 1, 2009, featuring a color sensor and other upgraded capabilities. There is now a new Lego Mindstorms Robot, called the EV3. NXT Intelligent Brick[edit] NXT Intelligent Brick The Intelligent Brick remains unchanged with NXT 2.0. Firmware and developer kits[edit] Several developer kits are available that contain documentation for the NXT: Programming[edit] NXT-G[edit] Robolab[edit]

MINDSTORMS SDK2.5 The LEGO Company does no longer offer technical support to advanced users on the historical MINDSTORMS range, specifically those using the SDK 2.5 (RCX™ and Scout™), and Spybotics™ range. Related tools and documentation were removed from MINDSTORMS website in 2008. Here below you will find these tools. By downloading them, you agree with the following: Contains various documentation on RCX2 and Spybotics byte codes and LASM, as well as documentation, libraries and header files for PC to brick communications. Download SDK2.5 (9Mb) Updated USB Tower Windows drivers These drivers solves an issue occurring with HyperThread or multicore CPUs. Download Tower driver version 1.0.50.164. RIS 2.0 XP Patch These patch should help you getting Robotics Invention System run under Windows XP. Download RIS 2.0 XP Patch

Homebrew lego sensors The following is my first attempt at making some lego sensors for the Mindstorms Robotics Invention System. Thanks to Michael Gasperi for the original instructions on making a temperature sensor: So far, I've made three sensors and one Frankenstein radio control module using a Rokenbok vehicle: Temperature SensorLight SensorBend SensorRokenbok radio control module Construction notes Tools you'll need: a drill, hacksaw, and soldering iron. Use a 3/16" bit and drill out two pegs in a lego block - it may be easier to start with a smaller bit to make a starter hole for the larger bit. I used 3/16" brass tubing for two of the sensors (bend and temp), and 3/16" aluminum tubing for the light sensor. After cutting the tubing, I filed the ends to eliminate any sharp ends so legos attaching on top of the pegs wouldn't get scratched or gouged. Temperature Sensor Light Sensor Bend Sensor Direct questions or comments to Brian Stormont.