A case-series of adverse events, positive re-challenge of symptoms, and events in identical twins following hepatitis B vaccination: analysis of the ... Hepatitis B vaccine and liver problems in U.S. children less than 6 years old, 1993 and 1994. Adverse events associated with hepatitis B vaccine in U.S. children less than six years of age, 1993 and 1994. MILLMAN.GRIFFIN111907. Swine flu jab and narcolepsy may be linked by autoimmune response. Scientists appear close to pinpointing why a swine flu vaccine given to six million people in Britain triggered the devastating sleep disorder, narcolepsy, in rare cases. 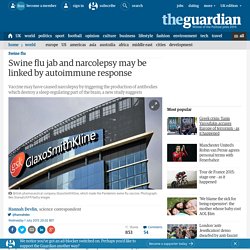 The Pandemrix vaccine, made by GlaxoSmithKline (GSK), and which was recommended by the UK government to high-risk groups during the 2009-10 swine flu pandemic, was withdrawn after medical records showed a spike in the number of cases of narcolepsy presenting in doctors’ surgeries. But until now it has not been clear why the jab caused the chronic illness, which involves uncontrollable daytime sleepiness, in around one in 55,000 recipients.

The latest study suggests that in rare cases, Pandemrix led to patients producing antibodies that attacked and destroyed a critical hub of brain cells that help regulate tiredness. Dr Sohail Ahmed, global head of clinical sciences at Novartis Vaccines and first author of the study, said: “There’s a lot of evidence now to suggest that narcolepsy is an autoimmune disease. HepB Vaccine Causes Liver Disease: Science Shows How. The science is definitive: The Hepatitis B vaccine is not only associated with liver disease, it causes it. 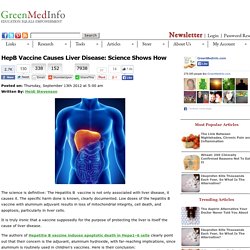 The specific harm done is known, clearly documented. Low doses of the hepatitis B vaccine with aluminum adjuvant results in loss of mitochondrial integrity, cell death, and apoptosis, particularly in liver cells. It is truly ironic that a vaccine supposedly for the purpose of protecting the liver is itself the cause of liver disease. The authors of Hepatitis B vaccine induces apoptotic death in Hepa1–6 cells clearly point out that their concern is the adjuvant, aluminum hydroxide, with far-reaching implications, since aluminum is routinely used in children's vaccines. Here is their conclusion: The bottom line is that the hepatitis B vaccine is responsible for killing liver cells. These are just a few of the studies documenting harm from hepatitis B vaccines and aluminum adjuvants.

The answer to this question is particularly disturbing. Continue to Page 2. Hepatitis B vaccines and the risk of multiple sclerosis: a comment on the study by Langer-Gould et al. (2014) In accordance with my previous criticism regarding the methodological reliability of most studies presented as confirming the safety of vaccines, this investigation [1] raises a number of serious concerns. 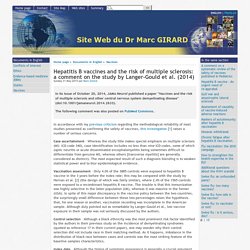 Case ascertainment – Whereas the study title makes special emphasis on multiple sclerosis (MS: ICD code 340), case identification includes no less than nine ICD codes, some of which (optic neuritis or acute disseminated encephalomyelitis being sometimes difficult to differentiate from genuine MS, whereas others [transverse myelitis] are generally considered as distinct). The most expected result of such a diagnosis blending is to weaken statistical power and to blur epidemiological evidence. Index date – Although the timing of symptoms appearance is generally a crucial argument for causality in drug monitoring (there may be exceptions to this rule), this parameter is never properly considered in investigations devoted to post-vaccine MS. Pediatrics. Mobile Edition.

Hepatitis B virus (HBV) and autoimmune disease. Rheumatic disorders developed after hepatitis B vaccination. Hepatitis B Vaccine Press Release 7/8/99. July 8, 1999 FOR IMMEDIATE RELEASE: School Districts Requiring Vaccines Accused of Practicing Medicine Without a License The Association of American Physicians and Surgeons (AAPS) is calling for an immediate moratorium on mandatory hepatitis B vaccines for schoolchildren pending further research about dangerous side effects, and accused school districts which require the shots of practicing medicine without a license. 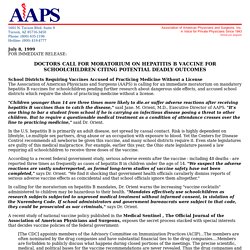 "Children younger than 14 are three times more likely to die.or suffer adverse reactions after receiving hepatitis B vaccines than to catch the disease," said Jane. M. Orient, M.D., Executive Director of AAPS. "It’s one thing to bar a student from school if he is carrying an infectious disease posing a threat to other children. In the U.S. hepatitis B is primarily an adult disease, not spread by casual contact. Chronic fatigue syndrome and fibromyalg... - PubMed Mobile - NCBI. Hepatitis B vaccination of male neonate - PubMed Mobile. The Link Between Vaccines And Type-1 Diabetes.