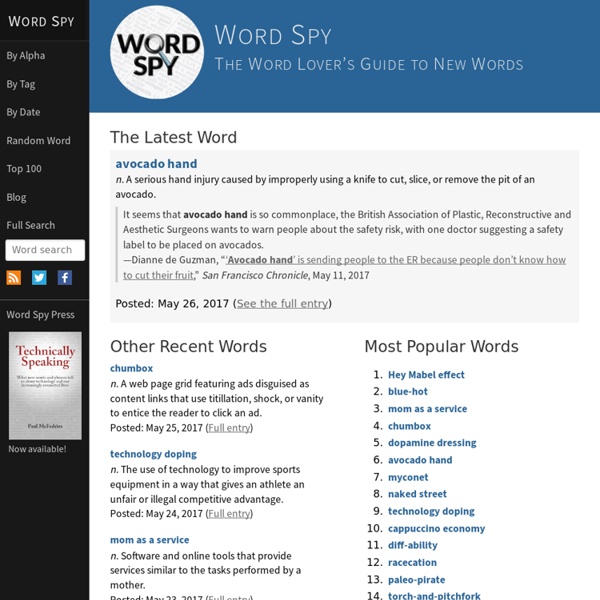 n. The mechanism that harvester ants use to regulate foraging activity, which is analogous to the mechanism used to regular internet data transfers. Also: Anternet. [ant + internet] Computer people call it Transmission Control Protocol, which is an algorithm to deal with data congestion. They send out files and see how long it takes to receive a reply.

Flotsam and jetsam Meaning Ships' goods which are lost at sea. Also used figuratively in non-nautical contexts to means odds and ends, bits and pieces. Origin Flotsam and jetsam are rarely seen apart nowadays although the words, in a variety of spellings, have separate meanings and were frequently used independently in the 17th century. John Cowell, in his 1607 publication The interpreter: or booke containing the signification of words [what we would now prosaically call a dictionary] wrote of "Flotsen alias (Flotzam)".

OneLook Reverse Dictionary <div id="needs_javascript"><center><b>Note: OneLook Thesaurus requires JavaScript.</b><br /><img src="/img/a.gif?q=omg_a_user_without_js"> If you have disabled JavaScript in your browser, please <a href=" it for this site</a> or use the <a href="/?w=entersearchhere&loc=revfp_legacy">old version of the reverse dictionary</a> here.</p><p></center><div> How do I use OneLook's thesaurus / reverse dictionary? 100 Exquisite Adjectives By Mark Nichol Adjectives — descriptive words that modify nouns — often come under fire for their cluttering quality, but often it’s quality, not quantity, that is the issue. Plenty of tired adjectives are available to spoil a good sentence, but when you find just the right word for the job, enrichment ensues. Practice precision when you select words. Here’s a list of adjectives: Subscribe to Receive our Articles and Exercises via Email

Specialised help for children with dyslexia pays dividends Published: 6:07AM Saturday August 16, 2014 Source: ONE News Compelling research shows learning outcomes for children with dyslexia can be vastly improved. Specialised, early intervention can significantly boost success at school for a child with dyslexia, a pilot study shows. Expressions & Sayings Index If you prefer to go directly to the meaning and origin of a specific expression, click on its relevant entry in the alphabetical list below. Use this alphabet to speed up your search: A B C D E F G H I J K L M N O P Q R S T U V W X Y Z 50 Obscure English Words to Impress Your Friends According to the Global Language Monitor, English has more than 1,000,000 words (although even large dictionaries tend to contain about a third or a fourth), more than any other language spoken on Earth (that's more than thrice the amount of words in Spanish alone, another leading language in amount of words). Yet, most people only know 5,000 - 6,000! Of course, often, not much more than that is needed; English has an incredible amount of words with the exact same meaning. As said by About.com, English has only 250,000 - 300,000 when only "normal" words are counted; the rest are obsolete words, technical terms, or jargon that has more or less entered our language. A lot of these words are so bizarre, that you wonder why they were ever coined.

12 Horrible Gobbledygook Words We Reluctantly Accepted Just as there is nothing certain in this world but death and taxes, there is nothing certain in language but that it will change, and that people will react badly. One of the changes people find most offensive is the spread of professional jargon that has been coined to replace simpler, clearer words we already have. Anyone up for some collaborative incentivizing going forward?

English / Learning areas / The New Zealand Curriculum Ko te reo te tuakiriKo te reo tōku ahureiKo te reo te ora. English is the study, use, and enjoyment of the English language and its literature, communicated orally, visually, and in writing, for a range of purposes and audiences and in a variety of text forms. Learning English encompasses learning the language, learning through the language, and learning about the language. Understanding, using, and creating oral, written, and visual texts of increasing complexity is at the heart of English teaching and learning. By engaging with text-based activities, students become increasingly skilled and sophisticated speakers and listeners, writers and readers, presenters and viewers.