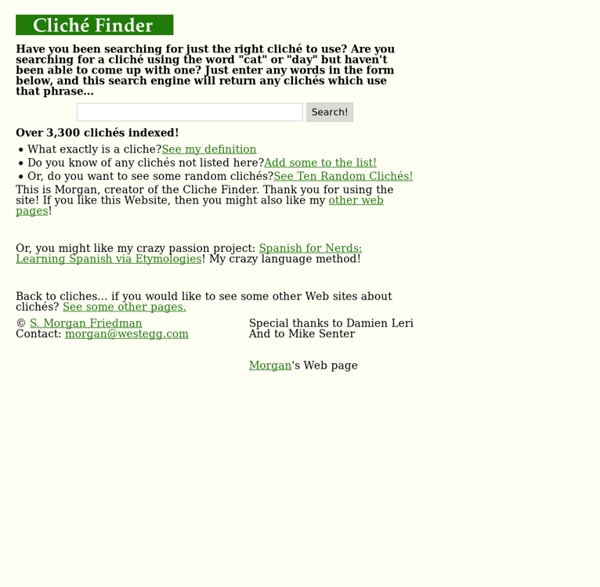 Have you been searching for just the right cliché to use? Are you searching for a cliché using the word "cat" or "day" but haven't been able to come up with one? Just enter any words in the form below, and this search engine will return any clichés which use that phrase... Over 3,300 clichés indexed! What exactly is a cliche? This is Morgan, creator of the Cliche Finder. Or, you might like my crazy passion project: Spanish for Nerds: Learning Spanish via Etymologies! Back to cliches... if you would like to see some other Web sites about clichés? © S. Special thanks to Damien LeriAnd to Mike Senter Morgan's Web page

30 True Things You Need to Know Now : The BridgeMaker - StumbleUpon You can bend it and twist it. You can misuse and abuse it. But even God cannot change the Truth. – Michael Levy It is never too late to bring about lasting change for your life. Dr. , a Vietnam War veteran and practicing psychiatrist has experienced, first hand, the tragedies life can bring upon us. After learning more about Dr. Too Soon Old, Too Late Smart provides 30 essential truths to remind us that while we can’t escape who we are or what has happened to us; we are responsible for who we would like to be and where we want to go. If the map doesn’t agree with the ground, the map is wrong. Alex’s new book, Letting Go: 25 True Stories of Peace, Hope and Surrender, is now available (get 10 free Peace and Balance tools when you order).

Tension - StumbleUpon Hook Your Readers With Tension By Laura Backes, Write4Kids.com Tension. Without it, life would be—let's face it—boring. So would fiction. Tension works with conflict to raise the emotional level of the text to a boiling point. "Tension" is a loaded word, and can be misleading. Tension is what hooks readers of any age and keeps them turning the pages. * The ticking clock. * Dialogue. * Pacing. * Sentence structure. Each story requires a different kind of tension. Laura Backes is the author of Best Books for Kids Who (Think They) Hate to Read from Prima/Random House. Copyright © 2002, Children's Book Insider, LLC

100 French Food/Drink Words and Phrases It's Bastille Day! If only your 10th grade French teacher had taught you what you really need to know — impressing that special someone at the restaurant where you’re maxing out your credit card. Don’t let that stop you though, because what they say is true: France is a haven for food and wine enthusiasts of all levels, and French cuisine is a palate-expanding experience everyone should have. Try out some of my extensive choice vocabulary for avoiding snails, raw beef and frogs’ legs (although why would you want to?) or honing the basics for customizing your steak-frites and procuring the right water. Drinking Avec des glaçons: On the rocks La biére: Beer Une bouteille: A bottle Le café: Coffee (typically Espresso) Une crafe: A glass bottle (usually of wine) La carte de vins: The wine list Le cidre: Cider Le jus: Juice Le Kir: White wine with cassis or blackberry syrup Un pichet: A small pitcher (usually of wine) Things that are potentially disgusting (but are usually delicious)

Jean Meslier Jean Meslier Jean Meslier (French: [melje]; also Mellier; 15 June 1664[1] – 17 June 1729), was a French Catholic priest (abbé) who was discovered, upon his death, to have written a book-length philosophical essay promoting atheism. Described by the author as his "testament" to his parishioners, the text denounces all religion. Life[edit] Thought[edit] In his most famous quote, Meslier refers to a man who "...wished that all the great men in the world and all the nobility could be hanged, and strangled with the guts of the priests Equally well-known is the version by Diderot: "And [with] the guts of the last priest let's strangle the neck of the last king Voltaire's Extrait[edit] Various edited abstracts (known as "extraits") of the Testament were printed and circulated, condensing the multi-volume original manuscript and sometimes adding material that was not written by Meslier. Meslier's significance[edit] For the first time (but how long will it take us to acknowledge this?) References[edit]

201 Ways to Arouse Your Creativity | Write to Done - StumbleUpon Arouse your creativity Electric flesh-arrows … traversing the body. A rainbow of color strikes the eyelids. A foam of music falls over the ears. Creativity is like sex. I know, I know. The people I speak of are writers. Below, I’ve exposed some of their secret tips, methods, and techniques. Now, lie back, relax and take pleasure in these 201 provocative ways to arouse your creativity. Great hacks from Merlin Mann of 43 Folders

22 Killer Personal Development Resources You're Missing Out On You’ve got the personal development itch once again. You know the feeling. Maybe you want to be more productive, finally tackle that goal of yours, or start waking up earlier. So you go to Google or your favorite personal development blogs. And that’s it. Sometimes you find what you need, but you still have a sense that there’s got to be more. And that’s where you get stuck. Today I hope to change that by sharing with you 22 of the killer personal development resources you’re missing out on. 1. I know, you thought Reddit was just for gamers, atheists, and students – but that’s a misconception. 2. Mindbloom.com is a nifty personal development web application. 3. Lately, it seems there have been hundreds of eLearning websites popping up across the web. 4. There are plenty of ways to motivate you to work out, but the app Gympact does something quite clever and unique. Okay, so plenty of you know Ted already, but do you remember the first day you discovered it? 6. 7. 8. 9. 10. 11. 13. 14.

The Anagram Dictionary - StumbleUpon t h e a n a g r a m d i c t i o n a r y Online Dictionary - Orchy G'day all... A long time ago I decided to make use of an electronic scrabble dictionary by using it to build an anagram dictionary. Anything with that many words is going to show up on a huge number of web spider searches. No Title Hi! With this little message, the file is not only coming up eventually in a fair proportion of all searches, but it also had a summary that aroused people's curiosity. I had no intention of experimenting with the web or trying to lure web users into my den. It's interesting the number of anagrams that are fitting: Eternity and entirety, backward and drawback, discern and rescind, demand and madden, comedian and demoniac, American and cinerama, aspirate and parasite, oldies and soiled, lust and slut, to name a few of many hundreds. abbe babe abed bead bade abel elba bale able bela abet beat beta bate abhorred harbored abhorrer harborer abides biased able abel elba bale bela abler baler blear blare aces case

10 Best Places to Live for Escaping World Conflict Where would you be the safest if World War 3 broke out tomorrow? Perhaps it’s a grim subject, but safety and distance from world conflict can be a motivating factor in your choice to expatriate. At the very least, conflict around the world can weigh heavy on the soul, and it’s nice to know there are some places still left in the world where you might be left in peace. Thus, we’ve assembled a list of the 10 best places to live if you want to escape world conflict. 10. Switzerland Switzerland’s long history of neutrality and its tucked away location among the valleys of the Alps still make it a safe bet, even despite having a high number of bordering nations. 9. Costa Rica has a stable democracy, a disbanded military and a national policy of neutrality. 8. There are regions of Papua New Guinea that are still being discovered for the first time. 7. 6. 5. 4. Isolated in the middle of Micronesia, Tuvalu is among the safest and most remote places in the world. 3. 2. 1. Comments