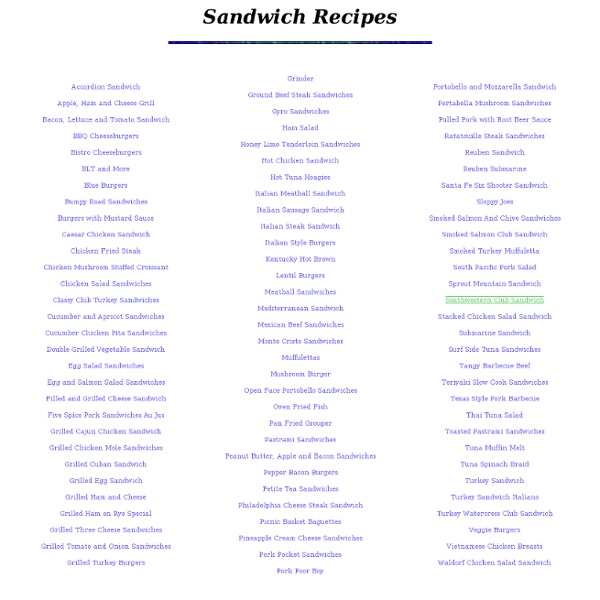 Cheesy Chicken, Bacon and Avocado Quesadillas What is it about bacon & avocado that I absolutely love?? And these quesadillas… with their buttery, crispy, heavenly tortilla shells… are seriously yum. Don’t let the green scare ya, avocados have a really delicious taste. I promise they’re not just thrown in to “healthify” this recipe! ;) Quesadillas are one of our favorite quick and easy weeknight meals. Come on, let’s make these, you’ll love ‘em!

100 Delicious, Dirt-Cheap Recipes for the Starving Student Most students don’t have a lot of cash to spend on food, but that doesn’t mean you have to go hungry. With the right recipes and some kitchen savvy, you can eat great even on a student’s budget. Here we’ll share 100 tasty recipes that you can make on the cheap.

Kubrick's bathrooms Stanley Kubrick: An Indoor-Plumbing Luddite by Stephanie Morgan Men like Marshall McLuhan pronounce the downfall of civilization in clear terms – in his case, the advent of written language split apart our tribal society forever destroying our close-knit society that was once built upon the need to remain close in order to receive information. Three years after his death, I realize that an artist like Stanley Kubrick is subtler when describing the downfall of civilization. Best known for films like “2001: A Spacey Odyssey,” “Full Metal Jacket,” and “Eyes Wide Shut,” Kubrick was once one of the famed five directors with “final cut” status. Cooking Momofuku at home - Momofuku for two - StumbleUpon October 2, 2010 My mom is obsessed with keeping a stocked freezer, but I guess I don’t really take after her, because my freezer tends to be relatively empty, aside from random containers of stock/ramen broth, frozen dumplings and pierogi. I admit, I store buy frozen chinese dumplings and pierogi for those times that I just don’t feel like cooking. I tell myself it’s because of ease and convenience, but really, I just love the taste of frozen pockets filled with deliciousness.

Nutella Cinnamon Rolls May 10, 2011 | Print | E-mail | Filed under bread, nutella There are some days that I just lose my appetite. It might be because of my mood, or that nothing sounds good, or that I’m in a food rut again and need to spice things up a bit. When my appetite comes back though, what I’m inevitably craving is some sort of comfort food. How to Make Candied Ginger While some of my coworkers use their kitchens as at-home culinary labs, mine is definitely more low-tech. The wares from my pantry could be described as Little House on the Prairie meets the 21st century: tomato-port jam and jalapeño pepper jelly, a blushing red onion marmalade, turmeric-laced zucchini pickles. My philosophy: Why buy it if you can make it (and make it better)? However, it didn’t occur to me to make my own candied ginger until I was hit with sticker shock at my local specialty-foods store ($10 for 3 ounces? and don’t even try to find it at your nearby supermarket). While I was staring in disbelief at the package, I let my eyes wander to the ingredient list: ginger, sugar.

In my bar - Select (The Webtender) Select the ingredients you have in your bar from this rather large list of ingredients. This list is created from all ingredients used in more than one or two drinks. When you finish your selection, go to the bottom of the page and click the "Generate List of Drinks" button. The Webtender will then generate a list of all drinks possible to make from your selection of ingredients. If you click "Pick Random", one of the drinks you can make will be selected for you.

100 Useful Search Engines for Chefs, Cooks and Food Lovers By Alisa Miller While everyone has to eat, only those true foodies are absolutely devoted to their food. Whether you make it professionally, as a hobby, or just love to eat good food, you will find search engines from this list below to make your nose and tongue sing. From recipes to ethnic foods to restaurants to local farmer’s markets to wine and beer, these search engines will help you find exactly what you want when it comes to creating and appreciating delicious food and beverages. Recipes

Cheeseburger Macaroni This delicious, incredibly cheesy dish is another one of our favorite weeknight dinners. It’s beefy, hearty and whips up in less than 20 minutes. Hope you love this one as much as we do! Start with one pound of lean hamburger meat, browned and drained. Add a package of taco seasoning. And one can of this. Make Your Own: Candy There’s a reason why they put all that deliciously sweet candy up by the cash registers in nearly every store: if you had to find it at the back of the place, you’d likely decide against it before you got up front to pay. But you’re an adult, and once a child sets their sights on a candy bar, there’s no turning back. Instead of worrying about all of the sketchy ingredients, extra calories, additives, and possible allergens in popular packaged sweets, here are a few recipes to Make Your Own Candy right at home. Homemade Twix Candy Bar Recipe

Shoe Lacing Methods Mathematics tells us that there are more than 2 Trillion ways of feeding a lace through the six pairs of eyelets on an average shoe. This section presents a fairly extensive selection of 50 shoe lacing tutorials. They include traditional and alternative lacing methods that are either widely used, have a particular feature or benefit, or that I just like the look of. 50 Different Ways To Lace Shoes Criss Cross Lacing This is probably the most common method of lacing normal shoes & boots.