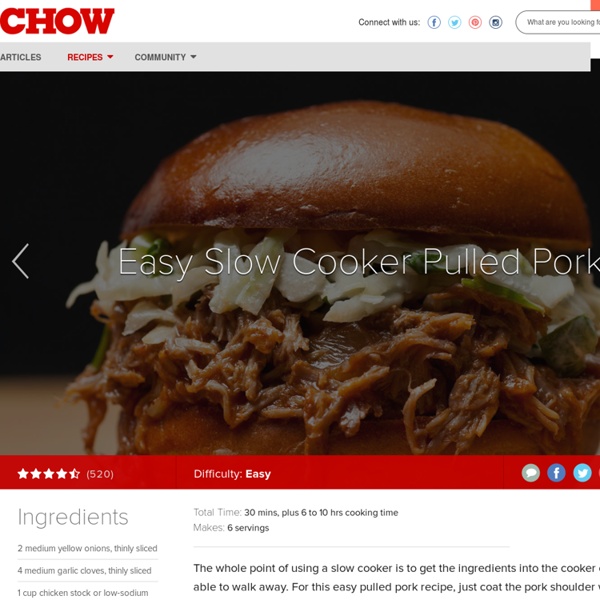 Difficulty:Easy | Total Time: | Makes:6 servings The whole point of using a slow cooker is to get the ingredients into the cooker quickly and then be able to walk away. For this easy pulled pork recipe, just coat the pork shoulder with a spice rub of dark brown sugar, chili powder, cumin, and cinnamon, then cook it on a bed of garlic and onions covered with chicken broth. When you come back six to ten hours later, you’ll have juicy pork that’s ready to be shredded and served atop nachos, alongside cornbread, or in a sandwich with your favorite barbecue sauce. This no-fuss, versatile recipe makes enough to feed a crowd, and the leftovers—should you have any—freeze well. Click below to watch the CHOW Test Kitchen’s Christine Gallary make this simple pulled pork in an episode of our Easiest Way video series. Place the onions and garlic in an even layer in the slow cooker and pour in the stock or broth.

Easy Slow Cooker BBQ Beef Brisket Recipe I think doing it a day or two ahead is fine. One thing I found is brisket releases a LOT of fat. And while I have nothing against fat there is way too much. Spiced Pork Chops with Sweet and Sour Glaze (Agrodolce) Recipe : Giada De Laurentiis Directions Pork: In a large, heavy skillet, heat the olive oil over high heat. Season the pork chops with salt and pepper, to taste, and sprinkle with the red pepper flakes. How to Make the Best Potato Salad This isn’t my first potato salad recipe rodeo on this bloggity blog, but it’s for sure my favorite and dare I say, the best. Okay, that might be a pretty bold statement, stating this potato salad as the best. I’ve shared several variations of potato salad here including the more complicated, throw everything in but the kitchen sink Stetson Chunky Potato Salad to my Roasted Potato Salad with Bacon Dressing to my Loaded Baked Potato Salad that has definitely risen in the ranks of favorites. But I’ve yet to share the number one potato salad that worms its way into nearly every BBQ, picnic or just good old fashioned supper at my house, the one I’m proud as punch to share when I go to other’s homes as well. This classic potato salad is the one I grew up on. It’s the recipe my Grandma Mary Jane made, then passed onto my mom who made it to accompany every hamburger, grilled ribs or other summer deliciousness, and who then passed it onto me and my sister.

Roasted Pork Loin with Calvados Cream Sauce Recipe Difficulty:Easy | Total Time: | Makes:6 servings This roasted pork loin is an easy and fancy holiday dinner option. Rub the pork with salt, pepper, brown sugar, and fresh thyme, then roast until golden brown. While the pork roasts, add some sweet cipollini onions and salty pancetta to the pan, then use the tasty drippings to make a creamy pan sauce of Calvados, apple cider, chicken stock, and a touch of cream for richness. Serve with a poached pear salad and plenty of crusty bread to soak up the delicious sauce.

Pumpkin & Black Bean Burgers As promised in the last post, this is the reason I made the lemon cilantro crema. I typically save eating out for the weekend as a sort of treat (i.e. you don't have to cook or bake tonight), but last friday night I had it in my head I was going to finally try Sara's pumpkin and black bean patties. I also got it in my head to make a lemon cilantro crema to slather on the buns as well as a side of roasted sweet potato wedges to enjoy on the side. The planning of this dish started in the morning, and taunted me until I could get home to my kitchen and actually make it. (does this ever happen to anybody?

Pork Souvlaki with Tzatziki I’ve been holding out on you. Earlier this year I was thumbing through the March issue of Food & Wine magazine, when I came across this recipe for Pork Souvlaki & Tzatziki. It stuck out for two main reasons. First, was the presentation. Slow Cooker Buffalo Chicken Slow Cooker Buffalo Chicken This recipe could not be easier. There are only 4 ingredients and you simply layer three of them in your slow cooker in the morning, go to work, come home, shred the meat, wait a little longer and then voila: your main course is ready! If the thought of turning on your oven in the summer has you placing a regular daily order at your local pizza joint, this may be the perfect solution. Slow Cooker Pork and Sauerkraut Recipe - CHOW.com Last night, doing a trial run for Oktoberfestt I did an enamelled cast iron dutch oven version of a very simplar recipe (Jacques Pépin's adaptation of Alsatian Choucroute Garni for the home cook on foodandwine.com). I was really happy with the flavor combination in the recipe -- it was similar to yours here with the combo of caraway + juniper berries instead of one or the other, and the absence of oversweetening that a lot of English language versions of this recipe are prone to add. The broth cooked up really delicious. I just want to add that for those who don't eat pork, a really delicious discovery I mad eyears ago was that good quality smoked turkey wings are amazing in this recipe. They stand up to the long cooking much better, making the sauce really creamy and delicious, and becomng fork tender.

Chickpea Pumpkin Burgers Two little pumpkins, too many recipes was I tempted by. For a few weeks the pretty little squashes graced my kitchen table while I imagined the occasion for their sacrifice. The carving knife was finally brought out after I saw Helen Graves' pumpkin and chickpea burgers. While pumpkin butchering is a rather laborious experience, the yield is worth the effort: a few cups of flesh stashed away in the freezer, and roasted pumpkin seeds, scrumptious patties and wholesome pumpkin scones were offered up this past weekend.

Pork Rouladen November 1, 2010 Pork Rouladen I hope everyone had a fun Halloween! Crock Pot Sweet Potato and Quinoa Turkey Chili - Iowa Girl Eats Gluten-free Crock Pot Sweet Potato and Quinoa Turkey Chili packs a double protein punch with the addition of both lean ground turkey breast and quinoa. Happy Monday, everyone – I hope you had a wonderful weekend! I had a “me day” on Saturday which included getting together with some girlfriends in the morning then spending what felt like 2 hours at Whole Foods.