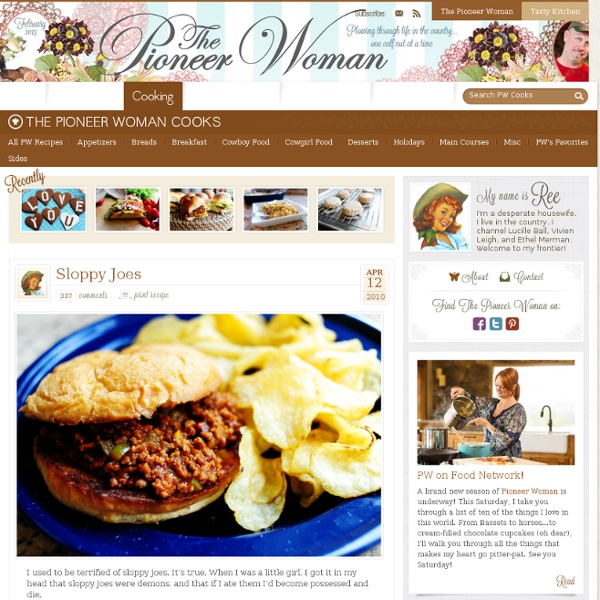 I used to be terrified of sloppy joes. It’s true. When I was a little girl, I got it in my head that sloppy joes were demons, and that if I ate them I’d become possessed and die. Okay, listen. I’ve since come to see the light. And Becky’s made her peace with Vogue magazine. We’ve both grown a lot in our faith. Here’s what you need. First, add the butter to a large skillet or dutch oven over medium high heat. When the meat is brown, drain out most of the fat. You wanna make your cardiologist happy? Next, cut a medium onion in half from root to tip. Then cut in the other direction to dice it. It’s been awhile since I showed you how to dice an onion. It was time. Now cut off the top and bottom of a green pepper or two (depending on the size.) Cut the halves into strips… Then cut up the strips to create a small dice. I’d probably quit within two days because by then I’d be really dang sick of bell peppers. But it would be the best two days of my life. Dice up some garlic, too—several cloves! No.

Stuffed French Bread This recipe is easy peasy and it's one that can feed your whole family! I got this recipe from one of my mom's church cookbooks, which are some of the best cookbooks, in my opinion, because the recipes are tried and true! I've made this one a few times, but hadn't made it lately, because it is hard for only two people to eat an entire stuffed french bread, but I got an idea the other day. Remember this homemade french bread? Why not make a half of a batch and make mini french breads? Genius idea. Stuffed French Bread adapted from: Shauna B. 1 loaf french bread (store-bought or homemade) 1 Lb. lean ground beef 2 Tbl. chopped onion 1/2 c. chopped celery and any other vegetables you like minced garlic salt and pepper 1 can cream of mushroom soup a little milk, if needed 1-2 tsp. 1-2 c. grated cheese chopped parsley, for garnish, opt. Slice of very top of french bread; set aside. Jenn's Notes: I think this tastes great with both store-bought french bread and homemade!

FN - Roast Chicken Salad Sandwiches Directions Roast the chicken: Preheat the oven to 450 degrees F. Rinse the chicken and pat dry; season generously inside and out with salt and black pepper. Stuff the lemon half and herb sprigs inside the cavity, then place the chicken in a baking dish. Make the mayonnaise: Combine the egg yolks, lemon juice and mustard in a large heatproof bowl set over a saucepan of barely simmering water (do not let the bowl touch the water). Make the salad: Add the celery and leaves, the shallot, parsley, chives, tarragon and chicken to the prepared mayonnaise. Photograph by Con Poulos

FN - Open BLT Directions Preheat the oven to 250 degrees F. Arrange the tomatoes cut-side up on a baking sheet; sprinkle with 1/2 teaspoon salt, and pepper to taste. Drizzle with olive oil. Roast until slightly dry on the surface, about 3 hours, 30 minutes; let cool. (The tomatoes can be roasted up to one day ahead; refrigerate in an airtight container.) Whisk the mayonnaise, horseradish, and pepper to taste; cover and refrigerate. Toss the cabbage, red onion, a splash of water and 1/2 teaspoon salt in a colander set over a bowl; let drain until the cabbage softens, about 20 minutes. Meanwhile, cook the bacon in a large skillet over medium-high heat until crisp; reserve the drippings. Toast the bread. Photograph by Jonathan Kantor

Fresh Focaccia with Marinated Chicken and Spinach and Artichoke Spread Recipe : Jeff Mauro Directions Sandwich Build: For the chicken: Marinate the chicken in the Balsamic Base for at least 30 minutes or up to 2 hours in the refrigerator. Preheat a grill pan or grill over medium-high heat. Let any excess marinade drip off the chicken, and then grill the chicken for 5 to 6 minutes per side until cooked through. For the spinach and artichoke spread: Squeeze the drained spinach with a kitchen towel to dry it out. For the sandwich build: Cut the Fresh Focaccia in half equatorially. Balsamic Base: Heat the balsamic vinegar in a heavy-bottomed saucepan over medium heat. Fresh Focaccia: Place the water in the bowl of a stand mixer. In a mixing bowl, combine the all-purpose and wheat flours together with the salt and chopped rosemary. Using the dough hook attachment, mix the dough on medium speed until it becomes smooth and soft, 8 to 10 minutes. Transfer the dough to a clean, floured surface and knead the dough by hand for 2 to 3 minutes.

Chicken Parmesan Subs I know, you don’t think you need a chicken parmesan sub recipe, right? You would think that you could just stick our absolutely delicious recipe for chicken parmesan in a hoagie and all would be well, but you would be wrong. We’ve got a few secrets that are very important. These chicken parm subs were so so yummy. All of the different flavors used in this sammy really come together and make what could look like just another ordinary sandwich into something worth drooling over. First, you need to buy the best bread you can find. A warm and tasty twist on a classic recipe. Ingredients Sauce 2 Small Cans Tomato Sauce 1 Large Can Diced Tomatoes with Garlic and Basil 3 Cloves of Garlic, minced 1/2 Sweet onion or 2 shallots, minced 1/2 Pkg Johnsonville Sweet Italian Sausage 1/2 Lb Ground Turkey 1 Splash Red Wine (we use cooking red wine and I think it works great) salt and pepper Mozzarella For the sandwich 4Hoagie rolls Unsalted Butter Garlic Salt (we prefer Johnny's or Lawry's) Instructions Notes

Patty Melts Who doesn’t love a patty melt? Well, besides vegetarians, people who don’t like rye bread, people who don’t eat onions, or anyone observing a low-fat diet. Which begs the question: Why can I never begin a cooking post like a normal person? Okay, I’ll just put it a different way: I love patty melts. Absolutely, positively to die for. To start, violently grab an onion. Whack it in half… Then cut off one end, peel off the skin… And slice them up! Grab a tablespoon of butter… Throw it into a skillet over medium-low heat… And throw in the onions, honey baby! Stir them around, then let them cook slowly while you get everything else ready. (Name that movie.) Grab some ground beef. Sprinkle in salt… Pepper… And several dashes of Worcestershire sauce! Smush it all together with your hands until it’s all combined… Then form the meat into patties. Real quick-like: stir the onions! Then throw another tablespoon of butter into a separate skillet… And cook the patties over medium to medium-high heat. Amen. Ingredients

Grilled Chicken and Roasted Red Pepper Panini I love panini. I love all varieties of panini. I whipped this one up yesterday. It’s nice and basic, and can be adapted by using storebough/rotisserie chicken if you’d like to omit the marinating/grilling process, and adding things like artichoke hearts and olives if you want the thing more loaded. To me, panini are like pizza or quesadillas: the combinations and permutations are endless. And delicious. We’re going to begin by making a concoction. Throw them into a food processor or blender. Add a little olive oil, a little lemon juice… And a little salt. Next, grab some prepared pesto. Where has all the basil gone? Add a good amount of pesto to the mix… Then pulse up the mixture until it’s all combined. Next, throw half of the mixture into a ziploc bag with two chicken breasts. Seal the bag, smush it around, then refrigerate it for several hours or overnight so the chicken becomes lovely and flavorful and happy and emotionally fulfilled. We all want that for our chicken breasts, don’t we? Yummy.

The MM Sandwich, PW Style Before I begin, let me state for the record that Marlboro Man would not touch this adulterated version of his beloved favorite sandwich with a ten foot pole. He asked me to state that unequivocally, for it is his ardent contention that his beloved favorite sandwich—which appears not only in the earliest days of this website, but also in my cookbook—is perfect as is and needs no adornments. Thus endeth my disclaimer. My side of the story is this: I love the Marlboro Man Sandwich and all. I have needs, is what I’m saying. I’ll stop talking now. The Cast of Characters: cube steak, butter (duh), onion, red bell pepper, green bell pepper, mushrooms, sherry, Worcestershire, garlic, and deli rolls. Ooops. This is cube steak. Why do I have storebought beef when I live on a cattle ranch? 1. 2. 3. Begin by slicing up some green bell peppers: lop off the top and bottom, pull out the innards, then cut the hollowed-out pepper into rings. Do the same with the red peppers… Then slice up some onions. 1.

Barbecue Chicken Sandwiches This is an unusual recipe on The Pioneer Woman Cooks, in that the detailed step-by-step photos don’t begin until halfway through the recipe. But I have a very valid reason for this! A very, very, very valid reason. I didn’t start taking photos until halfway through the recipe. I’m awesome that way. Anyway, that doesn’t take away from the fact that these sandwiches were out-of-this-world good. So I’ll catch you up on what happened before I decided to turn on my brain and take photos: 1. And that’s where we are now! The first thing I did was remove the garlic cloves, which were still intact, and which were almost like candy at this point. Goodness gracious. Set the garlic cloves into a separate dish as you remove them. Remove the chicken from the pot and set it on a board. Then it’s all about removing the chicken from the bone, which is the fun part! After that, just shred away! It’s amazing how much chicken (or pork…or beef) expands as you shred it. fter that, you can throw in the chicken! Ha.

Spicy Mini Meatball Grilled Cheese It’s Friday and we’re eating cheese. And balls of meat. !!! What does that sound so much more terrible than meatballs? Anytime I hear the words “meat” and “cheese” together, my head automatically starts playing Melissa McCarthy’s scene in Bridesmaids that runs during the credits. This is not that. If I even told you how many times we ate meatballs last week, you’d die. Four. As you can imagine, meatballs are not my thang since I don’t love tomato sauce. Last week, I was craving them. We did just that. Then. To say we were meatballed out would be an understatement. SO. At first I was afraid it would be too similar to a meatball sub or even these meatball sliders. This grilled cheese was focused on the CHEESE. One of the only things in life we should really focus on, in my opinion. I mean, right? Print Spicy Mini Meatball Grilled Cheese Yield: serves 2 appropriately, 1 obnoxiously Total Time: 45 minutes Ingredients: Directions: I think that’s just the cutest.

Buffalo Chicken Sub Recipe : Jeff Mauro Directions Preheat the oven to 425 degrees F. Heat a 12-inch skillet over medium-high heat. Add the vegetable oil. Sprinkle both sides of the chicken with some salt and pepper, the brown sugar, paprika and cayenne. Sear both sides of the chicken in the skillet until golden, about 4 minutes. In a bowl, the combine carrots, celery and tomatoes, and season with salt and pepper. Cut the French loaf horizontally. Homemade Ranch Dressing: Mix the mayonnaise, buttermilk, garlic, dill, honey, salt, mustard and pepper in a bowl. Recipe courtesy of Jeff Mauro