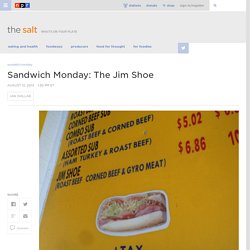 This is one of many ways in which it's like the devil, and Sean Combs. People call it the Gym Shoe, the Jim Shoe or the Jim Shoo. Ian: With a name this unappetizing, the sandwich had no choice but to be so delicious no one would mess with it. It's like A Boy Named Shoe. Blythe: I thought I'd need my Reebok Stomach Pumps for this. Jim Shoe, or the world's most delicious Sarlacc? Itoggle caption NPR Jim Shoe, or the world's most delicious Sarlacc?

We went out to Sony's Submarine to find one. Miles: I wish this had been the shoe of choice during my middle-school years. Blythe: I feel like a fat Carrie Bradshaw right now. Ian: I never get this right — so it's pronounced "yee-roh" and "yastrointestinal distress," right? Sandwich Monday: The Famous St. Paul Sandwich (of St. Louis) 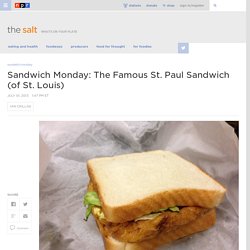 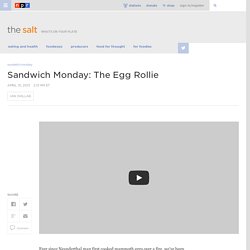 Finally, the Egg Rollie is here. Take a second to watch the video above, then recoil in horror, then read our review. Ian: "EGG-cellent! " I love the way it "EGG-scretes" the eggs! Miles: Say what you will, this is significantly more successful than the time I tried to make an omelet in my toaster. Sandwich Monday: The Land, Sea And Air Burger : Wait Wait ... Don't Tell Me! The McDonald's Land, Sea and Air Burger: a chicken patty, a beef patty, and a Filet O' Fish patty on a single bun. 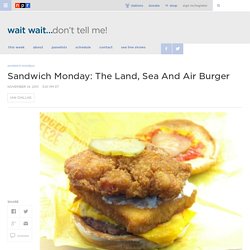 It's on the McDonald's Secret Menu, not because it's exclusive, not even because they're ashamed of it, but because they're protecting us. Eva: I can't tell which meat is which. Ian: Yeah, it's hard to tell what my body is violently rejecting. Ian is disturbed. Sandwich Monday: We're Full.

Because of the limited structural integrity of The Saltwich, Robert had to employ the Butterfly Grip in 2013. 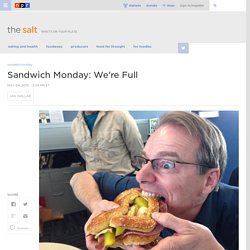 Sandwich Monday: The Ignatius R. No mouths were harmed in the eating of this sandwich. 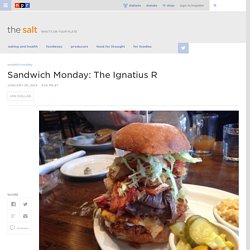 We eat a bacon cheeseburger on two monte cristo sandwiches. : Wait Wait ... Don't Tell Me! We all know the classic fictional sandwiches: the unicorn melt, the möbius five dollar footlong (it's technically more of a wrap). 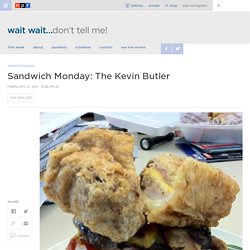 Peter: So this was invented by a video game guy? Mike: Yeah, I think if you eat it you get an extra life. Sandwich Monday: Defining 'Sandwich' : Wait Wait ... Don't Tell Me! Many of you have rightfully noted that the various abominations we eat on Mondays do not always fit into the traditional definition of "sandwich. 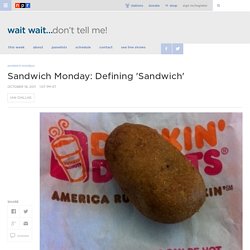 " I'd like to share our philosophy on this matter. For a long time, we've used The Neuhaus Rule: a sandwich is defined as protein encased in bread product. This definition allows us to explore the widest possible wasteland of cuisine. Sandwich Monday: Deep-Fried Cheese Curds. Deep-fried cheese curds. 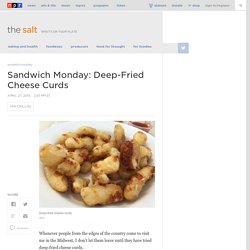 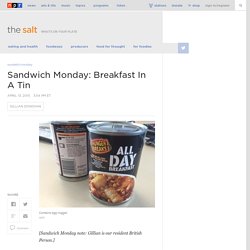 A Sandwich for Monday

Sandwich Monday: Little Caesars' Bacon-Wrapped Crust Pizza. The Bacon Wrapped Crust Pizza, which until now existed only in a shared dream we all had one night. Little Caesars hide caption itoggle caption Little Caesars. Sandwich Monday: Meow Parlour. Image has been altered to protect the identities of people who choose to go to a cat cafe. Sandwich Monday: Girl Scout Cookie Coffeemate. Made with real Girl Scouts! Double Down Hot Dogs Exist. Yes, KFC Has Actually Gone There. If you thought the KFC Double Down was one of the most horrifying fast food items you'd ever seen, then you're probably not going to want to see this.