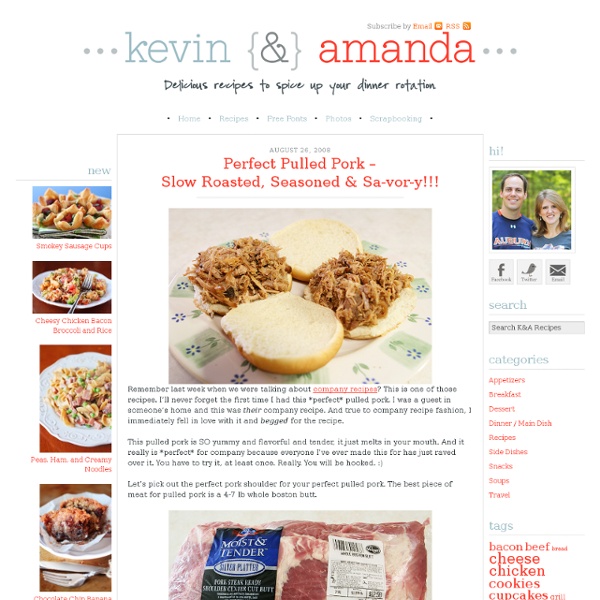 Remember last week when we were talking about company recipes? This is one of those recipes. I’ll never forget the first time I had this *perfect* pulled pork. I was a guest in someone’s home and this was their company recipe. This pulled pork is SO yummy and flavorful and tender, it just melts in your mouth. Let’s pick out the perfect pork shoulder for your perfect pulled pork. Make sure your pork shoulder has a layer of fat on the bottom: And it should also have a bone going about halfway through it. Now, if you notice, my pork shoulder is 7.91 lbs. After you pick out your perfect pork shoulder, you may want to pick up a few other items while you’re out.. You’ll need a 3″ deep roasting pan that’s big enough to hold your pork shoulder so that there is at least 1″ of extra room on all sides. So! Dry Rub 1 tbsp ground cumin 1 tbsp garlic powder 1 tbsp onion powder 1 tbsp chili powder 1 tbsp cayenne pepper 1 tbsp salt 1 tbsp ground pepper 1 tbsp paprika 1/2 cup brown sugar Brine Solution

Oven Roasted Potatoes When I heard this month’s Kitchen Bootcamp Challenge was potatoes, I was pumped. Originally, I had great plans for the sweet potatoes still in my basement from last fall, but after researching and chatting with the hubby, I decided to go with Yukon Gold potatoes instead. My husband isn’t a huge fan of sweet potatoes and I wanted to make something he would enjoy too, so that’s how I settled on this oven roasted potato recipe. Yukon Golds are our favorite potato to grow in the garden and they absolutely melt in your mouth when freshly dug from the garden. I did some more searching through The Professional Chef and on the web and actually settled on a recipe from epicurious.com. Don’t get me wrong, there was nothing wrong with the flavor, just a personal preference as far as how potato-coated my hands were when I was done. Notes:The above link to The Professional Chef is an amazon affiliate link. You Might Also Like:

Spaghetti with Spinach Pesto and Turkey Meatballs - StumbleUpon Whew…that was a stressful weekend…who would have thought a simple update would turn into a nightmare. There we were on Friday night updating our site, when all of a sudden it disappeared! gone…vanished… it was awful … We had wiped out our whole blog, no more recipes, no more comments, no more statistics… nothing. After moments of shock, yelling, screaming, and a few tears we calmed down and found our most recent backup. On Sunday night, after a few struggles, a little more yelling and help from tech support, we got the backup uploaded, we finally had our site back … Crisis averted. We made turkey meatballs, but as usual decided to add a few non-traditional flavors just becasue we could. Spaghetti with Spinach Pesto and Turkey Meatballs Spinach pesto is so easy to make, you can even keep it in the refrigerator for up to 3 days, just make sure you cover it with a thin layer of olive oil and tightly cover with plastic wrap. Created By: Joanne Yield: 4 You Will Need Spinach Pesto Directions Adam

Dubbed recipe and chanced *2 tablespoon Soy… PictureTheRecipe Mexican Pulled Chicken Stuffed Peppers | Life As A Plate - StumbleUpon I had peppers. I had chicken. I had a million errands to run and wasn’t going to be home most of the day. So I enlisted the help of my crockpot and this recipe came together almost by itself. I used a taco seasoning packet – I know GASP – because I was in a hurry and didn’t feel like measuring out my spices which I normally do. What you need: 4 large bell peppers, any color is fine 3-4 chicken breasts, depending on size 2 tbsp chopped jalapenos (I used jarred) 1 c. diced tomatoes1/2 c. the tomato juice from the can OR 1/2 c. chicken broth 1/4 c. finely minced onion 1/4 c. chopped green peppers (can use organic canned) 2 c. salsa (to cook the peppers in) shredded cheese 1 package of Simply Organic Taco Season OR Use my homemade taco seasoning recipe:1 tsp. salt 2. tsp. onion powder 1 tsp. chili powder 1/2 tsp crushed red pepper 1/2 tps. garlic powder 1/4 tsp. oregano 1/2-1 teaspoon ground cumin, depending on your preference What you do:

Chipotle Roast For Tacos Sandwiches Recipe - Food.com - 59224 I've been trying various chipotle meat recipes for a while. This is my favorite so far! Easy as all get out, spicy and tasty! I put the trimmed roast into the crockpot, then combined all the other ingredients into my blender. Make the Tamales (III) Make the Tamales Hot Tamale Ingredients | Cook Tamale Meat | Make Tamales OK, you gathered the equipment, you went shopping with the My Hot Tamale shopping list, you cooked the meat, and you saved the broth. Now, for those of you who did not follow the part II instructions which clearly said to save the meat broth (you know who you are). . . your tamales are not going to taste as good as the people who did follow the instructions, and did save the broth. OK, enough of the chit chat. A) Make the Masa Dough Mix: Start with 2 lbs. of the Masa flour. Now put the 2 lbs. of Masa in a large bowl. 3 Tablespoons paprika 3 Tablespoons salt 1 Tablespoon cumin seeds 3 Tablespoons Gibhardts Chili Powder 3 Tablespoons garlic powder Mix the spices above into the Masa until it is completely incorporated. Now add: 2 cups of Corn Oil to the Masa and Spice mixture. B) Prepare the Corn Shucks Soak the shucks in a sink full of warm water for about 2 hours. C) Build the Tamales Congratulations!

Lasagna Soup Lasagna Soup This Lasagna Soup is truly like lasagna in a bowl. The flavors are lovely. And the ooey gooey cheesy concoction at the bottom of the bowl is YUM! With spring officially arriving last weekend, this house could pretty much assume that soup would be a rarity for a few months. I’m just not the kind to put a hot pot on the stove during the spring and summer, unless we have some unseasonably cool weather. But just as soon as spring finally decided to peek out, it disappeared. Gone. Nowhere to be found. When we awoke Wednesday morning, it was to the broadcast of yet another winter storm warning. But you know the saying…“if you can’t beat ’em, join ’em”… So I made soup! I found this Lasagna Soup recipe in our local Kowalski’s Markets magazine, originally from the cookbook 300 Sensational Soups. The soup is truly like lasagna in a bowl. I substituted mafalda pasta for the recipe’s fusilli, because aren’t they just the cutest mini lasagna looking noodles you ever did see? Lasagna Soup

Fall-Apart-Tender Slow-Roast Pork Butt Recipe - Food.com - 247715 cancel TOP Filters What's in Your Fridge? Browse By: Next Recipe Stumped for dinner? Recipe Box Grocery List Print Share How to Roast Meats (2:06) More Foolproof tips for prepping and roasting meat to your desired doneness. More Videos Total Time 4hrs 10mins Prep 10 mins Cook 4 hrs Pork butt is a less-expensive cut, but cooking at a very low temperature ensures a tender, juicy roast, and it dissolves fat and connective tissue, This can also be made in a slow cooker set on high for 30 minutes, then turned down to low for the day, oven cooking time will vary depending on the size of your roast -- I have made this in the past, and it is very good! Skip to Next Recipe Ingredients Nutrition 1 (4 lb) pork shoulder butt, roast whole garlic clove (optional, use as many as desired) 1⁄3 cup Lea & Perrins Worcestershire Sauce 3⁄4 cup light brown sugar 1 1⁄4 cups unsweetened apple juice 1⁄2 teaspoon salt 1⁄2 teaspoon fresh ground black pepper (or to taste) Check Out Our Top Pork Recipe Directions

Naan Recipe: If You Can Make Pancakes, You Can Make Naan Naan is one of my favorite components of an Indian meal. Sometimes when I go to an Indian buffet, I’ll hit the buffet one last time for naan only so that it is the last flavor in my mouth when I walk out the door. What is Naan? Naan is an Indian bread that is similar to pita, but so much better (don’t even try to debate it with me)! Why Did I Make a Naan Recipe? How Did the Naan Recipe Compare to Naan I’ve Tried at Indian Restaurants? I won’t say that this naan recipe was better than that of the naan I get at my favorite Indian restaurant. The Naan Recipe Naan Recipe: If You Can Make Pancakes, You Can Make Naan Ingredients 3 1/2 C all-purpose flour 1/2 t salt 1 t instant yeast (It is VERY important that you use instant yeast. Instructions Dissolve the yeast and sugar in the milk. Roll out into triangles, dusting lightly with flour as needed. Will There Be Naan Cupcakes?

Buffalo Chicken Bites One of my favorite guilty pleasures is buffalo wings, especially dipped in blue cheese dressing. There's something about the buffalo chicken and blue cheese combo that really appeals to me and I had a craving for it lately. When I came across a recipe for ham and cheese stuffed pretzel bites, I figured I could substitute it with chicken and blue cheese. That's when I decided to make these Buffalo Chicken Bites... yum! These are such an awesome snack, which could be a meal in itself if you have enough of them. It's not hard since they are addictively delicious! I plan on making these again and experimenting with other fillings such a steak, provolone, sauteed peppers and onions for Philly Cheesesteak Bites... or even pepperoni, italian sausage, mozzarella and mushrooms for Pizza Bites. Buffalo Chicken Bites 2 1/4 teaspoons rapid rise dry yeast 2 tablespoons brown sugar 1 cup warm milk ( I used 2%) 2 1/2 cups of flour Preheat oven to 400°F with rack in the middle of the oven.

Cinnamon Toast Rolls - Circle B Kitchen The USDA released its new food pyramid the other day (which is actually a plate now instead of a pyramid), and I am sorely disappointed to report that cinnamon rolls did not appear anywhere on that plate. I think by now most of us know what should be on our dinner plate in terms of healthy, well-rounded nutrient-laden meals, but it is my considered opinion that our breakfast plate should include cinnamon rolls now and then. And not just any cinnamon roll, mind you, but how ‘bout a homemade cinnamon roll hybrid that is a cross between a cinnamon roll and cinnamon toast, is super easy to make and gosh darn delicious. In honor of their ancestry, I call these little gems cinnamon toast rolls, and here’s all you need to make them… Yep. Trim the crusts off of the bread Roll the bread really flat Brush both sides of the bread with butter Sprinkle with cinnamon sugar Roll in any fashion you like (I’ve also folded them into little triangles) Cinnamon Toast Rolls Click here for a printable recipe