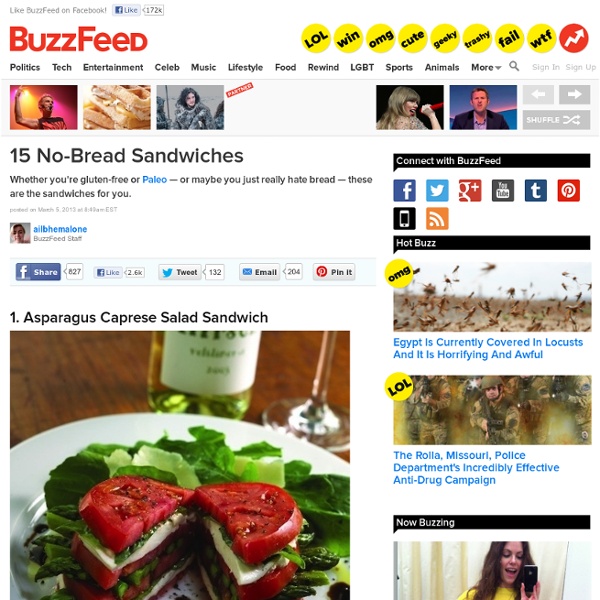 10 Fancy Grilled Cheese Sandwiches You Can Eat As An Adult April is here which means springtime has finally begun. While we wait it out for the warmer spring weather, why not grab a toasted grilled cheese to help keep you satisfied during those rainy April-shower days (with a bowl of hot tomato soup on the side, of course)? Grilled cheese sandwiches are one of the most-popular childhood meals and always bring a smile to our face now that we are in our adulthood. Putting a twist on the regular old grilled cheese makes us grown-ups feel fancy as we channel back to our more simple days in childhood. Here are our 10 fancy grilled cheese sandwiches you should try as an adult: 1.

Parmesan Roasted Potatoes Recipe Ok fine. I’m officially ready to make the transition to fall. And I thought, what better way to do it than with my all time favorite Parmesan Roasted Potatoes! These are like candy. 100% addictive. Once you stop, you just can’t stop. Top 11 Biggest Lies of Mainstream Nutrition There is a lot of misinformation circling around in mainstream nutrition. I have listed the worst examples in this article, but unfortunately this is just the tip of the iceberg. Here are the top 11 biggest lies, myths and misconceptions of mainstream nutrition.

This Is The Second Best Sandwich Ever Made Another Mega-wich was created ! this thing is starting to get off , for those of you who don’t remember , we introduced a while back the first Mega-wich and possibly the best sandwich ever made . this is yet another version of it and it just may be the new challenger . what do you think ? better than before ? here is how to make it : health by chocolate Raw Dark Chocolate with Goji Berries. Doesn't that just sound sexy? Yes, it does. All this glorious chocolate has in it is cacao, coconut butter and a bit of natural sweetener. I added some vanilla, mesquite, sea salt and goji berries for extra decadence and some colour.Who would've thought eating chocolate could add nutrition to your diet? This chocolate may help you live longer (with healthier skin and hair, and less stress).One more plus?

Buttered Beere 1588 Recipe Small Goblets Of Buttered Beere From A 1588 Tudor Recipe This is an authentic Tudor Buttered Beere (Butter Beer) recipe from 1588 and a rich, creamy ale (beer) is called for – but don’t get an ale which is too sweet, as we are adding in sugar as well as egg yolks. The best ales (beer) to buy are traditional ‘real-ales’ (or cask conditioned ales) from a British brewery with a good reputation (see the end of the post for recommendations). Milky Way Brownies Recipe I began the day yesterday with a desire to create some sort of candy bar-infused brownie. ‘Snickers‘ first came to mind. The thought of all of that caramel oozing its way through a mass of fudgy brownie sounded like a good idea to me. There was a problem though… NUTS were ruining my vision of the most decadent brownie ever. So I went the route of the Milky Way instead and created:Milky Way Brownies The mini-sized Milky Ways were chopped up and added to the batter.

The Ultimate Guide to Paleo Ice Cream Recipes I love ice cream I love being lean, fit & healthy Most people would say that these two passions are incompatible. The Best Things Since Sliced Bread—21 Unexpected Sandwich Recipes The great thing about sandwiches, well one of the great things, is that they are a complete meal in one easy to eat package. The not so great thing? It’s easy to get stuck in a rut and eat the same sandwich day after day. Cauliflower Crust Grilled Cheese Don’t worry people, I’m going to cauliflower crust rehab in a day or so. They say the first step in solving a problem is to admit that you have a problem. So, here it goes: “Hello, my name is Mike and I’m a cauliflower crust addict” “Hello Mike” “Over a year ago I’ve first tried cauliflower crust and since then I’ve been making it at least twice a week. It started out with pizza, then it was calzone, hot pockets, breadsticks and stromboli. I can’t seem to stop. I need help!”

Perfect Iced Coffee Iced coffee is my life. When I wake up, often around the time party animals on the west coast are just heading home, I start each day not with a cup of freshly brewed hot java, but with a tall, blessed glass of creamy iced coffee in a glass. I’ve been an iced coffee freakazoid for years and years.