31 Grilled Cheeses That Are Better Than A Boyfriend 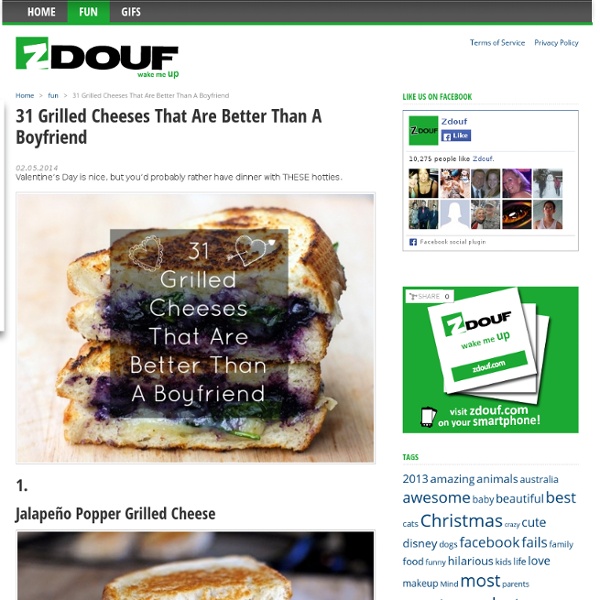 Valentine’s Day is nice, but you’d probably rather have dinner with THESE hotties. Jalapeño Popper Grilled Cheese You can have this sandwich AND still be available for Ryan Gosling. Recipe here. Bratwurst, Sauerkraut, and Muenster Grilled Cheese on a Soft Pretzel Sausage, cabbage and muenster all tied up in knots, just like your heart. Pulled Short Rib Grilled Cheese with Pickled Red Onions This sandwich will always let you have control of the Netflix. Balsamic Blueberry Grilled Cheese Roses are red, this amazing sandwich masterpiece is blue. Lasagna Grilled Cheese Ricotta, tomato and basil will never sign up for an OKCupid account “just to take the quizzes.” French Onion Soup Grilled Cheese Caramelized onions are way tastier than a box of Whitman’s caramels from Rite Aid. Vegan Pear, Raspberry & Tempeh “Bacon” Grilled “Cheese” You won’t miss the meat — or the significant other. Monterey Chicken Grilled Cheese Who has time for dating when there’s BACON, CHEDDAR AND BBQ SAUCE??? Brie mine.

This Is The Second Best Sandwich Ever Made – Another Mega Wich – The Awesome Daily - Your daily dose of awesome Another Mega-wich was created ! this thing is starting to get off , for those of you who don’t remember , we introduced a while back the first Mega-wich and possibly the best sandwich ever made . this is yet another version of it and it just may be the new challenger . what do you think ? better than before ? here is how to make it : 1 : First thing is to fry some sweet onions Basic Beer-Can Chicken This is the basic recipe for beer-can chicken whose origin has as man stories as there are grill cooks. The one I like goes something like this. A barbecue pitmaster had been drinking beer—the official sanctioned barbecue circuit beverage--all day when he realized that he was going to need to eat something if he was going to last all day and into the next morning tending his slow-cooked barbecue.

50 Milkshakes : Recipes and Cooking Each recipe makes 2 milkshakes. 1. Vanilla: Blend 1 pint vanilla ice cream, 1/4 cup milk, 1 teaspoon vanilla and a pinch of salt. 2. Toasted Marshmallow: Broil 8 marshmallows on foil, turning, until browned. Make Vanilla Milkshakes (No. 1), adding 6 of the toasted marshmallows. 30 Min. Clean Thai Turkey Zucchini Meatballs Today is not a story day. Today is super awesome meatballs day! I got my new dishwasher that can even make Thai meatballs.:) In all seriousness, we have a deal: I make the meatballs and he does the dirty job. And he knows his job really well. Meatballs don’t have to be smothered in tomato sauce, nor they have to be simmered for hours. They can have your favourite Thai flavours, be cooked in a skillet, within 30 minutes.

Essential Cocktail Recipes: 30 Best Whiskey Drinks For the most part, we prefer to drink our whiskey neat. Whether it be our favorite single malt Scotch, or a good ‘ole American Kentucky bourbon. Pour a finger’s width or two of pretty much anything good, and we’re happy campers. soft pretzel buns and knots Guess what we’re making this weekend? I have been obsessed with make soft pretzels at home since about 16 seconds after I learned that you could, 7 years ago. For something that looks so twisted, dark and complex, they’re actually simple to make, requiring only a basic bread dough (flour, water, salt and yeast), formed into pretzel knot (a rope with the ends twisted together, then folded back over itself), dipped briefly in a baking soda solution, salted, and baked until pretty. This is almost exactly the way they are made in southern Germany and surrounding pretzel-loving regions, save one bit: instead of a baking soda bath, the pretzels are dipped in a lye solution. Lye, as in the poison.

18 Food Replacement Hacks that Make Healthy Eating Easy I'll admit it. I think it's difficult to eat healthy all of the time. I do pretty well most of the time, but the best technique by far that I've used to be sure that I'm eating healthy meals regularly is to simply replace unhealthy ingredients with something healthier. I don't mean replacing it in your recipe... I mean trying to replace it in your kitchen or pantry. I know that these aren't all perfect replacements that work in every single recipe, but in general, I've found them to be healthier options that work in a lot of recipes. What to Eat When You Have No Food When You've Got Eggs... Hana Jakobs 16. ...and cheese.